Today we have a special Sunday Snippet post. Not only is author Stacy Gail sharing with us a sneak peek of her upcoming title, Dangerous Angel, but she’s also got a FABULOUS GIVEAWAY for our readers! Be sure to keep reading for all of the details! Now… I’m turning it over to Stacy…

Before we begin, I’d like to thank Jen for allowing me to pop onto her blog to chat about DANGEROUS ANGEL. I’m so excited about this release, as it’s the action-packed conclusion to The Earth Angels, a miniseries published by Carina Press, and the culmination of a project I’ve been working on for almost two years. I hope you enjoy this snippet between the hero and heroine, Kyle and Nikita! Now, to set the scene…

Nikita and Kyle are the two most successful bounty hunters in Miami. In the opening of DANGEROUS ANGEL, they were both after the same “jump” or fugitive, but it was Nikita who collared him first. She did it by posing as a stripper, and snatched the jump right out from under Kyle’s nose.  Needless to say, Kyle was frustrated with the outcome…

I hope you enjoy the first scene of interaction between the hero and heroine, Kyle and Nikita! *crosses fingers*

“Nikita, I’m going to tell your tía on you.”

In the process of slipping on a pair of sunglasses, Nikita glanced up in surprise to find the one and only Kyle Beaudecker leaning against the black SUV she’d left parked in the Miami-Dade County Jail visitor’s lot. She adored her ride. It was tricked out with a bench-style backseat positioned too far away to kick the driver’s seat, a thick steel grating between the back area and the driver’s cab, locks controlled solely by her, and black-tinted rear windows. Not to mention it had a smoking-hot sound system that made it sound like The Gypsy Kings were in the car with her.

“Don’t get your nasty ass-prints all over my baby, cabrón.” It was a tough job, injecting irritation into her tone when simply looking at Kyle was one of her all-time favorite things to do. It had been that way for as long as she’d become a licensed bounty hunter at the age of twenty-one, and her very first solo bag-and-tag had gone sideways when he’d beaten her to the punch. Ever since she’d lost her first bounty to the man she’d come to think of as Hurricane Kyle, he had been on her radar as the number-one man in her universe to watch.

And watch him she did. Though she was on the tall side of five foot ten, Kyle towered over her by at least half a foot. That alone would have made him stand out, but the shoulder-length tangle of sun-bleached hair, heavy-lidded blue-gray eyes and sun-kissed golden skin stretched tautly over a lean yet muscular frame was just what her inner doctor ordered. For years she’d suspected Kyle could be a cure for whatever ailed her—or any other woman with a pulse. In fact, he’d be downright perfect if he didn’t have an irksome habit of showing up when he wasn’t wanted.

“What are you going to tell her?” Nikita shook her unruly hair back as she hit the button to remotely unlock the tailgate. “She’d probably love hearing how you missed making an easy fifty-grand today. Especially since I was the one who got there first.”

“I doubt Yolanda would be thrilled to hear about how you did it, Sparkle Spanksalot.”

“Like I had any choice in that stupid name Dodie chose,” she began, then screeched to an abrupt halt in the process of dumping her bag and paperwork into the neatly organized car-crates in the back. The crates had been where she’d grabbed an extra pair of jeans and a T-shirt to slip over the spangled bikini, and she couldn’t wait to get its itchy material off her body and into the nearest open flame she could find. “Wait.”

“Yes?” Ever-helpful, Kyle propped an elbow on the roof of the car and grinned at her like the Cheshire cat. She hated cats.

“What did you just call me?”

“Sparrrrrrr-kle.” He leaned forward until they were almost nose-to-nose. The breeze brought his scent to her—the familiar after-a-storm fresh scent…and the smoke-polluted sex of The Toy Box. “Spanks. A. Lot.”

She’d kill him. No court in the land would convict her. “You were there? You saw?”

“Oh, yeah.” His heavy-lidded eyes, always lazy and smiling as if with some secret joke he wasn’t about to share, were alive with an avid light. “I saw everything.”

“Not everything.” More appalled than she’d ever admit, Nikita lifted her baggy T-shirt and flashed the heavily disc-spangled undergarment at him as if it were Mardi Gras and she wanted some beads. “Nobody saw these.” 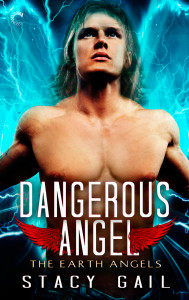 Miami’s best bounty hunter, Nikita Tesoro will do anything to collar a fugitive, including stepping into a stripper’s stilettos for the night. Outsmarting her rival Kyle Beaudecker is just a bonus. Despite the sexual tension sparking between them, Nikita keeps a professional distance from “Hurricane” Kyle. After all, she can’t get hurt if she doesn’t care.

A descendant of the archangel Barakiel with the power to harness electricity, Kyle should be focusing his energy on tracking down a demon that may be hiding in the human realm. But he’s a lover, not a fighter, and he’d much rather use his special talents for pleasure: specifically Nikita’s. And teaming up to find a bail jumper means spending lots of time together…

But when their case takes a turn for the demonic, Kyle can no longer hide his true nature from Nikita. He’ll do whatever it takes to win her heart—even stop the apocalypse. But he can’t do it alone.

Wow, you read all the way to this point? You should be rewarded with… a DANGEROUS ANGEL giveaway! ^_^

Stacy is generously donating some AWESOME prizes to three (3) lucky readers. To enter, please fill out the Rafflecopter form AND leave a comment at the end of this post telling Stacy: What do you love most about paranormal romance? The giveaway is open during the time specified on the Rafflecopter form. Winner(s) chosen at random from all eligible entries. This contest is open internationally where not prohibited by law. Open to participants, 18 years or older, who are legally allowed to participate in such a contest as allowed by their local laws. All federal, state, local, and municipal laws and regulations apply. Void where prohibited. No purchase necessary. By participating in the contest, participants agree to be bound by the decisions of the contest sponsor. Prize will be delivered by the author. I am not responsible for items lost in the mail. By entering this giveaway, participants agree to abide by these terms. For more information on the Dangerous Angel Blog Tour visit: http://stacygail.blogspot.com

A competitive figure skater from the age of eight, Stacy Gail began writing stories in between events to pass the time. By the age of fourteen, she told her parents she was either going to be a figure skating coach who was also a published romance writer, or a romance writer who was also a skating pro. Now with a day job of playing on the ice with her students, and writing everything from steampunk to cyberpunk, contemporary to paranormal at night, both dreams have come true.