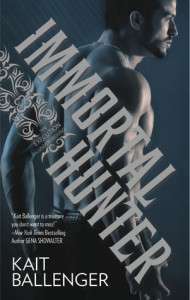 WITHIN FIFTEEN MINUTES David reached the address.  Shutting off the ignition and setting the kickstand, he parked his bike on the street several houses away.  He quickly jogged toward the house, ignoring the shooting pain coursing through his leg.

As he crept up the porch steps, the hairs on his arms and the back of his neck stood on end.  His senses heightened, he listened for the sound of screams or yelling from behind the door.  Nothing.  He breathed deep, preparing himself, then froze.  The smell of rotten eggs hit his nose, and then he swore under his breath.  David knew that smell.

Without hesitation, he slammed into the front door with his full weight.  It caved in after two hits from his two-hundred-plus pound frame.  Thank God for flimsy locks and no dead bolts.  When his leg still functioned well, one kick would’ve done the trick.  He frowned at that thought.  As he stepped through the broken doorway, he pulled his gun and cocked the hammer, preparing to shoot.  He was so ready to try out those new bullets.  Holy-water-filled bullets wouldn’t kill a demon, but they would definitely slow it down for a few moments, and that was all he needed.

He listened intently, trying to get a sense of where the demon was.

After a quick scan of the round floor, he called out, “Is anyone home?”

An eerie silence answered.  The quiet was too absolute.  No sounds of talking or movement.  His stomach dropped, and something inside told him he wasn’t searching for a demon anymore.  He was searching for its victims.  Its dead victims.  Agony seared through his leg as he climbed the steps faster than his pain-in-the-ass physical therapist would have approved of, but he wouldn’t allow that to hold him back.  Not again.  Three bedrooms to scan.  Slowly he pushed open the door to the first and stepped inside.  From the size and decor, definitely the master bedroom, probably where the wife, who’d called Father O’Reilly, and her husband slept.  Unlike the rest of the pristinely organized room, the comforter and bed sheets lay in a twisted bundle, as if someone had shoved them off in a rush to jump out of bed.  Otherwise, no signs of anything out of the ordinary.  But there was no way he had the wrong house, not with the sulfur he smelled.  Even old rotting Easter eggs leftover from the previous holiday didn’t smell that potent.

He moved to the next bedroom, gun still drawn.  He peaked inside: the room of a teenage boy.  Sports memorabilia and a game system, but nothing unusual, just another messy bed.  Turning toward the last room at the end of the hall, David stared at the open doorway.  A shiver ran down his spine.  Most people would have run in the other direction.  It didn’t matter what dumbasses movies made the average citizen look like; in the real world, when people felt threatened, they ran, which honestly was the smartest thing to do.  Instincts served a good purpose.  But it was David’s job not to run.

With a deep breath, he stepped inside.  Immediately he lowered his gun.  He was standing inside a baby’s nursery.  He turned on the light and blinked rapidly as his eyes adjusted to the sudden brightness.  From the pale pink molding on the white painted walls and the small onesies lying in a neatly folded pile on a changing table near the crib, he could tell the room was meant for a baby girl.  His stomach twisted into knots.

Not again.  Dear God, not another baby.