Hello hello! I’m Heidi Belleau, and welcome to the Riptide Books Straight Shooter blog tour! Straight Shooter is the third (and final?) novel in my Rear Entrance Video series, and is the story of roommate Austin, a homophobic hockey player with a kinky secret . . . and the Dominant porn star who helps him get his act together. For the next two weeks, I’ll be hopping blog to blog giving you an inside look at the novel . . . and also giving away a prize! Read on for details! Thanks to That’s What I’m Talking About and to all of you for tuning in!

I read in your blog that you have quite a few new projects in progress (or in the planning stages). Is there a particular one that you’re especially excited about?

I’m excited about all of them, but especially Dead Ringer, the moody new adult romance with a classic movie aesthetic all about a modern young man who shares an uncanny resemblance with his famous silver-screen star grandfather who died young . . . and the men who hire him as a rentboy hoping to live out their fantasies about his grandfather. It’s gonna be dark and twisty and emotional and I can’t wait to get started on it.

In writing your more explicit/darker stories, what do you hope your readers will take away from the experience? 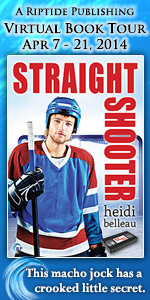 Among your characters are there any that you hold an especial fondness for?

Oh yes! I’ll always have a soft spot for Sean from The Druid Stone and Cruce de Caminos, since he was basically my first character in this whole business, and he’s so sweet and authentic and good you can’t help but love him. I also love Bobby from the Rear Entrance Video series. He grows so much over the course of the three books that I fell in love. I’d say he’s the real star of the series.

Is there one particular story (or series), of all the ones you’ve written, that you enjoyed more (or found more rewarding, cathartic, or entertaining) than the others?

I had a fabulous time writing King of Dublin with Lisa Henry. It’s an exercise in pure id, AND I got to work with one of my favourite authors, AND I got to geek out about Ireland! It was 100% fabulous.

With your busy schedule, do you ever get some down time? If so, what books do you like to read when relaxing? Do you have a favorite genre? 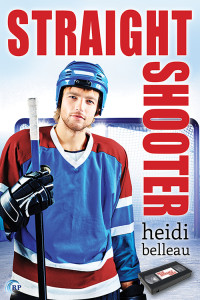 Heidi Belleau was born and raised in small town New Brunswick, Canada. She now lives in the rugged oil-patch frontier of Northern BC with her husband, an Irish ex-pat whose long work hours in the trades leave her plenty of quiet time to write. She has a degree in history from Simon Fraser University with a concentration in British and Irish studies; much of her work centered on popular culture, oral folklore, and sexuality, but she was known to perplex her professors with papers on the historical roots of modern romance novel tropes. (Ask her about Highlanders!) Her writing reflects everything she loves: diverse casts of characters, a sense of history and place, equal parts witty and filthy dialogue, the occasional mythological twist, and most of all, love—in all its weird and wonderful forms. She also writes queer-flavoured M/F as Heloise Belleau.

Comment to win! I’m giving away digital copies of books one and two of the Rear Entrance Video series (that’s Apple Polisher and Wallflower) to not one, but two lucky commenters on this tour! All you gotta do is leave a comment on this post with a way to contact you (and if your preferred method of contact is email, make sure to put that in the body of the comment, not just in the blog’s form—I can’t see that info! Each comment counts for another entry in the draw, so be sure and follow the entire tour. Entries close at midnight, Eastern Time, on April 21, and winners will be chosen on April 23rd. Contest is valid worldwide.