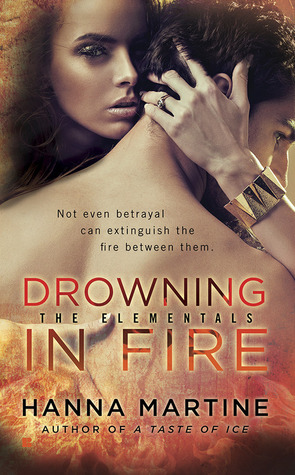 Drowning in Fire is the third novel in The Elementals series.  After much discussion, Gikany and Una liked this offering, but with one strong reservation.

First, we love this world that Ms. Martine has created. This sizzling mix of paranormal romance with a hint of science fiction is thoroughly fascinating.  The different Secondaries (Primaries being those from Earth) with their own abilities linked to the elements are intriguing.  With Drowning in Fire we are finally able to see each of these secondary groups: the Children of the Earth, Air, Fire, and Water.  There is one other group, Spirit, but they are absent during the course of this novel.  We hope to learn more about that elemental group in future books.  There is much that transpires in the other elemental groups, most notably the Air and Children of the Earth.  We eagerly wait to see what happens with Aya and Jase.

However, Gikany and Una did have an issue.  Keko, our heroine, was just the type of personality that we could not relate to.  She is a perfect product of the Chimeran people – a strict caste warrior-like culture.  This is not a compliment.  We found her for most of the novel to be selfish, brash, and quick to action without any thought of consequences or circumstances.  It is not until over halfway through the novel, and some serious introspective growth on her part, that we began to stop disliking her.  By the end, we would still never be buddies with her, but she was at least palatable.  As much as we love Griffin, we just could not see the connection between the pair.  We understand that it must be one of those soul-deep opposites attract and find balance connections, but it is just not something that we were able to connect with as readers.

As Drowning in Fire concluded, we were pleased to see that some of what created and fueled those aspects of Keko we disliked, are the elements that faced major changes.  We are happy to report that it does seem like Griffin and Keko will have a happily ever after, although we are still wondering if Griffin still has his job as this conflict was not resolved by the end of the book.  In The Elementals series, each book has a different couple as the focal point and the ending typically resolves all the couple’s conflicts; however we felt that in this case, there were still some open-ended concerns.

Despite the huge issue of disliking the heroine, the novel was gripping.  We are completely intrigued by the plot points left hanging at the end of Drowning in Fire that we cannot wait to read the next in The Elementals series.  If you like a little science fiction with your paranormal romance, pick up this series and enjoy!

Our Rating:  B- Liked It, but we had a few issues

Hidden in the Hawaiian islands, there is magic pure enough to heal a broken heart.

In his last audience with the Senatus, Griffin hoped to establish a connection between his water-wielding race and the other elementals. Instead, he found himself drawn into a forbidden affair with the Chimeran general Keko. When it ended in a storm of fire and ice, Griffin was banned from the Senatus and Keko was stripped of her status.

Just as Griffin is given a second chance to prove himself worthy of a Senatus seat, he gets a call from Keko. Despite how it ended between them, she wants to hear his voice one last time before embarking on a suicide mission to save her people and redeem her name.

Despite her good intentions, members of the Senatus want her stopped—and Griffin volunteers to go after her. As he tracks his former lover through the untamed Hawaiian wilderness, she leads him straight to the source of all fire magic. But will the intense power they discover draw them back together or destroy them both?