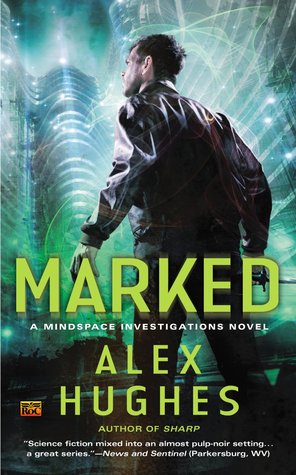 Marked is the third novel in the fascinating Mindspace Investigation series.  Gikany and Una continue to love both this gripping and interesting world, along with Adam West, the deeply flawed hero we cannot help but cheer for.

*Please note: this will be a somewhat vague review due to the fact that several wonderful elements in the novel cannot be adequately discussed without spoiling the ending.  We flatly refuse to spoil a novel so bear with us and understand that we thoroughly enjoyed this latest offering.

The novel starts shortly after the conclusion of the previous novel, Sharp.  Adam is still recovering from the events of the last novel the best way he can: by spending time in the interview rooms and assisting Cherabino in her investigations.  However, after returning a call from his ex-fiancée, Kara, Adam finds himself in a tangled mess of trouble within the Guild.  This is the absolute last place he should be considering his disgrace and the scorn the Guild members heap on him.

Gikany and Una love this futuristic world.  Ms. Hughes has masterfully captured a futuristic urban fantasy world in the Mindspace Investigations series.  It is easy to slip into this world that is still recovering from the Tech Wars.  The Tech Wars were caused by ever advancing technology and resolved by the incredible telepaths, which now equate to both telepaths and technology being distrusted by non-telepaths or normals.  In Marked we get the true sense of distrust that exists between these two groups.  We are not surprised that normals have no faith in the Guild – they are a bunch of pompous jerks.  However, we have witnessed the prejudice that Adam has endured as a telepath (and as a recovering addict) working among the normals.  Maybe it is because of this that Adam is able to navigate both groups (poorly at times, but he is our unlikely hero) – trusted by neither but wanted and used by both the Guild and normals.  As much as Adam is a pawn, he is also a key player.

Next to the allure of the world, what draws us in is our protagonist, Adam.  He is an interesting choice for a hero.  Not only is Adam unlikely to be selected as a hero or most likely to succeed, but throughout the novel we wait for him to give up.  Adam is a tainted soul – he was an up and coming, extremely talented telepath that fell into addiction and lost his job, his place in the Guild, and his fiancée.  Over the past ten years, Adam has crawled his way up to a somewhat decent level of being.  However, over the course of the series we have noticed something about him.  No matter how hard he strives and reaches for redemption, he inevitably finds himself kicked down, tumbling and struggling for a bit.  Yet, when he stops to see where he is, he amazingly emerges still tarnished, but better than he was before.

Addiction is a powerful foe, one that Adam has not completely vanquished but continues to fight.  We admire his stamina and courage, even when it seems he has lost both.  He is the underdog you cannot help but cheer on and encourage, hoping that he will eventually redeem himself.  Through the course of Marked, we celebrated watching him learn that he not only has Schwartz and Cherabino to rely on and answer to, but also, most importantly, himself.

The mystery behind the murder was gripping and the twists were not so easy to anticipate.  We enjoyed how what appeared to be different plot arcs were woven together into a main plot arc.  Between the excellent character writing, fascinating futuristic world and the thrilling detective mystery, it is a miracle Gikany and Una have fingernails at the conclusion of Marked.

If you haven’t tried the Mindspace Investigations series yet, you really should.  We love this series.  It is a wonderfully crafted character driven futuristic detective drama with our woefully inept but determined hero, Adam.  We encourage you to start from the beginning, as there are elements to Marked that will have a deeper impact if you have the character connections that begin with Clean, the first novel.  We hope you enjoy!

Freelancing for the Atlanta PD isn’t exactly a secure career; my job’s been on the line almost as much as my life. But it’s a paycheck, and it keeps me from falling back into the drug habit. Plus, things are looking up with my sometimes-partner, Cherabino, even if she is still simmering over the telepathic Link I created by accident.

When my ex, Kara, shows up begging for my help, I find myself heading to the last place I ever expected to set foot in again—Guild headquarters—to investigate the death of her uncle. Joining that group was a bad idea the first time. Going back when I’m unwanted is downright dangerous.

Luckily, the Guild needs me more than they’re willing to admit. Kara’s uncle was acting strange before he died—crazy strange. In fact, his madness seems to be slowly spreading through the Guild. And when an army of powerful telepaths loses their marbles, suddenly it’s a game of life or death.…

Reviews in the Series:
Sharp by Alex Hughes  (Mindspace Investigations #2)