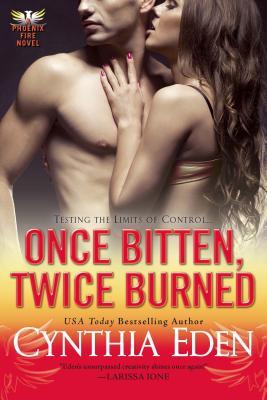 The second book in the Phoenix Fire series, Once Bitten, Twice Burned, overlaps chronologically with its predecessor, Burn for Me. The story begins with Ryder, a powerful vampire we met in the first book, still captive at the Genesis Laboratories. Unlike the first book, Once Bitten, Twice Burned does not spend much time explaining what Genesis is or go into the details of Richard Wyatt, the ruthless, evil head of Genesis, which allows for more action and direct conflict – giving the story a better overall flow.

We also meet Sabine Acadia, a female captive who is unaware of her paranormal nature. As the story opens, Wyatt has denied Ryder of blood for months. When Wyatt tosses Sabine in Ryder’s cell as one of his sadistic experiments, Ryder can’t help but take blood from Sabine and immediately recognizes her blood as different than any other he’s ever had. It is addictive to him–he can’t get enough–killing her in the process. But since Sabine is a phoenix, she burns and rises from the ashes, which is a complete shock to her. Now it’s up to Ryder to figure out how to save Sabine and escape the hell in which they are trapped.

Once Bitten, Twice Burned is an exciting and engrossing paranormal romance. I found that I was completely drawn in right from the start, even though the beginning held some repeat from the first book. Ryder and Sabine have incredible chemistry: a palatable, aching needed that continually brings them together. Their sex scenes are some of the hottest I’ve read in a while, and they also share some honest, tender moments, creating a deeper connection. I found Sabine to be a solid female lead, and her struggle to let go of her human upbringing is a compelling supporting storyline. And although at first I thought that Sabine was going to be a repeat of Eve (from Burn for Me) when she didn’t want to kill the bad guys, she quickly matures and grows into a well-rounded female lead.

Ryder is equally as engaging and a strong lead in his own rights. During the previous book, Ryder came across as a selfish jerk; however, this time around when we view his actions in context and through his own perspective, his character shines. I enjoyed learning more about his history, and his journey to uncover who betrayed him to the Genesis Labs makes for an exciting plot.

Since the story overlaps with Burn for Me, the reader knows what happens to Ryder, Wyatt, and the Genesis Labs. I found that to be mostly a good thing; however, it takes the steam out of the initial escape scene because based on the events of the first book, I already knew what the end result would be. Yet, because the book moves past that time, it is able to focus on a story outside of the labs – one that I found more captivating and enjoyable. Sabine’s interactions with her father and brother are both exciting and heart-wrenching as she learns the truth of her past. The author does a good job tying in her story with Ryder’s, creating a complex puzzle that slowly reveals a larger picture.

Because he is the focus of the upcoming third book, Playing with Fire, I feel it necessary to mention Dante, another phoenix who was held at Genesis. He is very old and cannot seem to escape the natural tendencies of his race to kill off others of their kind. Therefore, he hunts Sabine, and his attempts to destroy her add an edge and auxiliary excitement to the entire book. Yet he seems to meet his match in Cassandra Armstrong, a scientist who worked inside Genesis to help the paranormals who were captured. (Their story to come…)

Overall, Once Bitten, Twice Burned is a satisfying and entertaining PNR read. The story is original and exciting, and I found the chemistry between the main couple to be sizzling. Their scenes were both sensual and moving. I really liked the twists that were tossed into the entire plot — nothing so out there, but different enough to make it a fresh story. My only real issues were at the beginning of the book: having repetitive time back at the labs and for a brief period, and thinking Sabine was going to be a repeat of Eve from the first book. But both accounts were quickly resolved, and the story became completely engrossing. I liked this one a lot and look forward to reading the next book later this year.

Ryder Duncan keeps his secrets. With a twisted scientist starving him in a 10 x 12 cell, it’s not easy to conceal the abilities that set him apart from other vampires, or his plans for escape. But survival–and revenge–are worth waiting for. Until the so-called doctor tempts his appetites with something special: a woman, with a soft Southern accent and a scent like flowers. Sabine.

Sabine Acadia didn’t volunteer to be dinner. She was kidnapped and tossed into the cage of a monster. A monster with fierce green eyes, a body that speaks of ruthless power–but a touch gentle as a caress. Ryder knows things about her, secrets Sabine needs to learn fast. Because while they might soon escape this prison, she’s fighting an urge to set all her desires free…

Reviews in the Series:
Burn for Me by Cynthia Eden (Phoenix Fire #1)