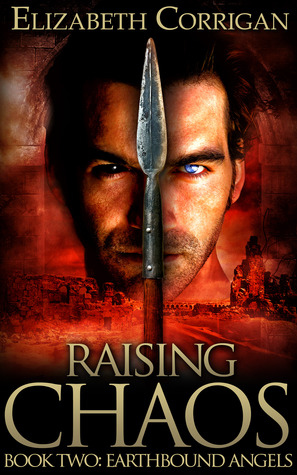 The second book of The Earthbound Angels series, Raising Chaos, was already out by the time we finished reading Oracle of Philadelphia, the first book in the series.  Since we absolutely loved the first book (it’s one of our favorite reads of 2014), we immediately purchased Raising Chaos not thinking that the publisher was sending us an ARC (oops!).  Raising Chaos has a different feel from the first book, but the world and the characters continue to fascinate and mesmerize us.

Gikany and Una love the mythology of The Earthbound Angels series.  We find out more about the different angels and demons in Raising Chaos.  The central character this time is Bedlam, the demon of chaos.  Bedlam is fascinating, and he charmed us in Oracle of Philadelphia.  For a demon, he is inherently good, but his chaotic tendencies get him into trouble.  We loved how his favorite places to visit are areas where natural disasters are occurring.  His inner monologue suits him as well.  Bedlam is easily distracted by everything.  In some ways he is like Dog from the movie Up, but much deadlier.  Bedlam’s thoughts are not always linear and can be easily jumbled, but he is utterly, utterly enthralling.  The story of him and Kenzie, his only love, is heartbreaking.  Angels can only fall in love once, and then they will always and only love that one person.  Kenzie and Bedlam love each other, but are forever separated.  The connection between Khet and Bedlam is just as compelling: two people who are separated from their heart’s desire, finding a satisfying companionship with each other.  Their platonic love is enough of a balm for their broken hearts to face the eons alone.

In Raising Chaos we follow not only Bedlam, but Khet and Siren (the angel of truth) as well.  This was a surprise to us and a small source of distraction.  In the first novel, we had only Khet’s point of view and what appeared to be the single story arc of saving Sebastian.  This time, we have multiple points of view as well as multiple plot lines running.  With it written in first person, there are moments when the point of view changes unexpectedly.  The constantly changing points of view forced us to repeatedly stop to reorient ourselves to the change before we continued on reading.  We still enjoyed the story, but did not care for the interruption in the flow of the story.  Although the major plot arc is about Bedlam’s quest to find the spear, we also get an interesting glimpse of Khet as she takes a vacation from the diner.  We learn more about Khet and why she makes such a concerted effort to keep herself apart from humans.

The story of Siren and the Grigori was interesting as well.  Through Siren’s point of view we learn more about the strange and rigid rules that bind angels and demons, along with the strange sense of “justice” when it comes to punishment of their kind.  Since Siren is the angel of truth, she cannot lie and she knows if someone is lying.  Which is pointless because no angel or demon can lie in her presence, they are compelled to speak the truth.  This allowed some hilarious moments which we thoroughly enjoyed.  Through Siren we also learned about Haven and its creation – which was just as fascinating.  We wonder if the introduction of Siren helps to lay the foundation for the next novel.

At the conclusion of Raising Chaos, we were stunned.  We absolutely loved the foreshadowing that was present from the beginning but did not notice until the end.  The mystery of Khet’s fate from Oracle of Philadelphia was nicely resolved as well.  We were left with a bit of a cliffhanger, even though the ending is satisfying and the major plot arc is resolved.  Ms. Corrigan has shown us yet again how an ending can resolve the overall story arc, but still leave a little left to tempt us for the next book. Needless to say, we are eager for the next book in The Earthbound Angels series.  If you haven’t picked it up yet, you really should.

When good fails, chaos rises to the challenge.

The daily life of a chaos demon is delightfully sinful—overindulging in Sri Lankan delicacies, trespassing on private beaches in Hawaii, and getting soused at the best angel bar on the planet. But when Bedlam learns that the archdemon Azrael has escaped from the Abyss in order to wreak vengeance against the person who sent her there—Bedlam’s best friend, Khet—he can’t sit idly by.

Only one relic possesses the power to kill Khet, who suffers immortality at Lucifer’s request: the mythical Spear of Destiny, which pierced Christ’s side at His crucifixion. Neither angel nor demon has seen the Spear in two thousand years, but Azrael claims to know its location. Bedlam has no choice but to interpret woefully outdated clues and race her to its ancient resting place.

His quest is made nearly impossible by the interference of a persnickety archivist, Keziel—his angelic ex—and a dedicated cult intent on keeping the Spear out of the wrong hands. But to Bedlam, “wrong” is just an arbitrary word, and there’s no way he’s letting Khet die without a fight.

Reviews in the Series:
Oracle of Philadelphia by Elizabeth Corrigan (Earthbound Angels #1)