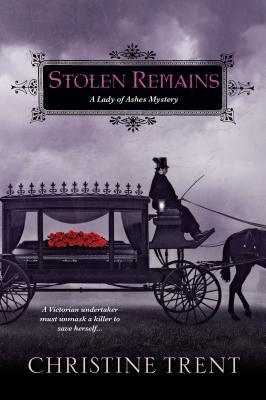 Stolen Remains is the second novel in the Lady of Ashes Mysteries.  I was wonderfully surprised to find this sequel is as engrossing and interesting as the first novel, Lady of Ashes.  Although I didn’t think I was in the mood for a historical mystery when I picked it up, I found myself completely engrossed and unable to put it down.

Violet is a wonderfully characterized heroine.  Clearly a woman who loves what she does, Violet sticks out like sore thumb in Victorian society.  Through the interactions between her and various characters, we learn about the odd role in society that undertakers have.  They are tradesman and looked down upon in some ways because of what they do, yet they make a fairly comfortable living, placing them higher in society monetarily.  It is because of their work that the deceased are given their final respects so they can rest and the family can grieve.

I sympathize with Violet’s life and the conviction she has in ensuring a loved one is fully respected and put to rest.  After the events in Lady of Ashes, I am happy with her situation in Stolen Remains.  I enjoyed her inner monologue when dealing with clients that are overcome with emotion.  She is a lovely blend of gentleness and steel with a large dash of intelligence.  For as much as she does not think of herself as a skilled detective, she is amazingly talented at collecting clues.

The mystery in Stolen Remains was quite different from what we experienced in Lady of Ashes.  This novel had a different feel, but I enjoyed the difference.  We are privy to both the Prince’s and Queen Victoria’s point-of-views (POVs), but the majority of the book is told from Violet’s perspective.  There are a few other POVs from a few minor characters, but these were mostly in the beginning and helped to set up the novel.  Despite all of the information we were given in the beginning, the revelation of the murderer and their motives completely surprised me.  For as much as Violet feels as if she is bumbling along, as I thought back over the novel, the clues were there, if you looked carefully.  Even as she came to the conclusion, I was still surprised and needed the unveiling and confession from the guilty person.

One of the best aspects of Stolen Remains is the simple way Ms. Trent immerses the reader in Victorian England.  The scenery and period are seamlessly woven into the dialogue and setting.  We are not given pages upon pages of description of rooms and furniture, but little bits here and there.  It allows me to envision myself in this time period without losing the pace or tension of the storyline.  As much as the mystery and Violet’s work can be gruesome, the setting and period eases it.  There is just something enchanting with the way we are transported into this world.

If you enjoy historical mysteries and an unconventional detective, please pick up the Lady of Ashes Mysteries.  I highly recommend you begin with Lady of Ashes, the first book.  The key players and some notable events are referenced in Stolen Remains and will, therefore, give you richer read if you have the backstory.  I hope you enjoy this series as much as I do.  I eagerly await the next novel, A Virtuous Death, due out in later this year.

After establishing her reputation as one of London’s most highly regarded undertakers, Violet Harper decided to take her practice to the wilds of the American West. But when her mother falls ill, Violet and her husband Samuel are summoned back to England, where her skills are as sought-after as ever. She’s honored to undertake the funeral of Anthony Fairmont, the Viscount Raybourn, a close friend of Queen Victoria’s who died in suspicious circumstances–but it’s difficult to perform her services when his body disappears. . . As the viscount’s undertaker, all eyes are on Violet as the Fairmonts and Scotland Yard begin the search for his earthly remains. Forced to exhume her latent talents as a sleuth to preserve her good name, Violet’s own investigation takes her from servants’ quarters, to the halls of Windsor Castle, to the tombs of ancient Egypt–and the Fairmont family’s secrets quickly begin to unravel like a mummy’s wrappings. But the closer Violet gets to the truth, the closer she gets to becoming the next missing body. . .

Wrought with both heartfelt bravery and breathtaking suspense, Stolen Remains is a captivating tale of death and deception set against the indelible backdrop of Victorian London