The Wicked We Have Done 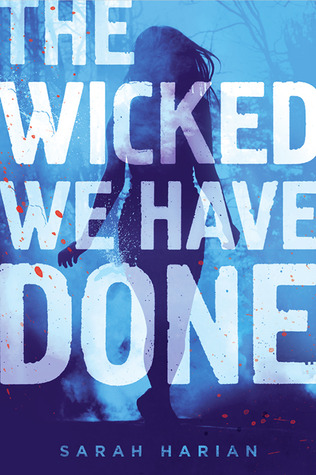 The Wicked We Have Done is the debut novel from Sarah Harian.  Gikany and Una loved this first taste of the Chaos Theory series and look forward to the next novel.

The premise reads a little like The Running Man with a twist.  Categorized as New Adult, The Wicked We Have Done is an interesting mix of a futuristic science fiction world and a coming of age romance.  The underlying issue of the novel is how this future society handles the punishment of its criminals.  This is an arduous political topic, but one that is well illustrated in this story.  Evalyn, along with several others who were convicted of the crimes of rape or murder, has decided to take her chances on a new program called the Compass Room.  If she survives the room, she will be set free having proved her innocence.  If the Compass Room finds her guilty, she will be executed for her crimes.

This futuristic look into our world is compelling.  The issue of crime and punishment is one that has been debated for decades, and has an interesting twist in this world.  We enjoyed the debate, the subtle questions of not if someone committed a crime, but what were the reasons behind it.  Are you guilty because you killed someone, or are you innocent because you killed to protect someone who was in danger?  What the Compass Room takes into account is the triggers, what caused someone to commit the acts they have been convicted of.  All these things monitored and evaluated by complex computers and scientists.  Yet, the fundamental question is: are these programs infallible?

The novel follows the point of view of Evalyn, a convicted terrorist who was convicted of masterminding a campus shooting.  But is she guilty?  We slowly find out about her crimes through the well paced used of flashbacks as Evalyn tries to survive the Compass Room.  We liked Evalyn, her inner struggle with what she did to get to the Compass Room, and her fight to survive the Compass room.  The turmoil we experienced as we debated whether she is or isn’t guilty was well played through the novel.  This suspense was heightened by the rhythm of the flashbacks as we slowly learned her role in the terrorist act and why she feels she should die in the Compass Room.  Our fingernails were nubs by the end.

As The Wicked We Have Done concluded, we are left with some unanswered questions and are interested to know what is next.  Although there was a small inconsistency in the mythology of whether Evalyn is one of the first true runs of the program or not, we found it to be mildly annoying rather than distracting.  Something we believe could be a simple error from a debut novel.  Hopefully in the sequel this small misconception will be remedied.  There is much more we could discuss, but we fear it might spoil it for you.  Suffice to say, the characters do draw you in.  It was fascinating to find ourselves rooting for people that some in society would say should lose.

Evalyn Ibarra never expected to be an accused killer and experimental prison test subject. A year ago, she was a normal college student. Now she’s been sentenced to a month in the compass room—an advanced prison obstacle course designed by the government to execute justice.

If she survives, the world will know she’s innocent.

Locked up with nine notorious and potentially psychotic criminals, Evalyn must fight the prison and dismantle her past to stay alive. But the system prized for accuracy appears to be killing at random.

She doesn’t plan on making friends.

She doesn’t plan on falling in love, either.

Purchase Info:
The Wicked We Have Done (Chaos Theory #1)

2 responses to “Review: The Wicked We Have Done by Sarah Harian”