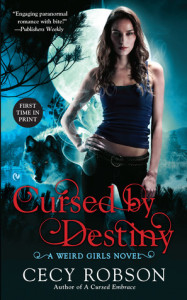 My sneakers crunched against the thickening snow in the garden, but the sudden alertness of my tigress slowed my steps.  She veered right and left, searching for a way out of me and thrilled by the sudden aroma breaking its way through the flurries.  I lifted my head to the sweeping sugar pine to my right, my lips parting at the sight of the dark figure crouching on the branches.  He leapt and landed with the controlled grace of a predator, watching me as he rose.

“You caught me,” he said quietly.  I nodded, my breath lodged deep in my lungs.  “I know I shouldn’t have come.  But I needed to be sure you were safe.”

Five vampires emerged from behind the trees, their sharp hisses forcing Aric’s deep voice to morph into a challenging growl.  They circled us, their vicious gazes fixed on Aric.  “Try it,” he rumbled.

I stepped away from Aric and faced the lead vamp.  “Go back to your posts.”

“The dog doesn’t belong on our master’s land, Celia,” he hissed, his incisors lengthening.

“He does as my guest.”  My voice remained clam.  My protruding claws revealed I’d skewer hearts like chicken if anyone laid a fang on my wolf.

“I’m not asking!”  I snapped.  “I’m ordering you to go back to you damn posts!”  Misha had bequeathed me the title of Mistress of the House of Aleksandr when I first moved in.  For the most part, his family and I ignored the so-called promotion.  I rarely pulled rank, but I did then.  Slowly the vamps withdrew, easing back into their hiding spots with audible swears and grumbles.

My breath released in a shudder only to catch when Aric’s heavy black leather jacket fell against my shoulders.  The same jacket I’d given him on his birthday so long ago.  I lowered my lids to beat back the raw emotions of our breakup.  Months had passed from that awful night and still I hurt so much.

Aric’s brown irises flared as he gathered the soft leather against my chest.  “You’re cold,” he said.

I backed away from him.  “I–I don’t understand why you’re here.”  He straightened, falling silent.  Snow fell in thickening clumps, coating his dark brown hair and plastering the ends over his thick brows.  I focused on the exhaustion creeping from his five o’clock shadow to the creases in his eyes.  The silence and tension stretched between us.  Eventually words found their way through my lips.  “Come inside.”

Aric followed me through the garden and into the guesthouse.  The lights flickered on, illuminating the green granite counter and stainless steel appliances.  I kicked off my soggy sneakers and tossed my socks into the empty hamper in the laundry room.  Without looking at him, I draped his jacket over one of the wrought-iron bar stools and flopped onto the chocolate suede couch in front of the gas fireplace.  I focused on the flames, the same flames I’d flung Barbara’s wedding invitation into.  Traces of the jab she’d sent via courier were no longer evident.  But the insult and the slap to the face lived on.  I tucked my bare legs beneath me, ignoring the throb to my injured knee, and waited while Aric kicked the snow from his heavy boots.

He sat beside me, resting his forearms over his muscular thighs.  The warmth from his body trumped the heat from the fire.  “You shouldn’t be here, Aric,” I said quietly.

Aric pushed his wet hair from his eyes, taking in my visage.  “I don’t mean to upset you, Celia.  It’s the last thing I want.  But I needed to see for myself that you weren’t harmed.”  He swallowed hard.  “It’s killing me that I can’t be around to protect you.”

“You’ll soon have a wife to protect and look after.  Don’t worry about me.”

Aric dropped his head into his large hands.  “Don’t.”

He angled his chin toward me.  “Don’t remind me of what I have to do.  If this goddamn war hadn’t broken out I never would have left you.”  He paused as the first of my tears trickled down my cheeks.  He never could stand to see me cry.  I wiped my tears irritably with my hand.  He reached for it and linked our fingers.  We both stiffened as a surge of heat spread across my body.

Instead of loosening his grasp, he squeezed my hand tighter.  The haunting pain hardening his expression seeped into his hoarse tone.  “I meant what I told you at Koda and Shayna’s wedding, sweetness.  You’re the one I want to spend my life with.”

My other hand covered the back of his.  “Do you have any idea how much it hurts me to hear your words, knowing you’ll soon spend your life with another?”  He wouldn’t answer.  I slowly slipped away from him and moved closer to the fireplace, crossing my arms over my chest.  His silence and the bitter aroma of his sadness made me think he easily sensed my pain.  Still, I continued, releasing the dam on everything I’d wanted to tell him.  “I get that a union of two purebloods guarantees a were child.  I get that your kind has been decimated and needs to reproduce in order to stop the Tribe and any other super evil that threatens our world.  I get all that, Aric – I do.  But it doesn’t comfort me when I’m alone at night without you.”  I tuned to him then.  “Nor will it comfort me the remainder of my days.  You shouldn’t be here, wolf.”

Aric rose from the couch, his jaw clenched.  “I’m forced into a corner, Celia.  My animal instincts roar to me to come out fighting, but my commitment to my pack keeps me in place.”  He lowered his head.  “I don’t sleep anymore.  And I haven’t known happiness since the day I left your arms.  I don’t expect your forgiveness nor do I deserve it for what I’ve done to you and to us.  Just know that I hurt along with you, that I suffer without you, and that I’ll love you forever.”

Aric’s thick boots marched across my small living room and into the kitchen.  He grabbed his jacket without bothering to put it on, then walked out of the house, disappearing into the darkness.

2 responses to “Sunday Snippet: Cursed by Destiny by Cecy Robson”