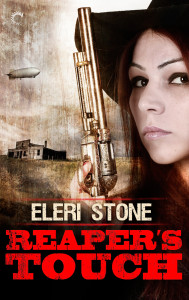 Ducking her head, she kept to the shadows.  She didn’t want to give anyone a clean shot if they came at her from the other direction.  She had no illusions that Nelson’s crew would let her go if they found her.  Not now.  It had gone too far for that.  They’d need her silence and, idiot that he was, even Nelson would recognize that there was only one way to ensure it.  When she reached the gate, a hand caught her wrist.  Before she could scream, another clamped over her mouth.

She tasted gin and salt until her attacker jerked her back and her lip split against her own teeth, filling her mouth with blood.  He was taller than she was by at least half a foot and very strong, hauling her back as if she didn’t weight a thing, every step taking  her farther away from the gate and deeper into the shadows.

She brought her arms up inside his hold and then sharply down, but she couldn’t dislodge his grip.  When she jerked forward, he moved with her, using his weight to force her off balance.  The kick she aimed at his shin barely grazed him before he turned her and pressed her face into the wall, trapping her legs between his own.  She landed an elbow to his ribs and he grunted.  A low and violent sound that chilled her to the bone.

Maybe she shouldn’t have bit his hand.

Up until that point, he’d only been trying to restrain her, but as soon as her teeth broke skin, he pulled her head back and sharply, nearly lifting her off her feet.  She bit harder but he didn’t so much as flinch, only tightened his hold until she gasped.  Swearing, he unclamped her teeth from the meaty part of his hand.  Stubble from his cheek caught in her hair as he pressed his lips to her ear.  “Be still, damn it.  I’m not going to hurt you.”

Right.  But she knew when she was overpowered, knew how to lie still and look for an opening to attack.  When she stopped fighting, he loosened his hold just enough for her to drag in a breath.

“You are hurting me.”

“Your choice to turn this ugly, not mine.  The wall won’t stop them for long.”  Even as he said it, she could hear the creak and rattle of the fence.

“Which is why I was headed for the gate,” she snapped.

“They sent men around to that side, with horses and orders to take you back to some cabin.  They’re herding you away from the inn.”

“And what?  Your conscience get to you?”

Bullshit.  “Who are you then?”

“No time for introductions, sweetheart.”  His weight lifted from him.  “Come on.  This way.”

He grabbed for her wrist but she swung away, stepping out of reach.  In the same motion, she drew her gun and pointed it at his chest.  He held up his hands to show he was unarmed but she still couldn’t see his face.  She wished she could see his face.

A huff of laughter escaped his lips.  “You’ll shoot me for trying to help you but let that mewling brat put his hands all over you?  If you want to stay here and wait for them to come through that gate, you do that.  If you want a way out, it’s this way.”

Ignoring the gun leveled at him, he turned and headed toward the house.  A sliver of light seeped from beneath the back door and her breath locked in her throat when he passed in front of it.  She recognized the lean silhouette of his body.  The creased gray hat and the way his eyes glinted when he turned his head to see if she was coming.  The cowboy from the saloon.  The dangerous, dirty, unsettling man who’d disappeared like a ghost.

There were three angry men behind her or this one man.  Dirt and danger notwithstanding, he seemed to want to help.  And she still had her pistols.

One response to “Sunday Snippet: Reaper’s Touch by Eleri Stone”