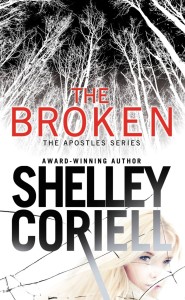 Kate looked at the gaping wound on the back of Agent Hayden Reed’s head and at the bottle of Super Glue Smokey Joe had handed her.  They sat in the cabin’s kitchen, Smokey perched on the edge of one chair, his eyes bright, Agent Reed in the other, his face expressionless.

Sweat slicked her hands, and she almost dropped the glue.  “Smokey, are you sure this stuff is safe for cuts?”

Her fingers tightened around the glue.  At age sixteen, she left home for good and swore no one would ever talk to her in that tone of voice again.  She opened her mouth but snapped it shut.  She didn’t need to be slapped with another count of assault and battery on a federal agent.  She just needed to get Special Agent Hayden Reed patched up.  Then she could run and get her Broadcaster Butcher business taken care of.

She tugged a curl of hair over the right side of her face and bent over Agent Reed’s head.  He didn’t flinch as she squirted a stream of glue along the gash and pressed together the two pieces of flesh.  Nor did he wince when she dabbed a warm washcloth at the small cut on his lip, compliments of her forehead.  He’d taken off his suit coat and wore a soft, creamy shirt of Egyptian cotton.  He smelled of laundry starch and cinnamon.

And blood.  She smelled his blood.

She grabbed the crimson-soaked cloths on the table and tossed them in the sink.  Then she picked up the glue and ground on the lid.  Through it all, Agent Reed sat stone still.  How could someone so silent say so much?

At last she turned toward him, her throat dry and tight.  She didn’t believe in coincidences.  An armed FBI agent had landed on her doorstep twenty-four hours after another Butcher slaying, this one less than three hundred miles from her home.  “What do you want?”

Her legs gave way, and she backed into the counter in an effort to keep herself upright.

He didn’t say anything but continued to look at her with that rock-hard expression.  No, there was something beyond the cold stone, something hot and molten burning in the steel gray of his eyes.

Her fingers tightened on the counter’s edge.  Was this a man she could trust?  Hell, would he even believe her?  That had been the problem before.  “And when you find her, this Katrina Erickson, what will you do?” 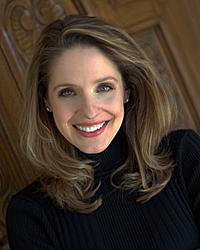 “Talk to her.”  His lips barely moved.

“About the man who attacked her three years ago.”

The kitchen was cool, but sweat coated her palms.  “What if she says she saw nothing, that the attacker was wearing a mask and dark bulky clothes?”

“I’ll ask her to try to remember anything.”  For the first time since he took a seat in Smokey’s kitchen chair, Agent Hayden Reed shifted his body.  He leaned toward her, resting his elbows on his knees and holding out his hands as if to catch something.  “I’ll take anything, the color of his eyes behind the mask, the brand of his shoes, the sound of his voice, the way he smelled.”  His voice softened, a low but steady rumble.  “Anything, Katrina, I’ll take anything.”  The rawness shocked her.  This man wanted the Butcher desperately, enough to bare his soul.

She dug her teeth into her bottom lip.  “And when you get this information, what will you do?”

His outstretched hands curled into fists.  “Hunt him down.”

Kate could see this imposing, commanding man tracking down the evil that attacked her and killed six other.  And she realized then that this FBI man in the fancy suit, great shoes, and crazy cinnamon scent would serve her purpose.  She pried her fingers off the edge of the counter and picked up a pad of paper and a pen from the LOST MY ASS IN LAS VEGAS candy dish.

“Let’s save us both a lot of time and energy,” she said.

She scribbled two lines, tore out the page, and tossed it on the table.  “Her you go.  The name and address of the man who attacked me.  Now get out of my life.”

As part of blog tour, the publisher is running a giveaway that includes a DVD set of Criminal Minds Season 1 and a prize pack of Forever and GCP suspense titles (open to US/Canada only). Details for the giveaway are included on the Rafflecopter form. Contest not run by this blog.

Shelley also is hosting a Book Birthday Bash giveaway of signed books from her favorite thriller/romantic suspense authors. The contest runs through May 11 and is open to US/Canada. Fans can enter here: Book Birthday Bash & Book Giveaway. 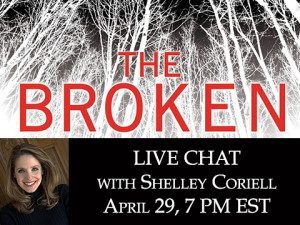 Additionally, the publisher is hosting a live Spreecast chat on April 29 at 7 PM EST to celebrate the launch of the book. Join Shelley as she talks about THE BROKEN! Click the graphic for more information.

3 responses to “Sunday Snippet & Giveaway: The Broken by Shelley Coriell”