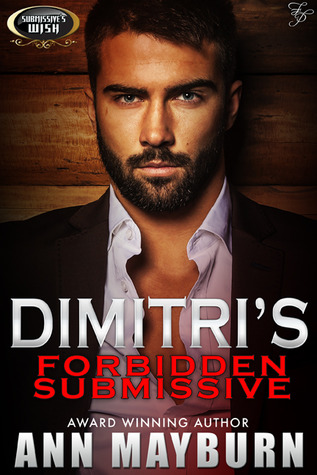 As part of the European Delegation of Dominants and their submissives visiting the US, Dimitri Novikov is enjoying his stay at their massive vacation compound. Since he is the son of the head of one of the powerful Bratvas “mafias” in Russia, Dimitri cannot afford to be in any kind of relationship because eventually, she will become a target for his powerful enemies. Yet when his friend introduces Dimitri to Rya, he is immediately attracted to her like none other before.

Rya DeLuca is the daughter of a high powered, influential member of the Ice Demons motorcycle club. Attempting to have a week where all of her fantasies come true, Rya takes part in the Submissive’s Wish Charity Auction. However, things don’t go the way she hoped, and so she is going to be extremely particular if she plays with anyone during the remainder of her vacation. When Rya lays eyes on Dimitri, she wonders if he is worthy of her attraction and time.

Dimitri’s Forbidden Submissive is the second story in the Submissive’s Wish series. It takes place in the same world, and there are cross-over characters, but the book can be read as a stand alone without any issues. The book begins shortly after the auction, which was featured in the first book, Ivan’s Captive Submissive, so there is some overlap in the timeframe from the first story.

I have mixed feelings about this story. There are some wonderful parts, and I completely enjoyed the time the couple spent getting to know one another while staying in the States. Although the pair get off to a rocky start, their mutual attraction is off the charts. I find the alternating POVs of Rya and Dimitri extremely enjoyable because it allows the reader to understand how deeply each character is affected by the other, even if they do not show those feelings externally.

The author does a great job conveying the intense sorrow Dimitri feels for his brother, Alex, at the loss of his beloved wife in a Bratva feud. I also love the brothers’ bond and closeness. In addition, Rya’s deep compassion for others – wanting to help others just because – made her a very likable character. However, I got tired of Rya’s backhanded jabs about Dimitri’s promiscuous lifestyle and calling women she doesn’t know “whores.” Rya seems like a strong, confident woman, so her continual insults came across as digging for a compliment – something a strong woman would not do.

Once the pair move to Russia, Dimitri becomes an entirely different man, one that I was not that fond of. While in the US, Dimitri was kind and loving, but once back home, his personality was too abrasive and harsh. He warned Rya (and the reader!) that things would be different in his home and in Russia, but I still didn’t really like it all. The price of protecting Rya was too costly for me, and she lost some of her sparkle and became a brat – lashing out at Dimitri and her bodyguards. He lost his loving touch. While I understand the danger Rya faced and the need to protect her, I felt that some of the punishments were beyond my enjoyment and rubbed me the wrong way. After finishing the book, it occurred to me, that possibly a big reason for this is that once the pair arrive in Russia, we do not get any more of the story told from Dimitri’s POV until almost the conclusion of the book, and I feel that the story suffers because of it. Dimitri is a hard man who cannot afford to let out his true emotions, which is why we need more story from his POV – so that we can find out the motives behind his actions.

In the end, I enjoyed Dimitri and Rya’s story. They have a powerful connection that borders on co-dependency. I really enjoyed them in their getting-to-know-you phase while in America, but once they got to Russia, Dimitri lost most of his appeal for me. However, I am deeply interested in finding out what happens next for this couple and Alex. There was a major teaser in the epilogue, and I look forward to discovering how it will all play out.

As the daughter of an outlaw biker, Rya DeLuca is used to living a wild life, but nothing could prepare her for the danger of falling in love with Dimitri Novikov. To Rya he’s a warm, loving, sexy as hell Dom who gives her exactly the kind of bondage and discipline she craves in the bedroom, but to the rest of the world Dimitri is a feared man, a cold blooded, heartless killer who is at the top of the Russian Mafia food chain.

While her hard and Dominant Master is her perfect match in every way that matters, their love can never last longer than a few days at most. Every moment Rya spends with Dimitri puts her life in jeopardy from rival gangs and Dimitri’s own family.

Dimitri will have to decide if he loves Rya enough to walk away from her in order to save her life, or if their love is worth starting a war that could change the world of the Russian mafia forever.