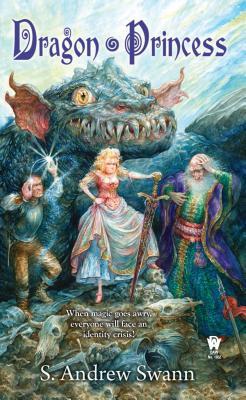 NOTE: This review contains some discussion about the ending of the book that may be considered spoilerish.

Dragon Princess appears to be a standalone novel by S. Andrew Swan.  It drew us in with its humor and irreverent situations; but left us confused by the final confrontation and the abrupt, and somewhat sad, ending.  Overall we liked it, but we hope there is more to come as we were left wanting.

The premise of Dragon Princess is what drew us in.  We were fascinated by the humor implied by the strange situation that is depicted in the book description.  Frank, our very much reluctant hero, is a thief turned dragon slayer – or so he thought.  Frank is actually a pawn in a much larger game, and his only option was to agree and hope for the best.  The best being that he didn’t die.  Unfortunately for Frank, this left him trapped in the body of the princess he was supposed to save, lost in the countryside, captured by mercenaries and still trying to avoid the evil cultists that are after him.

In many ways, Dragon Princess is the fantasy version of A Comedy of Errors.  Frank is a fish out of water as he adjusts to being in the petite and very feminine body of the Princess Lucille.

Cleaning up and relieving myself.  These were things that needed to happen if I was going to be a conscientious tenant of someone else’s body, right?  I sighed and disrobed.

And I don’t think it is possible for me to properly convey exactly how disturbing that whole process was.

There are numerous funny and embarrassing moments, although one great opportunity we thought was missed: Frank was in the body of the Princess for over a month without experiencing the shock of a monthly feminine cycle.  Frank, despite being a thief and a liar, tries to do the right thing – no matter the price he has to pay.  As much as he bumbles around, he is pretty cunning and very crafty and always funny.

Gikany and Una enjoyed the cavalry of supporting characters.  The irony of some of them was not lost on us (Sir Forsythe the Good most notably) and we enjoyed the picture they painted.  We enjoyed watching the Princess mature while in the body of the dragon, proving that it is the experiences one endures that mature the soul, not just the progression of time.  The introduction of Brock was awesome.

“The Shaman told Brock his destiny.  A princess in a far off land would be in danger.  He showed Brock visions of a dragon, and a kingdom, and a princess more lovely than anyone Brock has ever seen.”

I whispered to myself,” Brock needs to get out of the village more often.”

“Brock saw you, Your Highness.”

“Why doesn’t this surprise me?”

“Brock is here to save the princess.”

Although he is the last supporting character introduced, Brock stole the show.  Brock reminded us of Mongo from Mel Brook’s movie Blazing Saddles.  Una kept waiting to hear him say, “Brock only pawn in game of life.”  He continually surprised us and warmed our hearts. We hope to see more of him in the next (we hope) novel.

As humorous as this novel is, it has an unconventional ending.  There is no happily ever after, which may be why we are so keen on a sequel.  Our hero Frank does not get his reward for rising to the occasion and triumphing over evil.  Frank sacrifices, he sacrifices a lot and deeply.  In some ways, the ending is a tragedy in our eyes, a very dark joke.  Frank does the right thing and pays an enormous cost.  This was a twist we never saw coming and we struggled to understand it.  The abruptness of the ending did not help, which is why we sincerely hope that there is more to come in this world.

Dragon Princess is full of witty banter, comical situations, irreverent humor, and loads of twisted irony.  Even with the abrupt ending and lingering confusion from the final battle, we liked this fantasy romp.  Although, with Frank’s sacrifice and the bleak ending, we hope to see a sequel that might give Frank a bit of an improvement on his fairy tale ending.

My Rating:  B- Liked It, but we had a few small issues

Frank Blackthorne’s most recent heist did not end optimally. The sacrificial virgin survived, but the whole incident left Frank, a respectable career thief, on the run from a kingdom full of evil cultists eager to replace their sacrifice.

So, when the Court Wizard of Lendowyn, Elhared the Unwise, comes to him intending to hire someone to save Lendowyn’s princess from an evil dragon in return for riches, glory, and help with the bloodthirsty cultists problem, Frank is rightfully suspicious. Frank is also not in a position to refuse.

Perhaps unsurprisingly, Frank’s rescue fails—in an explosion of spectacularly misapplied magic. When the dust settles, all parties involved find themselves body-swapped. Frank is left stranded in the Princess Lucille’s body, halfway across the kingdom. The understandably angry Princess Lucille finds herself inhabiting the body of the dragon. In order to set things right, they will have to team up and face down thugs, slavers, elvish bookies, knights in shining armor, an evil Queen, and the hordes of the Dark Lord Nâtalc.