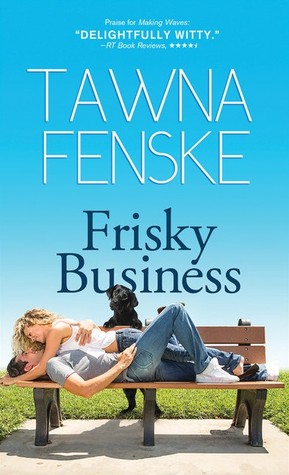 Tawna Fenske is a new author to me.  Frisky Business is her third romantic comedy, and it was well-timed because I needed a good laugh—and a few audible groans.  It’s clear that Fenske has a very naughty sense of humor.  Given the preponderance of sexual innuendos, suggestive jokes, and eye rolling puns, I can only imagine what she didn’t include.  I can picture her sitting at her computer in stitches, appearing mental to the cat on the ledge and, heaven help them, anyone walking by the open window.  Main characters Will Barclay and Marley Cartman are sharp, quick-witted, and creative.

This slightly silly, sometimes a little over-the-top, story was a sweet read.  There is a lot of teasing going on throughout the plot while Marley and Will try, but can’t seem to get together.  Great chemistry pushes at both of them hard, but something or someone always obstructs their path.  It’s probably better that way, however, because it’s strictly against company policy for boss and subordinate to date.

As Marley starts her new job handling donor relations for a wildlife sanctuary, she is undeniably attracted to the president of the board, Will Barclay. While Marley is trying to ignore him, she sets out to date “Average Joe” in the hope of finding a man less self-obsessed than the wealthy, money-focused men she’s dated to this point, especially including her ex-fiancé.  Even her own father would have her marry for money and be well kept rather than for  her own happiness.  Unfortunately, Marley’s ability to pick men is just as bad with the blue collar crowd.  I kind of wish one of these hard working men had been a more viable, less flawed potential match, increasing the tension over who she would eventually choose.

Will is not without his issues either. He’s been deceived in the worst way, but can’t escape the reminder of it either.  He just doesn’t trust any woman.  He’s been burned, and it’s easier to be alone than to risk being hurt.  Marley makes him question that position—and want to put her in several positions.  See, now I’m doing it.  When you read Frisky Business it can’t be helped—just don’t call your mother while you’re in the middle of it or something very naughty may come out of your mouth.  Maybe it does anyway.  Ok, I’m going to stop now.  Go read the book.  It’s worth your time.

She’s judging a man by the size his . . . wallet?  Marley Cartman wants a guy with a tiny one.  Bank account, that is.

When Marley takes a new job handling donor relations for a wildlife sanctuary in Central Oregon, she vows to make some changes in her personal life, too. She’s had her fill of overbearing rich guys, from her dad to her ex-fiancée to the wealthy jerks she rubs shoulders with as a professional fundraiser. From now on, she’s only dating blue-collar men with modest paychecks and a little dirt under their fingernails.

That sure as hell doesn’t describe William Barclay, the quirky board chairman who supervises Marley’s position. But Will’s not your typical millionaire, either, with his duct-taped shoes, assortment of outcast canine companions, and his habit of shaking up stuffy board meetings with quirky humor.

Will has issues of his own, namely his ex-wife and his sister. He had no idea the two women were playing clap-the-cupcakes on the side, but he’s over it now, and they’re all friends. Mostly. But he’s through with women pretending to be something they’re not, which is why Marley Cartman rubs Will the wrong way. Is she simply a people-pleasure in sharp suits, or something more scheming?

As Will and Marley butt heads over grumpy badgers and phallic artifacts, they discover they have more in common than they imagined. And sometimes, the opposite of what you think you want is exactly what you need.