The Hell or High Water series is one of those that I liked a lot from the very beginning, but I’ve since become somewhat obsessed with. Prophet and Tommy are incredible characters, both of them tortured, scarred men who’ve never held much hope for themselves, or anything else, really, until they met each other. If Long Time Gone, the previous story in the series, was about Tom dealing with his demons, then Daylight Again is Prophet’s turn.

I absolutely love Tommy and Prophet. Watching them evolve from being solitary warriors who always insisted on taking care of themselves, isolated from everyone—even those who are closest to them—into lovers who now depend on each other so completely has been a real pleasure. The way they care for one another is so intuitive and selfless that neither has to ask what the other needs. There’s a genuine sense of completion about their relationship, even though they’re still working on their respective issues. It’s the “work in progress” part of what they have, and their commitment to face whatever comes their way together, that keeps the romantic elements of Daylight Again unpredictable and pleasantly edgy.

Often, I avoid talking too much about the erotic elements of a story, in an effort to avoid redundancy and clichés, but I’m going to make an exception in this case. Prophet and Tommy together are magic. Wonderfully sexy magic. Every time they’re together is so filled with purpose and intensity that there’s no mistaking it for anything less than real devotion. Sex between these two is usually demanding and rough, and rather than using it as a means to avoid their troubles, it’s the way in which they work through them. It’s how they understand one another best when words aren’t enough. For all these reasons I loved these moments. Plus, they’re just really, really fun to read (and reread).

Although the relationship between Tommy and Prophet is the main focus of Daylight Again, the action is fairly relentless and kept me on edge for the duration of the story. Ms. Jakes doesn’t take it easy on her characters or her readers, carefully weaving one story together, only to turn the scene on its head by revealing the missing pieces at the last minute. In fact, there’s so much going on beneath the surface that wondering about what was really going on kept me delightfully nervous until the very end. Taking the final scene of Daylight Again into consideration, I don’t see that fact changing until after the next story, either.

The Hell or High Water series has become one of my all-time favorites. With each story, I’ve become more attached to not only Prophet and Tommy, but many of the other characters as well. Once again, Ms. Jakes has crafted a balanced, captivating tale that delves into the complexities and occasional darkness that make up her heroes, letting every moment of happiness they manage to take for themselves shine more brightly in contrast. I recommend this series very highly, and strongly believe that any fan of this genre will not be disappointed.

Before Prophet Drews can have a future, he must first put his past to rest.

Prophet Drews is a man on the edge, and he’s pulling Tom Boudreaux, his partner on the job and in real life, right over with him. When his old CO calls in a favor, Prophet asks Tom to join the off-the-grid rescue. But the mission raises all of Prophet’s old ghosts: CIA assassins, the terrorist Sadiq, and most importantly, John—traitor, former teammate, and Prophet’s first love.

To help bury those ghosts for good, Prophet and Tom gather the members of Prophet’s former SEAL team . . . and a spook named Cillian who’s been tailing Prophet for years. In the process, Prophet is forced to face his team’s shifting loyalties, ghosts who refuse to stay dead, and scariest of all, his own limitations.

With everyone’s lives in danger, Prophet and Tom must unravel a tangled knot of secrets, including their own. Prophet must decide how much to reveal to Tom, while Tom must decide how far he’s willing to go to help Prophet lay his ghosts to rest.

Reviews in the Series:
Catch a Ghost by S.E. Jakes (Hell or High Water #1)

SE Jakes will be giving away one $100 gift certificate to Riptide Publishing. Entries close at midnight, Eastern Time, on May 17th, and winners will be announced on May 18th. Please complete the Rafflecopter form to enter. Winner(s) chosen at random from all eligible entries. This contest is open internationally where not prohibited by law. Open to participants, 18 years or older, who are legally allowed to participate in such a contest as allowed by their local laws. All federal, state, local, and municipal laws and regulations apply. Void where prohibited. No purchase necessary. By participating in the contest, participants agree to be bound by the decisions of the contest sponsor. Prize will be delivered by the author and/or publisher. I am not responsible for items lost in the mail. By entering this giveaway, participants agree to abide by these terms.

SE Jakes writes m/m romance. She believes in happy endings and fighting for what you want in both fiction and real life. She lives in New York with her family and most days, she can be found happily writing (in bed). No really…

You can email her at authorsejakes@gmail.com

You can post on her Goodreads Group:  Ask SE Jakes

Truth be told, the best way to contact her is by email or in blog comments.  She spends most of her time writing but she loves to hear from readers! 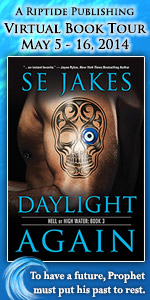 God, Prophet fucking loved a good bar fight—hadn’t had one in a while. He sent tables and chairs flying, was more cautious with actual people, but hell, anyone who came at him got a good, sharp right hook.

Ren had, of course, started the fight when Mal gave the signal that Cillian was heading toward the bar. Now, Prophet and Tom were the only ones from their group left inside the bar, and Tom ambled over to him while he waited by the dancers’ platform that was mostly unharmed. As were the dancers.

“You all right?” Tom asked.

Prophet nodded, noting that Tom looked entirely too pleased with himself. “That felt good.”

“What? I needed to release some tension.” Prophet stretched his neck. “I definitely don’t get to do that often enough.”

“There are other ways to relieve tension, Proph.”

He grabbed Tom and yanked him close, rubbing his rough-stubbled cheek against Tom’s, knowing full well Tom loved the scratch and burn. “You fought too, Cajun.”

“Self-defense, pure and simple,” he protested. “And I saw Mal and Cillian. We were clear before the fight.”

“And after. Saw Cillian leave with the majority of the crowds,” Prophet confirmed. “Where were they?”

“Closer to the back.” Tom waved a hand casually in that direction. “Shouldn’t we leave?”

“Not till we get the all clear.”

He pulled Tommy onto the dance floor, wrapping around him, burying his face in Tommy’s neck. Tom did the same as they swayed. Partly so they wouldn’t be spotted, but mainly because it was really nice to be able to hold Tom like this.

“Want to fuck you right here,” Prophet murmured. “Get on my knees, suck you. Then turn you around, hold you against the pillar and take you in front of everyone.”

“Ah, you like that idea,” Prophet shifted his glance to another couple, made sure Tom noticed they were stroking each other.

“Right,” Prophet teased. “Because we don’t have enough sex.” But really, sex with Tommy was everything. It was where and how he’d gotten the best possible education on everything Tommy—and he was well aware that Tom had gotten the same information on him. Until you really knew what someone was like in bed, you didn’t really know them at all.

“Never enough,” Tom informed him seriously. “And maybe I’d push you onto your knees. Then down on the ground. Spread you and fuck you in front of everyone.”