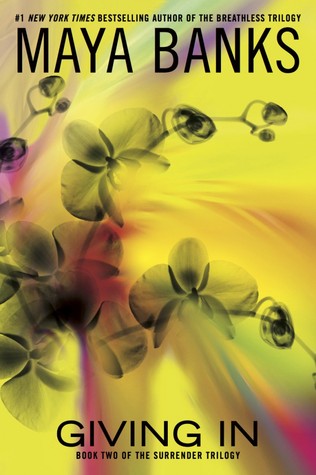 Maya Banks is always an author I enjoy reading. I look forward to her titles, and she’s pretty much an auto-read for me. What I like the most about what she’s putting out lately is that I get a whole trilogy within a year’s time. I. Get. The. WHOLE. Story. This makes me happy! Ms. Banks’s Surrender Trilogy has definitely been on my list of anticipated titles for 2014, and I can’t wait to read the final installment, due out in August.

I think what I enjoyed the most about Giving In was the growth and change in the main characters. The over-all story arc was complimentary to the previous title in the book, and I can see where the conclusion of the trilogy is heading. We saw Joss and Dash, the couple from Letting Go, the first title in the Surrender Trilogy; while their arc definitely ended with their title, we saw how achieving their HEA solidified their bond and allowed them to extend their love beyond their own little world. Chessy and Tate – the couple of focus for the last title in the series, Taking It All, had more growth in their plot arc. Which makes me chomp at the bit to get my hands on this book.

I was a bit nervous as I started to read Giving In. I strongly encourage readers to pick up the first title in the trilogy before reading this one, as there’s quite a bit of set-up contained in that book. I was nervous about how Kylie would be pushed to her limits by Jensen. I was nervous about how Jensen would relate to Kylie. I was even more nervous about how the dynamic between them would play out in the office, as Jensen was a new partner in the business her deceased brother, Carson, and Dash had formed. The business seemed to be an integral part of how Kylie defined herself, and I saw the potential for a complete train-wreck pulling out of the station as I started this book.

I shouldn’t have worried. Ms. Banks had a phenomenal plot developed surrounding these two damaged characters that had me laughing, crying, and saying OMG. The tender intimacy between these characters made me pull Mr. VampBard a little closer, and appreciate our own relationship even more.

As the story opens, there’s a huge business deal coming ‘round the bend, and Dash is leaving on his honeymoon with Joss. Sure, Jensen – I’m having you handle this huge deal that could set up the company for success. Oh, wait – I’m not going to be around, so just do it, ‘kay? While I know Jensen is completely capable of handling this on his own, I turned into a pile of girl-goo when he included Kylie. Because he believed in her. He identified that she was over-educated for her position of office manager, and had confidence that she could bring home this business deal. I mean, Jensen was attracted to Kylie immediately – it was evident in the previous title. He want to see Kylie’s confidence in herself grow – and I think it’s a wholly selfish move.

It’s no secret that Jensen is a Dominant. In business as well as in the bedroom. His commanding presence and bossy ways scare the hell out of Kylie, and she’s harboring some resentment for him because she feels he’s been brought into the business to replace her deceased brother. Yup. A whole lotta emotional baggage to sift through there. Watching Kylie evolve from the ‘scared of her own shadow’ character to a woman that knew what she wanted, and was ready to fight for it, was one of the most satisfying character development arcs I’ve read in a long time. I can see how readers will identify with Kylie, as well as how readers will cheer her on every step of her journey. They may also want to kick her tush on occasion, as well.

Jensen. Um. Wow. I have to say that he’s got me wrapped around his little finger. If Kylie’s character arc was satisfying, I’d classify Jensen’s as amazing. As I’ve mentioned, it was obvious to me that Jensen was into Kylie at the end of the previous book. True to a Dom, Jensen started off this book looking cocky and self-assured. I mean, when a guy has enough guts to stick with pursuit of a woman that has plainly shown that his presence is not required and rather unappreciated, he gets props for commitment. Who would work that hard to win favor of some girl? Especially when it’s not to win a bet or something? Now, couple that with the necessity to suppress his natural tendencies – his Dominance – around this woman he’s completely and utterly in love with. Yup. Ms. Banks went there. Jensen earned MAJOR points with me here. Because I don’t want to spoil this beautiful unraveling of events, I really can’t go any further.

Trust me when I say that Giving In is a beautiful story about two people learning to believe they are lovable after overcoming adversity on an individual level. And the last twenty percent of the book? Um. Plan to read it in one sitting. Hold on to your hat, and have the tissues ready! Maya Banks is truly a master at her craft, and I can’t wait to read the last title in the Surrender Trilogy, Taking it All.

Kylie sees the way Jensen looks at her. The dark promise in his eyes. That rough edge of dominance she knows he possesses. But dominance is the one thing that frightens her above all else. She and her brother barely survived a childhood steeped in violence and abuse. She could never give up total control and submit to a man. Especially a man like Jensen. Could she?

Jensen sees the shadows in Kylie’s eyes. Knows he has to tread very carefully or risk losing any chance he has with her. All he wants is the opportunity to show her that dominance doesn’t equal pain, bondage or discipline. That emotional surrender is the most powerful of all, and that to submit—fully to him—will fulfill the aching void in her heart in a way nothing else ever will.

Thank you to the the publisher who is giving away one (1) print copy of Giving In to one commenter. To enter to win a copy of Ms. Bank’s upcoming title, please fill out the Rafflecopter form AND leave a comment at the end of this review telling us what is your most anticipated book releasing during the remained of 2014. This contest is open to US Mailing Residents ONLY. Open to participants, 18 years or older, who are legally allowed to participate in such a contest as allowed by their local laws. All federal, state, local, and municipal laws and regulations apply. Void where prohibited. No purchase necessary. By participating in the contest, participants agree to be bound by the decisions of the contest sponsor. Prize will be delivered by the publisher. I am not responsible for items lost in the mail. By entering this giveaway, participants agree to abide by these terms.

14 responses to “Review & Giveaway: Giving In by Maya Banks”