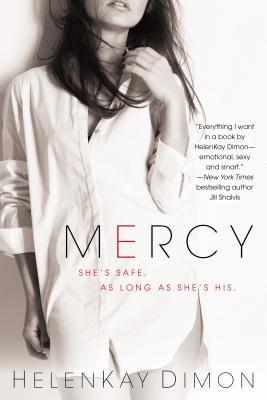 Sizzling romance and an intricate plot put HelenKay Dimon at the top of new-to-me authors for 2014. She’s on my auto buy list, and someone restrain my one-click finger, or I’ll pick up her entire backlist.

I was less than 25% done with Mercy, the first title in Ms. Dimon’s Holton Woods series, when I announced on Goodreads that **everyone** should go preorder this title. When a book is good enough to keep me up most of the night, it’s good stuff. I liked the way all the details made their way into the story, but there wasn’t an info dump. The beginning of a detailed novel oftentimes has at least a couple areas that give me important stuff I need to know to effectively read the book, and I was impressed to not find one. The action started IMMEDIATELY, and the pace was quick throughout. Every time I thought I was going to find a lull, nope. Makes it difficult for me to put down the Kindle to sleep. And eat.

The characters totally made this novel, and were crafted to exist. They were realistic, believable, and drew their first breath the minute I started reading. The five major characters that we saw in this title impressed me. I want to see more of them, and I’m really glad there will be another book before the end of the year (Only, slated for October 2014), so I get to revisit these characters.

Mercy took place, primarily, within the walls of a nightclub. Two residences were established, as well as meeting rooms and offices.

The heroine for this fabulous journey was Becca. This girl has more guts than… someone twice her size. She was the awesome kick-ass woman that doesn’t normally need someone to take care of her. I wonder if we can get a YA book about Becca. She’s a great role model for kids (especially girls!) that have overcome adversity. Becca’s also one of those characters a lot of people are able to identify with. Seems as though she’s on a super-secret CIA hit list, and they’ve got one attempt under their belt. The rest of her special ops team is also on the list. I admire Becca. When she could have headed underground and basically disappeared, she went to Jarrett, knowing he would help her. Because they had the whole trust vibe going previously, and she didn’t want to believe that it was gone. I liked her because, even though in a D/s relationship, the only place she submitted to him was during some sexual play.

Jarrett is a great character because he shows money can’t buy happiness. As a reluctant participant in parts of his own life, Jarrett is floating along with the current. He seems to be a Dominant in many aspects of his life, including his business and his romantic interests. He is, however, one of the most decent male leads I’ve read in a long time. His own damaged past has made him extremely compassionate, and that side of him shows through whether he wants it to or not. This makes him a lovable and a character able to connect to readers. And it makes me adore him. Even though Jarrett may have been previously involved in shady things, he’s now on the up-and-up. Ms. Dimon is able to infuse Jarrett’s past into the story in a seamless manner, and that makes it more accessible to readers. And I really appreciate that.

As far as best friends go, I think Wade ranks in the top five. As one of Jarrett’s besties, he’s not only a friend, but involved in pretty much every aspect of his life. Business, personal life (to an extent), and protecting his cherished friend. I loved Wade’s parallel story, and I really hope that he gets his own book, or at least a novella. I’m glad Ms. Diamon didn’t think she needed to resolve his story within the context of Mercy, because I feel that it wouldn’t have done this well-crafted, tender, and empathetic character justice.

Elijah was an interesting twist. I applaud Ms. Diamon for using this character in multiple contexts. I think he created more depth and conflict within the over-arching plot. The facets of Eli are still up for debate, and I certainly hope his story doesn’t end here.

Sebastian is the main character of the next title in the Holton Woods series, Only, due out later this year. What I loved about Bast is layered. First, that he’s called Bast. Not Seb, not Bastion. Just Bast. Second, he’s a snarky one. He provided some much-needed levity in this dark and intriguing tale. Third, Bast is a brainiac that’s been screwed over by an ex-wife. As a lawyer, I anticipate his verbal prowess, as well as being able to manipulate situations to his (and subsequently, his client’s) advantage. Lastly, I love his loyalty to Jarrett. When others might have given up on a friend, Bast stuck by Jarrett. That takes commitment and compassion. I am *really* looking forward to reading his book later this year.

To sum up Mercy, go now. To your favorite bookseller. Buy this fabulous tale of repairing broken trust, unerring loyalty, and some seriously hot sexy time. Well worth your time.

After she infiltrated his business and betrayed his trust, a disavowed CIA agent must seek sanctuary in the bedroom of a man who will either help her, kill her, or bring her to her knees…

Becca Ford is on her own. Eight months after she headed up a sting operation to take down millionaire club owner Jarrett Holt, the other agents in her special ops team have been eliminated under odd circumstances, and she needs a place to hide.

Jarrett is a man who prefers darkness to light. He deals in the only truly valuable currency—information—and his supper club caters to an exclusive clientele. It was an uncharacteristic moment of weakness when he let a woman into his life. But it’s not luck that the criminal charges disappeared . . . as did the evidence.

When Becca returns to the club seeking his help, Jarrett doesn’t want to hear her story. But he does want her body, and demands that she give it to him. He’ll keep her safe—for now—but it’ll be in his bed and on his terms, until he says they’re done.