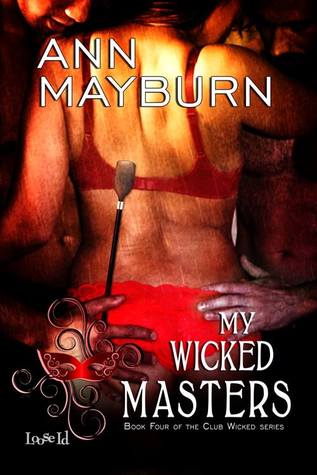 The fourth title in Ms. Mayburn’s excellent Club Wicked series focuses on a few familiar faces. Rhiannon Mirga, known at Club Wicked as Goddess, has been a server at the club for three years. She’s known by her icy demeanor and for her issues with anger management. What isn’t known by many is that Rhiannon has a horribly painful past, which keeps her locked up and afraid to open up to others.

The story also features best friends, Masters Liam and Rory, whose backstory is told in the wonderful novella, My Wicked Trainers. The pair are the best submissive trainers at Club Wicked, but they are considering a temporary break from action. The pair have been best mates for years, but their undenied mutual attraction is tearing them apart. It is only after hearing Rhiannon’s pleas for help that the pair decide to give it one more try.

Early in My Wicked Masters, we learn that Rhiannon is not all that she appears. Her lack of self-confidence and inability to trust others becomes blatantly clear to the reader, and fortunately, some of the submissives at the club. At their urging, she approached Masters Liam and Rory, and it is in this scene that we see glimpses of the woman Rhiannon is meant to be as she pleads with the pair to take her on. The entire scene is very emotional and well written. We see the difference between Rhiannon and Goddess, and so do the men. Rhiannon is a likable character, one I rarely took issue with. However, I did get frustrated with how quickly Rhiannon would become Goddess and assume the worst of Rory and Liam. It’s not that she just assumes the worst, it’s that she is so rude and mean to two men who have never given her any reason to doubt them. Her jealousy of other women was too over the top at times. I’m so glad that the men didn’t usually let her get away with her reactions.

However, it is Liam and Rory’s story that steals the show. Since we are privy to both males’ POVs, we learn early on that each as an undying attraction and love for the other. It is so heart-wrenching to see how this denial is tearing apart the best friends. It is only through their at first competitive but then mutual love for Rhiannon that each man can come to terms with his feelings for the other. My heart was continually tugged back and forth, creating a strong emotional attachment to all three characters. And it was statements like this that just killed me over and over:

“While part of him wanted to shout at Rory that they couldn’t help her until they helped themselves, he managed to choke the words back.”

There were only a couple of sticking points for that took me out of the generally fluid tempo of the story. First, I felt that Rhiannon’s conflict with a coworker, Sunny, was okay, albeit somewhat dramatic, but the final confrontation and their conciliation felt forced. While it was necessary for Rhiannon’s character to grow, I just wasn’t a big fan of that side story.

Also, I experienced some confusion towards the pinnacle point when Liam and Rory begin to tear down their walls. For almost the entire story, I understood that the blame for the friends’ division to be shared between them, both certain that the other would never want more than a friendship. But, a seemingly abrupt shift in blame, when one man takes it all upon himself, threw me for a loop, and took me out of the story for a little bit, even though it doesn’t impact the overall storyline, nor does it diminish the pair’s struggles to accept their relationship.

Overall, My Wicked Masters is a deliciously wicked treat! I thoroughly enjoyed the sexual chemistry, growing romance, and mutual acceptance each has for the others. While Rhiannon’s emotional instability was disconcerting at times, by in large, the story was filled with emotional highs and lows that created interesting characters and strong emotional bonds. The story is filled with great chemistry, amazing sex, and touching love.

Rhiannon Mirga, known as Goddess at Club Wicked, has a reputation for being a beautiful and unapproachable ice princess. But beneath her hard exterior beats the tender heart of a submissive who yearns for a Master’s love despite a nightmare past that makes it hard for her to trust anyone. For Rhiannon there are only two men that can help her overcome her fear, the club’s incredibly sexy trainers, Master Rory and Master Liam.

Unfortunately, after a long history Rory and Liam are on the verge of parting ways, driven apart by Liam’s refusal to accept Rory’s love as anything more than friendship. Despite their own issues, the men find they cannot refuse her plea for help and together they embark on a training session like no other where the Masters are the ones who learn the true meaning of love and surrender.

2 responses to “Review: My Wicked Masters by Ann Mayburn”