Today I review Part IV. Because each part was written as a specific piece within a larger framework, each piece is rated based on the quality of the work with respect to where and when it falls within the larger story, as well as my enjoyment of the story within the context of a larger tale. The rating is not based as if this part is solely a stand alone book. 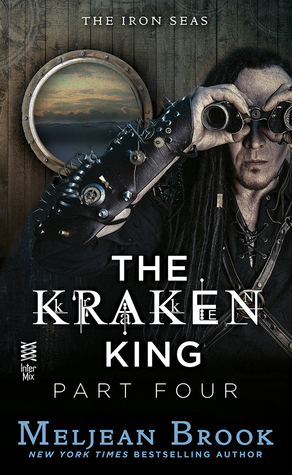 For frame of reference, this part starts with Chapter 13 of The Kraken King.

This week’s part opens with Zenobia and Helene traveling to the Red City under the protection of Ariq. During the episode, Ariq and Zenobia spend some quality time together, finally getting to know each other. The couple flirts and talks in innuendos, which is so sexy and fun.

Once again, I am enamored with Zenobia and her bold personality. And she’s so logical. She wants to kiss Ariq again, so she informs him that it is his turn to kiss her, but she tells him so that she doesn’t have to wait. The pair have a natural banter which is hilarious.

While The Kraken King and the Inevitable Abduction is by far the shortest Part in the serial, it is packed full of emotional significance, and truly is a turning point for both the storyline and Zenobia and Ariq’s relationship. The entire truth of who Zenobia is and all that has happened between the pair comes to light. It’s almost comical at points because Ariq still isn’t entirely clear on who the writer Zenobia is, but mostly, there are tender moments between the couple.

However, as the title of this part suggests, there is the inevitable abduction. Zenobia and Ariq are taken captive, and we learn more about the reasons for and who is behind the marauder attacks. This is probably the one time to date that I felt a little confused and lost in the politics of The Kraken King. However, the author was kind enough to answer some questions for me, and upon rereading, I’ve got it all straight, I hope!

I want to point out one of my favorite scenes… a perfect example of why I simply adore Zenobia and Ariq… Even trapped by two very powerful men, Zenobia cannot stop observing and taking notes. She attempts to take notes with her fingernails scratching into her arm. Ariq immediately recognizes what she is doing, and rather that scolding or shaming her, he demands that she be given her notebook. He understands and admires her. I totally teared up during that part – don’t you agree it’s such a beautiful statement of love?!

Overall Part IV was a good one. I loved the deepening bond between Zenobia and Ariq, and that the entire truth came out. I was a little confused on the political reasons behind the abduction, and I wasn’t on the edge of my seat as much this time around. And while the overall tone was more serious, it fits this middle part of the book as a whole. I am still really loving The Kraken King, with the mood and tempo spot on for where we are in the overall story.

The Kraken King has declared that Zenobia Fox is under his protection—and with her identity revealed, she needs that protection more than ever. But it comes with a price when Ariq demands that Zenobia reveal her secrets in return.

Ariq wants nothing more than for Zenobia to trust him, and he knows exactly which sensual tricks will breach her defenses. But although she urgently desires the powerful governor, Zenobia isn’t a woman who will be easily won with a few passionate kisses.

When his ambush goes awry, Ariq discovers just how deeply he can hurt her—but the real danger to Zenobia is one that he never expected…