Today I review Part VII. Because each part was written as a specific piece within a larger framework, each piece is rated based on the quality of the work with respect to where and when it falls within the larger story, as well as my enjoyment of the story within the context of a larger tale. The rating is not based as if this part is solely a stand alone book. 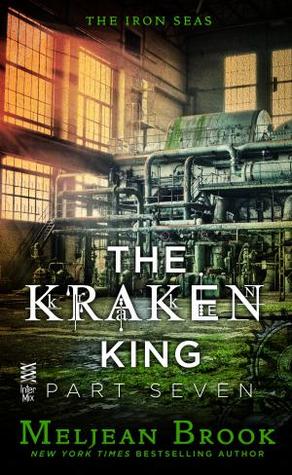 For frame of reference, this part starts with Chapter 25 of The Kraken King.

This week’s part opens with Zenobia’s insightful letter about life and love and how giving of ones self to another is a frightful yet exciting thing. She’s grown so much in the short time since the story began, and I appreciate her words of wisdom, and how frightening it is for her to truthfully share with another what is in her heart.

The Kraken King and the Empress’s Eyes begins with Zenobia beyond frustrated with her current work in progress, and she is ready to start over. Realizing that she has experienced so much life since her journey began, her stories just don’t cut it. However, while Ariq is away from the quarantine tower on his diplomatic efforts, Lady Nagamochi, the captain of the empress’s guard, visits the tower and adds another one of the clockwork figures known as “the empress’s eyes” to the quarters shared by Zenobia and Ariq. And so begins the final parts of The Kraken King.

Since The Kraken King and the Empress’s Eyes is the seventh part of the overall story and begins the journey to the final climatic scenes, it is difficult to go into much detail about the plotlines without giving away major spoilers. With that said, I want to express how perfect this entire part is within the context of the larger story. The part begins slowly, coming off of some rather big changes for Ariq and Zenobia, and builds to an undeniably powerful concluding scene. And although we are nearly to the end of the book, the part still adds original and interesting insights to the already amazing world. In addition, there are both exciting and horrifying new gadgets and tools introduced in Part VII.

The Kraken King and the Empress’s Eyes is the longest of the eight parts at over 5,500 words more than any other, and it is evident! The story is rich in detail and plot development, taking time to explore every moment with picture-perfect clarity, yet it is never overdone. In addition, the concluding scenes are wrought with suspense, creating so much apprehension that I was unable to put down my Kindle. And be warned… Part VII ends in a little bit of a cliffhanger – so you just may want to wait to have Part VIII ready to go before you start the current one!

While the story itself is amazing and developing beyond anything I could hope for, what makes The Kraken King utterly sublime is the fantastic emotional scenes. I still get tears in my eyes thinking about all that occurs between Ariq and Zenobia. The pair experience ultimate highs and painful lows as they continue to break down walls and grasp to define their evolving relationship. The inter-personal moments are some of the best I have ever read.

Just when I didn’t think that Ms. Brook could pull me in any deeper – she does. I am utterly and completely blown away. The Kraken King and the Empress’s Eyes is so beyond emotionally satisfying, beyond suspenseful and tension-filled; it is perfection. (Other than the ending, which left my heart pounding and desperate to start the final part.) Part VII is the culmination of everything that came before it: every word, every look, every emotion… they all build and explode. The emotions are so powerful that they provoked true tears from my eyes. The suspense so gripping that my heart was pounding in reaction. Part VII brings it all together and has me poised to go careening into the ending; needing an answer, and praying for the best possible outcome.

In the imperial city, nothing escapes the attention of the empress’s spies. After a visit from an old friend rekindles her every fear, Zenobia must decide whether to trust Ariq with her heart—and the Kraken King must decide whether he can ever let her go.

But when danger invades their lovers’ sanctuary, Ariq and Zenobia will have to put aside their troubled emotions. Outwitting their enemies and the Empress will be no easy feat. Luckily, they have a few allies waiting in the wings…

Be sure to check out author Meljean Brook’s post on the “Lost History of the Iron Seas” and enter to win your choice of one of the Iron Seas books. Contest open until June 6, 2014 at 12:00 midnight EDT.