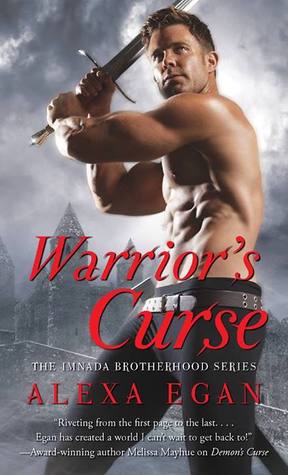 Warrior’s Curse is the third book in the Imnada Brotherhood series.  It is a rich paranormal story set within a historical novel.  I jumped into this book without reading the previous two titles, and it did affect my enjoyment.  Although I found myself liking the story of Gray and Meeryn, I do wish I had read the previous titles.

It is always best to start a series from the beginning however, when I signed up for this one, I somehow missed that it was the third in a series.  I have found that jumping in on the second book is not terrible.  World-building takes place typically (heavily) in the first and second books.  By the third book, the author assumes you have the gist of it.  Sadly, I did not and could feel the holes in the narrative.  Although I caught up, it was an uphill battle.  I also wish the index of terms had been at the beginning rather than the end.  I did not notice it until the end and it would have been a serious aid in reading.  Even without all of the backstory, I was sucked in.  I liked the different races involved and the secrecy all woven into this historical period.

The story centers on Gray who is working to end the curse from which he and two of his friends suffer.  The camaraderie between the friends was not as strong for me since I sensed that I was missing some important background regarding Mac and David and their connection to Gray.  Their stories are the previous two novels, respectively.  We also have a very fascinating character in Lucian.  I was utterly entranced by him and wanted more of his tragic story.  Gray’s commitment to ending his curse and finding peace for his race is admirable.  The turmoil between him and his grandfather was heartbreaking.  But what had me hooked was his draw to Meeryn, their history, and his desire to keep her safe.

Meeryn was a wonderful character.  I loved her inner monologue.  How lost she feels in a position she thinks she is not qualified for.  Yet, watching her become that which the Jai Idrish, the sacred crystal of the Imnada, knew she could be was inspiring.  The chemistry between her and Gray was off the charts.  The dance they lead each other on was frustrating, heart wrenching, and beautiful.  I shed happy tears at the end.

Although the couple has their HEA, we are still left with questions at the conclusion of Warrior’s Curse.  I enjoyed the world enough that I want to go back and read the first two books so I can be prepared for the fourth book in the Imnada Brotherhood series.  If you enjoy historical paranormal romance, you might want to give this series a try.

Despite being cast out of his clan, Gray de Coursy has been summoned to his estranged grandfather’s deathbed. A perfect opportunity to steal Jai Idrish, the Imnada’s most sacred relic and his last hope for breaking the fiendish spell imprisoning him.

Chosen as the Imnada clans’ next high shaman, Alys Swynford’s very soul has become inextricably bound to Jai Idrish—a crystal sphere that dates to the very origins of the Imnada. So when she catches Gray stealing it, he is left with only one choice—keep shaman and sphere together as the pair travel to The Gateway, the door between this world and the one the Imnada left behind aeons ago. For only there can the curse be lifted and Gray freed.

But conspirators among the Imnada have already opened the door to the shape-shifters’ ancient and deadly enemy. Now it will take the strength of the warrior and the power of the shaman to stop this otherworldly executioner—before it’s too late.