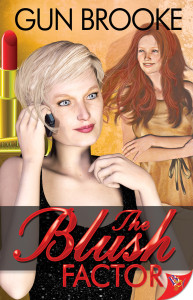 Something about this young woman made it impossible for Eleanor to merely close her laptop and stop watching.  Eleanor noticed the nearly transparent hazel eyes immediately.  A charming band of freckles danced across her nose, which, together with her full, soft, pink mouth, gave her an aura of innocence.  Her blinding smile, wide and guilelessly open, pulled Eleanor in.  She called herself “Blush”, and this girl seemed to know everything about makeup, hair, and skin products – anything related to beauty.  Blush acted so natural in front of the camera, whether at her vanity or in any other room in her home.  Her voice was melodious and her laughter contagious.

Eleanor had found this woman’s channel on YouTube while searching for the beauty gurus that had the most subscribers.  With more than 350,000 subscribers and millions upon millions of hits on her more than five hundred clips, Blush was among the most successful.  Young girls and women couldn’t seem to get enough of her advice, her reviews, or her tutorials.  Eleanor snorted.  She was no different.  This was the third evening in a row she’d sat for hours, thinking she would click on just one more link, watch one more clip of this fresh-faced young woman.  So she did, like an addict.

Blush’s intro played and her now-familiar face came into view.  Her hair in a ponytail and with no makeup on, she seemed to be wearing only a bathrobe, which made Eleanor swallow twice.  Frowning, she tried to focus on what Blush was saying.

“Hello, you wonderful people,” Blush said, waving.  “It’s been a whole week, I know, and I’m sorry.  Real life entered and I had to…deal with stuff.”  A shadow flickered across her features but was gone so fast Eleanor knew she would be replaying the clip later to see if she’d imagined it.

“Today I thought I’d show you how you can look better for less.  I know we all love the expensive brands, but hey, most of us can’t afford them.  I can’t, normally.  Some of the high-end brands send me samples and new products to test, but you know my rule: if I didn’t buy it, it’s not going on my channel.  I usually end up giving those items away to charity.  The sealed ones, that is.”  She shrugged, a funny little jerking movement of her left shoulder.  “I built this channel by earning your trust, guys, and I’m not going to ruin that by being greedy.  So, here’s my idea for a nice look for work that can easily morph into a nighttime look if you don’t have time to go home and change.”

Blush expertly put on a neutral makeup, using brands Eleanor had never heard of, as she didn’t buy her makeup at the pharmacy or the local grocery store.  No matter what she used, Blush looked stunning.  She chatted about everything and anything while she applied her makeup, giggling when she made a mistake with the liquid eyeliner, but then turned that into a lesson in itself, showing how to remove and reapply.

Once she was done, Blush leaned closer to the camera, turning her head every which way to show off the result.  “There, you see?  Isn’t that color gorgeous?  Remember, this goes with most eye colors, especially green and brown, of course, but anyone can rock this look.”  Smiling broadly, she suddenly looked off camera.  “Yes.  I’m recording.  Yes, I’ll be done soon.  Go back to bed, honey.”

Eleanor sat up, frowning.  Was that a husband?  A boyfriend?

“Sorry, guys.  My sister needs my help, so I’d better wrap this up.  I’ll be uploading a new clip tomorrow that I shot today when I got some new things in the mail.  I know you love those haul videos.”  She smiled broadly and there it was again, that shadow that slipped across her features without warning.  “If you have questions or want to request videos, you can write me via the YouTube messaging service.  If you have a professional issue or questions, feel free to use my business email below.  Night-night!”  Blush waved again, and the screen went black for a second before the YouTube default setting appeared.

Eleanor had a lot to think about.  She copied Blush’s email address into her contact, knowing she needed to approach this young woman.  Inheriting an old makeup company that had been waning for almost thirty years, mismanaged by none other than her father, Eleanor needed an innovative approach to turning around its fortunes.  Social media had been a revelation, and she’d joined Facebook, Twitter, Tumblr, and YouTube using a pseudonym.  Now that she was about to contact Blush, she’d have one of her assistants use the company email.  In the meantime, she’d keep researching what young women, and men, for that matter, thought of modern beauty products.

She finally closed her laptop, rose from the large armchair by the window, and padded over to her bed.  It was way past midnight, and she had several meetings lined up before lunch the next day.  As she climbed into the king-size bed and settled against the down pillows, she closed her eyes, completely exhausted.  Even so, hazel eyes and a smiling pink mouth appeared in her mind.  The perfect complexion, the quick, tapered fingertips that applied makeup with sure strokes, and the voice…

Eleanor huffed impatiently and rolled on to her side.  “I need sleep.”  The laughing young woman only nodded at her in her mind and stuck her tongue out to the side as she painted a perfectly winged eyeliner.  “Oh, God.  I must be going mad.”  Eleanor tugged yet another down pillow close and gave in to whatever her mind was set on displaying.  She knew better than to fight it.  Sleep would come eventually.