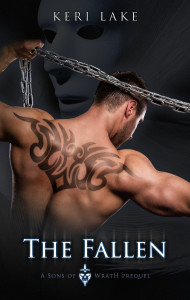 Karinna tugged at his grip, as Xander guided her up a winding staircase and came to a stop in front of a dark wooden door, with deep black grooves, that gave off an ominous warning of bad things on the other side.

He pushed it open.

Awe and horror battled inside her head as she looked around the room.  Unlike the relatively normal decor on the first floor, it did look like something out of the serial killer’s edition of Better Homes & Gardens.

Beautiful enough to have her admiring the color scheme.

Terrifying enough to leave her contemplating the quickest exit.

A large steel cross stood atop a thick brown rug, in the center of the room.  Chains hung from the ceiling.  Paddles and whips of varying size and shape dangled from the wall.  A gun safe, in the same shades of beige and brown, stood off to the side, holding God knew what, considering the rest of the interior design.

A dungeon that would bring the most sadistic Dom to his knees in tearful appreciation.

Guiding her inside the room, Xander kept his eyes on her, as though assessing her reaction.  After tossing Karinna onto the bed, he crossed the room to the ominous-looking safe and rifled through its contents.

Bolt.  Run.  The door had been left open.  A straight shot.  He could be quick, but she’d always been a sprinter.  Her tongue thickened, mouth drying as visuals of  Texas Chainsaw Massacre passed through her mind.  Jesus.  What if she picked the wrong door?  Would this leather-face doppelganger fly out, swinging?

She had no intentions of finding out what lovely little devices he kept inside that safe, either.  Before she could talk herself out of it, she jumped up and made a dead run for the door.

Yeah, she wanted in.  Wanted to find the sick sons of bitches who’d hurt her sister.  Being tortured and raped had crossed her mind, though the reality of it smacking her in the face didn’t exactly lead her down the path to acceptance.  Being alone with a psychopath out in the middle of nowhere never once played into the many ways she’d contemplated getting in the club, for sure.

Shame on her for not having a game-plan for that shit, but c’est la vie, as the saying went, no sense beating herself up over it.

The steady thud of his boots disappeared to frightening silence.

She glanced over her shoulder, fear strangling her breaths at the long, dark and empty hallway.

A wall of muscle smashed her cheek and knocked her back a step.  Out of instinct, Karinna hammered his throat and punched his face, throwing his head to the side.

Arms gripped around her waist, and he hefted her over his shoulder, as he’d done back at the club.  Karinna screamed.  As long and as loud as she could, she screamed until the rasp stole her voice.

Now she’d done it.  Pissed him off.