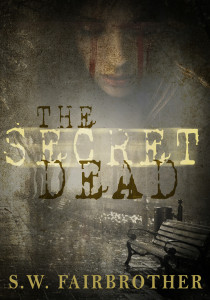 London is built on the bones of its dead.  They are everywhere, sunk into the depths and ground soil of the city.  In the Square Mile you can hardly walk more than a few paces without stepping on someone’s grave.  Most are long forgotten and long buried, and they are the reason London is filled with ghosts.  The spirits of the dead can only set foot on hallowed ground; someone must have died or been buried there, and there must have been a prayer said for the dead.  The city is spotted with it, and the spirits jump through like holy hopscotch.

Ghosts are common as rats throughout the city and about as popular.  They’re also terrible gossips.  You don’t have much else to do if you’re dead.  If I was lucky, all I needed to do was find some ghosts and put out the word, with appropriate reward, that I was looking for a zombie.

I buttoned up my coat against the freezing air and pulled my woolly bobble hat down over my ears before I left the lobby.  A single army truck was parked on the corner, but there were no soldiers in sight.  A pair of elderly women scuttled across a pedestrian crossing further up the road.  Them.  They’re going to be first to go… That’s what Little had said.  Them and me, it seemed.  But I wasn’t planning on being out more than a few minutes, and Malcolm had only been gone a few hours.  I was at a bigger risk of a fine.  I checked again for the army, but saw no one official.

Rain drizzled down the back of my neck, and the small amount of morning sunlight had diminished even further, leaving a morning dark enough that you’d need a lamp to read your newspaper outside.

Two roads up from the office, sandwiched between a pound shop and a bookie’s, is the city’s worst chippy.  The food is reasonable, but the building stands on one of the largest forgotten plague pits south of the river.  It’s changed hands numerous times over the years, suffering from the aura that accompanies so many painful deaths and puts people off eating anything it produces.  Shafiq, the current owner, has kept it going longer than most through sheer stubbornness.  I looked both ways before crossing the street.  The glass doors were locked.  I tapped until he scurried over and flipped the latch.  I slipped inside before someone could spot me and send me home.

‘Bloody lockdown,’ he said.  ‘These things cost me a fortune.  And I have to throw away a ton of food.’

It was probably a little early in the morning for fast food, but it would be rude of me to use the premises without buying anything, and I’d been up at least four hours earlier than I’d planned.  That made it effectively lunch time.  I listened to Shafiq complain while he scooped hot squashy chips into Styrofoam containers then added generous lashings of vinegar and salt.

I sat on the table closest to the wall, food stacked in a plastic bag at my side.  Shafiq was gentlemanly enough to pretend he had something to do at the back of the shop.

I squeezed my eyes shut then opened them again, and the place was full of ghosts.  Only one was a plague victim, naked and filthy, with black buboes hanging from her armpits and thighs in haemorrhoid-like clusters.  She was a regular and the reason I wasn’t tucking in to the chips already.  I didn’t get her.  I knew what ghosts were: dead souls who hadn’t transferred from the living world to the dead one, but I’d never been able to figure out why someone would want to spend their afterlife as a plague victim instead of going on to whatever came next.

The rest of the room looked like a casting call for a BBC History of Britain production.  I even spotted what looked like a Roman matriarch at the back of the room.  Ghosts that old are rare.  They tend to get bored after a few hundred years and move on.  I was impressed.  Whoever she was, she had staying power.

I rapped on the table with my knuckles and took care to make eye contact with each of the spirits in turn so they could be sure I was talking to them and wasn’t just some random crazy off the street.

They looked at me with interest.  A few I recognised, but the majority were strangers.

‘What’s in it for us?’  This from a middle-aged man about forty years dead, judging by his suit.

‘You get to pick Saturday’s movies at the Graveyard Theatre.’  The theatre was built in West Norwood cemetery in the seventies by a sympathetic medium.  It does nothing but play movies on a loop.  The ghost man looked interested.

The ghosts looked at one another, and one by one they disappeared.  My little spook army.