One of the most common questions I’m asked—that maybe any published author is asked—is “how long did it take you to write that?” When I say to people “I wrote Firebird Alex in ten months,” people often think I spent ten months typing out the novel. In fact the actual transcribing of the novel was not much of the process. I’ll break it down below so you can see what I mean.

Every novel begins with an idea. I was thinking about who Alex was; what makes her special, why she would be an interesting protagonist. When I decided she would be half “demon” that lead to me doing a lot of research into demonology, ancient mythology, and other things, so that I could build an entire alternate universe, and create an entire mythology for my “world” that was unique. That took probably a couple of months.

Next I worked on the story. I find that plotting out a novel works best for me. I don’t write a classic outline, what I come up with is really more of a “treatment”—a sort of 15-30 page story guide. At this stage, there is usually more research required: research into locations, into occupations, into procedures, and so on. For example, Firebird Alex involves missing persons cases, and computer crime. Even though my book isn’t a procedural, I wanted to be sure that when Alex described what she was witnessing, it made sense.  This also took a couple of months.

Armed with 20 or so pages to guide me, it was time to sit down and write the first draft. I spent four 3-day weekends writing non-stop, 14-hour days. I wrote 22,000 words each weekend. So you could say that I wrote the first draft (88,000 words) in about 8 weeks, as the weekends were over two months. 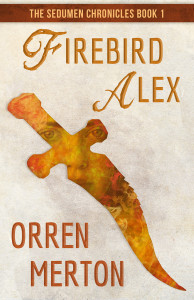 So I let the first draft sit for a while, then revised it to the second draft, which is basically the first “real” version of what I think the novel should be. Then I sent it out for a development edit, which is when an editor looks at it, and helps me really hone the content. I then write the third draft from her comments, and send that to a few trusted “beta readers” for their input. I put their input into the fourth, or “rough draft” of the final, which goes to a professional proofreader, and from there, I end up with the fifth or final draft. All those stages took about four months.

So for ten months, I was “writing” Firebird Alex, with all of my efforts going into what eventually became the novel before you. Hopefully after you read it, you’ll feel it was time well spent—I know I do!

Alex knows she’s different; other girls don’t burst into flames when they get angry. After she nearly burned the house down when she was twelve, her mother confessed that her father was a demon.

Now eighteen and mourning the death of her mother, Alex sinks inside herself until she discovers a dagger that can open a portal into her father’s realm. Although she yearns to meet her father, nothing terrifies her more. When an unknown threat from across the portal menaces her friends and her loved ones, Alex knows she must act.

Alex will do anything to save her friends—even risk appealing to her father. She knows that to face a tormentor from across the portal, she’ll need to learn to fight fire with fire.