How to School Your Scoundrel 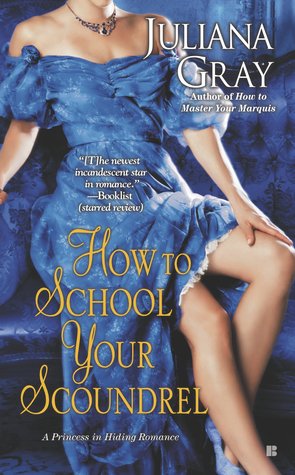 First let me start by saying as a rule I really enjoy Juliana Gray’s books. She writes fun, engaging characters with strong story lines that draw you in immediately and keep you turning the pages until the end of the novel. That, however was not the case in How to School Your Scoundrel, at least not for me. I have been waiting for this book since I started the A Princess in Hiding Series. I was excited to finally have all the pieces put together and really get to know Louisa. Would she be as feisty as her sisters? Would we finally find out out who killed the king and why? So many questions, and although a few were answered, overall I felt like the entire point of this book was to tie the first three books of the Affairs by Moonlight series together with this series.

Having read all six of these books, I knew there was a connection, and reading about how all the characters were connected was interesting. However, it should have been an interesting secondary plot that if you were familiar with the story lines you understood, but if you weren’t, no biggie. Instead I felt like it became the main storyline with Olympia as the puppet master, and it was all about him fixing his mistakes and controlling the characters in the book. BLECK!! who’s got time for that? These are thinking, mostly rational adults, and although they might need some help figuring out that revenge is no way to live, watching them be completely manipulated left me irritated at the very least and completely angry in some places. This was suppose to be Louisa’s story and Philips’s redemption. Yes Philip does find his redemption eventually, but it isn’t the self realization or the journey that you expect from Ms. Gray. Instead it is forced upon him by the very man who backed him into a corner in the first place.

And pour Louisa I feel like she is a left in the wings until the very end when Ms. Gray FINALLY fix all the issues with her kingdom. We never really get to know her, see her personality, understand what drives her. She is a strong German princess you’re tell me she has no spunk? no fight? I know it is there we get glimpses I just would have liked to have seen more of it. Instead we only really see her decorum and control. yes I know every good ruler has to have these things in spades, but they also have to passion, emotion, and know when to tell people off, none of which Louisa ever really showed me.

Overall I’d give the book a solid C. It was passable, and if you’ve read the other books in the series, you’ll want to finish it out but if you’re not invested in the story line I’d skip this one and wait for her next book. Or read Ms. Gray’s Affairs by Moonlight series instead. I think they’re more fun and better written than this one.

I’m just really hoping this was a glitch, and the next book Ms. Gray pens will be back up to her normal standards.

Princess Luisa has devoted her life to duty, quietly preparing to succeed her father as ruler. Nothing, however, primed her to live on the run, disguised as a personal secretary to a notorious English scoundrel. The earl is just the man to help her reclaim her throne, but Luisa is drawn to her powerful employer in ways she never imagined…

Philip, Earl of Somerton, has spent six years married to a woman in love with another man—he refuses to become a fool due to imprudent emotions ever again. Only, as his carefully laid plans for vengeance falter, fate hands him hope for redemption in the form of a beautiful and determined young princess who draws him into a risky game of secrets, seduction, and betrayal. And while his cunning may be enough to save her life, nothing can save him from losing his heart…

Purchase Info:
How to School Your Scoundrel (A Princess in Hiding #3)

One response to “How to School Your Scoundrel by Juliana Gray”