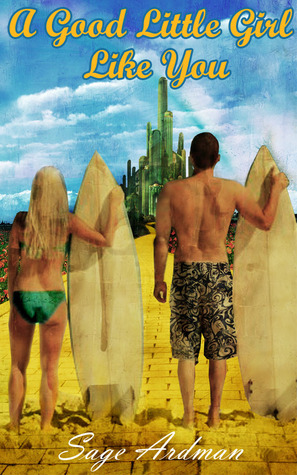 I’m the first person to jump on a Wizard of Oz-themed book. For real. There’s nothing better than transporting back to the yearly viewing of Judy Garland’s Dorothy from my childhood. I even read the book series when I was a kid. Now, I’m intensely into anything Wicked. The soundtrack from the musical is constantly looping on my computer, and I’m pretty sure my kids know all the songs by heart because I’ve forced it upon them. I’ve read the book, and I’ve seen the musical. We’re not going to talk about how I have this unrequited love for Idina Menzel and Elphaba, though.

I thought I’d totally love this book. I was set-up for success with this one. Really. Oz? Yeah. I’m there. And I usually love anything associated. You don’t want to see me in Target when I find red, sparkly shoes.

A Good Little Girl Like You, the second title in Sage Ardman’s Westerleys series was kind-of meh for me. I adored the Oz references. I loved the fact that the H/h came together and forged a relationship because of their mutual love of Oz. I even was okay with the conflict, although the way it went down rubbed me the wrong way – which I’m okay with, as long as there’s a seriously good reason, and by the end it was evident there was.

This would be a good book for someone that’s not an erotica reader, or is specifically looking for a light title to read. I’m rarely that reader. The sexy-time scenes launched me in to euphemism hell. References such as:

“…and the head down below in her preheated oven.”

were a bit cheesy for me. Although, they DID make me laugh-out-loud.

Ms. Ardman did a fabulous job with the hiding-my-riches-so-you-don’t-love-me-for-my-money trope. I liked the added spin of ‘the bet’ with Rebecca’s best friend. The stakes were awesome. I even liked the ending, where O.E. basically told his life story. I never connected with him until the end. And, I wanted to shake Rebecca when she missed obvious clues that O.E. had money, as well as when she wasn’t trusting her instincts.

The cheese factor kind-of got to me after a while. Everything had a hidden Oz meaning. And, for aficionados of the book/film, they were obvious. This isn’t necessarily a bad thing, though. Readers that love Oz and are ready for a light read should definitely pick up this title. Even though it was the second in the series, I didn’t feel lost. Although, I’m certainly curious as to whether Ms. Ardman themes her titles in this series.

The relationship building was cute, and done well. I enjoyed watching Bec & O.E. get to know one another. The way they grew as a couple, and knowing that O.E. was evasive totally irritated me. But, it’s part of the plot arc and totally necessary. I’ve never been in to hiding a huge part of one’s self when beginning a relationship, and that’s probably why I didn’t connect with this title.

Well-written with adequately developed characters, Ms. Ardman takes Oz, a place where dreams come true, and launches two characters into a whirlwind romance. When the dust settles, it’s easy to see that Bec and O.E. have more in common than just their love for this fictional world.

What do you get when you combine a surfing billionaire, a globe-trotting businesswoman, and The Wizard of Oz?

O.E. Orton has a very large bank account and an even larger ego. Ever since he struck it rich, there’s nothing he can’t have, including a California beach house where he goes to surf. One night at a party, he makes an unusual wager that involves his pride, his money, his finesse with women, and surfing. He’ll be sorry.

Rebecca Moore specializes in international negotiations. She flies all over the world for her work and speaks many languages. But regardless of her language skills, she’s going to have a hard time communicating with O.E. Orton.

And what about The Wizard of Oz? Does it play an important part in their budding romance? Do they walk on the Yellow Brick Road and visit the Emerald City? Do we meet Dorothy, the Wizard, the Witch, and even Toto? Yes!