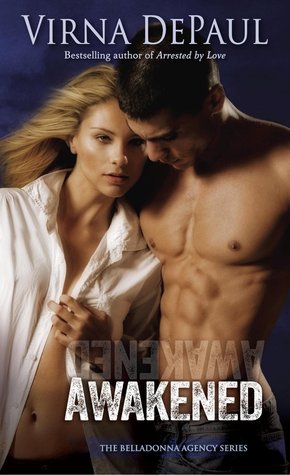 Barrett Miles is a human working for the Belladonna Agency, a secret section of the FBI that knows about vampires, which exist among the humans. Barrett is desperate to locate Jane Small, a missing teen who is the daughter of Barrett’s deceased childhood friend. Jane was taken by sex traffickers that cater to vampires.

Nick Maltese is a gun-for-hire, contracted by the FBI; his job is to eliminate dangerous, rogue vampires. Believing that the FBI’s Turning Program is over and it is his job to clean up the failed mess, Nick is surprised when his former comrade and lover, Barrett, shows up telling him about Jane and her captors. Now the pair must work together to bring down the dangerous vampires holding Jane captive while coming to terms with their unfinished relationship.

Awakened, the second story in the Belladonna Agency series, is much tighter and more focused than its predecessor, Turned. I appreciate that there was far less world-building and background about vampires, the FBI’s involvement in turning agents into vampires, and the dozen or so characters who play background rolls. Instead, the story opens right in the thick of Barrett trying to locate Jane and stays the course throughout the entire novel. And although human trafficking is a horrendous topic which should never be trivialized or taken lightly, Ms. DePaul is able to effectively use it as the backdrop for her story without bringing readers into a graphic or gruesome set of circumstances.

The primary storyline of finding Jane and bringing down the sex-ring and sale of underaged girls is intriguing. I enjoyed watching Barrett put each puzzle piece into place and figure out not only where Jane is, but who did this to her. I like how it intersects with Nick’s job of hunting down turned vamps. I also like that the idea of an FBI mole has taken more prominence in the story.

However, the romance of Barrett and Nick didn’t send any sparks my way. I did like that they had a history and were already “in love” until they split a year before the start of Awakened. I can’t point out anything bad or negative about their relationship, but I didn’t feel emotionally connected to them at all. And after a while, Barrett grated on me. Not only did she become a wishy-washy heroine because of continual asinine presumptions about Nick’s feelings, but she also withheld important information about the case from Nick, and she was willing to put herself in danger without telling him. I probably didn’t feel connected because the couple didn’t trust one another to open up and allow for a solid relationship for much of the book.

And I just have to put this out there because it bothers me. The FBI is killing vamps with knifes dipped in liquid nitrogen. How does that work? The liquid nitrogen would evaporate within moments of exposure to normal atmosphere, leaving a normal blade. And even if the FBI did find a way to tote around a blade with liquid nitrogen on it, the nitrogen would burn the skin of the user. I understand that this is a fictional book, but the reasons behind why a “nitrogen dipped knife” will kill a vamp never have been explained, and it seems like it’s bad science.

In the end, Awakened was better than its predecessor, with a tighter storyline and less confusion. The plot was interesting, but the execution was not fabulous. I was disappointed at the immense build up only to have a climatic scene that lasted a few paragraphs.

I did like that there were more than a few hints about a mole/s in the FBI. The book ended with several questions from the first book still left unanswered, like who is really behind the inner workings at the FBI and the Turning Program? I like this over-arching storyline, and I appreciate with the way it is being presented in small bits. I gleaned a little more this time and hopefully it will be a continuing theme that will become a stronger piece of the puzzle as the series moves forward.

Ex-soldier Barrett Miles had no idea that vampires were real—until Belladonna recruits her to serve as a covert agent and infiltrate a murderous sex ring run by the most depraved of immortals, those who feed on the purity and blood of innocents. Their latest victim: a young girl whom Barrett promised to protect. She will be sold—unless Barrett can find her first. Forced to team up with her former lover, Nick Maltese, an undercover sniper, Barrett is caught between fulfilling her personal mission and shielding her heart from the man who betrayed her.

Nick’s hunting a new breed of vampires and harboring a terrible secret when Barrett finds him. Soon a seething underworld of strange desires threatens to engulf them all. Can he save the girl and reclaim Barrett’s heart? Nick knows he has only one chance to prove himself to her as the hunt begins—and their love forces them to embrace the darkest places in their souls.

Reviews in the Series:
Turned by Virna DePaul (Belladonna Agency #1)