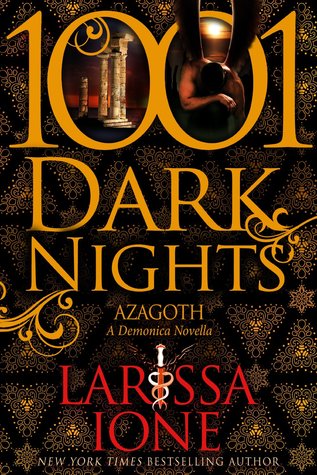 Azagoth, also known as the Grim Reaper, once was a powerful angel but now runs the demon “hell” called Sheoul-gra. Although Azagoth purportedly volunteered to fall from grace, it is obvious that there is more to the story, and only Azagoth knows the truth. After spending centuries being used by the Heavens as a breeder of a special class of angel called Memitim, angels that watch over humans who are important to the fate of the world, Azagoth demands that it end AND that Heaven send him a female mate.

Lilliana, a warrior class angel, works in the Time Travel Operations Department. She committed a grievous offense, but she claims it was due to extenuating circumstances: she was kidnapped and forced to do horrible things. Archangel Raphael doesn’t want to hear her story and gives her a choice: either mate with Azagoth and spend eternity in Sheoul-gra, or be stripped of her powers and reduced to nothing. However, she may reenter heaven within 30 days if she steals Azagoth’s chronoglass (time travel device).

Azagoth is a delightful romp into the devilishly sexy and entertaining world of the Demonica series. Although one could read and enjoy the novella as a stand-alone story, I feel that it will mean much more to those that have read the series – especially the previous full-length novel, Reaver. Ms. Ione does a marvelous job filling in some of the background of a few lesser known characters, as well as give the reader clues as to what’s going on between the Heavens and Sheoul-gra.

The romance between Lilliana and Azagoth is nothing short of flaming hot! I adored their head-spinning lust, which is further fueled by their discovery of common ground. Although the pair experience a few bumps because of hidden secrets, they enjoy a speedy courtship based on learning to open up and be themselves.

While the romance is quick-paced and swoon-worthy, there are well-placed conflicts that keep the story interesting. First, there is Lilliana’s struggle between freedom via stealing the chronoglass and her desire to do what is right, which then evolves into the desire not to hurt the man she has befriended and is falling for. Also, we meet Azagoth’s disgruntled son, Methicore, who is out to destroy Azagoth. Without knowing the truth behind Azagoth’s attitude towards his son, Lilliana draws comparisons between Azagoth and her own neglectful father, causing a few major issues between the pair.

Overall, I really enjoyed Azagoth. While it is only a novella-length book, the story packs a lot of punch: filled with sensual romance, action and conflict, and a couple of touching scenes. I probably liked it more than someone who hasn’t read the series, because I know the world, but it can be read as a stand-alone. The story is well-written, albeit a little predictable, yet genuine and entertaining. I found both Azagoth and Lilliana to be interesting and likable characters that I hope to see again in the next Demonica story coming this fall.

He holds the ability to annihilate souls in the palm of his hand. He commands the respect of the most dangerous of demons and the most powerful of angels. He can seduce and dominate any female he wants with a mere look. But for all Azagoth’s power, he’s bound by shackles of his own making, and only an angel with a secret holds the key to his release.

She’s an angel with the extraordinary ability to travel through time and space. An angel with a tormented past she can’t escape. And when Lilliana is sent to Azagoth’s underworld realm, she finds that her past isn’t all she can’t escape. For the irresistibly sexy fallen angel known as Azagoth is also known as the Grim Reaper, and when he claims a soul, it’s forever…