Heart of a Highland Warrior 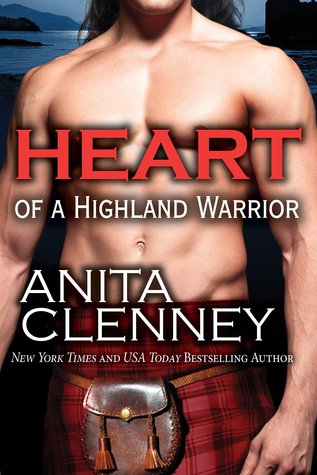 As a warrior first and always, Anna MacKinley has always needed one thing: to kill demons. Having been made distrustful of nearly all forms of affection from an early age, she mostly keeps to herself, scoffing at the idea of being romantically involved with anyone or ever having a family of her own outside of her friends and fellow warriors. But, in a world where even the rules of time itself no longer apply, nothing is ever certain, and Anna begins to realize that accepting herself, along with the past, might finally set her free from the darkness that haunts her.

Abandoning his mission to kill his assigned demon, Tavis Connor was willing to lose everything he knew and face a potentially terrifying future to help the brother he couldn’t stop caring for. Waking up with no memories, only to be tortured in a strange fortress, certainly wasn’t part of the plan, but neither was being defended by a barely-dressed woman with turquoise eyes. Thankfully, Tavis finds that destiny isn’t always cruel, and that navigating his way through this new world he’s found himself in might just balance out the losses and lead him to a happiness he never dreamed could be his.

The Connor Clan series is one I’m happy to say I’ve followed since the first book, and one that definitely benefits from having read it from the beginning. Heart of a Highland Warrior picks up shortly after the end of the last story, Embrace the Highland Warrior, and introduces us to Tavis Connor, the previously thought to be deceased brother of the hero that started it all, The Mighty Faelan. As was true in Faelan’s book, some of the funniest parts of the narrative revolve around Tavis’ bafflement when confronted with modern women, Anna, most especially. By turns, however, the pain he feels over those he left behind is so meaningful because of the same circumstances, and Ms. Clenney does an admirable job of addressing these issues without the unnecessary repetition of obvious sentimentality. Tavis’ regret is sharp and clean, but his sense of purpose along with the relief he feels at the new connections he gains allows him to move forward.

Anna I liked as well, and was glad to finally get to know more about her. I’ve always found the strength of the female characters in this series to be one of its best attributes, but, until now, Anna hadn’t been given a chance to really shine. Like Tavis, she has a lot of burdens to carry from the outset, and has learned to protect herself by shutting others out. She is both extremely resourceful and determined, and loyal to the warriors above everything else. Formidable in battle, she is respected by her fellow warriors (and sometimes feared by them, which I loved), and their fondness for her is apparent in every scene they all share.

One of the only things that bothered me about Heart of the Highland Warrior was a scene of a sexual nature that happened early on in the book that I was never really able to accept as being necessary to the story. It is a non-con situation that is forced on Tavis and Anna by an outside observer, and even though repeated assurances are made to convince one another, as well as the reader, that the blame for the incident rested fully on that third party, I felt that it was unnecessary for things to go as far as they did. I think that the event could have stopped earlier in the scene, leaving their obvious, natural sexual attraction to do its job (which is what happened anyway), and make the resulting plot device work out the same way in the end.

Given that the warriors’ only task is to protect humanity from demons and vampires, there’s plenty of action throughout the story. Daring escapes and rescues, near misses, secret missions, and epic battles abound, and I have to say they were a lot of fun to read. These sexy Highlanders eagerly launch themselves into combat to save the day (even if their assistance isn’t always needed), and the results are often as hilarious as they are nerve-wracking. Aside from a slightly confusing “catch, release, and repeat” progression during the final battle, I thoroughly enjoyed seeing the warriors in action, and feel that these are some of the best parts of the book.

As a couple, Anna and Tavis work exceptionally well together, making the pull they experience towards one another feel completely right. Lost, yet in absolute denial of the fact, they are exactly what the other needs, and I enjoyed the fight they both put up, and the resulting acceptance of their connection, very much. As is true with the previous couples we’ve seen so far, they are a good fit, and the chemistry they share is undeniable.

Filled with wonderfully vivid characters and dashing heroics, Heart of the Highland Warrior was a welcome addition to the Connor Clan series. Anna and Tavis are a well-matched and likable couple, and, with few exceptions, I enjoyed their journey tremendously. This series has a busy rotation of characters and ongoing storylines, so I highly recommend starting the series from the beginning. Overall, I really liked this story, and would love to continue along with the warriors until the very end.

Brave, beautiful, and haunted by her past, demon hunter Anna MacKinley will do anything to help the Connor Clan. Under divine orders, the headstrong warrior travels the world, slaying demons and vampires. When she stumbles upon a hidden stone fortress while searching for her clan’s lost Book of Battles, dark forces swiftly imprison her—and she discovers her cell mate is a gorgeous Scottish warrior who has no memories, but looks strikingly familiar.

And only a secret from the past can win the day…and her heart.

The warriors of the centuries-old Connor Clan are searching for their missing time-vault and the powerful relic within. What they find is a grave…and a kilt-clad body they fear is the long-lost Tavis Connor. But there may be more to the Highland warrior’s fate than a pile of bones. Desperate to save his brother and his clan’s Book of Battles from a demon hell bent on destruction, Tavis begins a 150 year quest that will end in modern-day New York. But when he wakes, he discovers he’s the one in need of help. His only hope of rescue is a bonny lass who claims to be a warrior. A warrior waging war on demons…and his heart.

One response to “Review: Heart of a Highland Warrior by Anita Clenney”