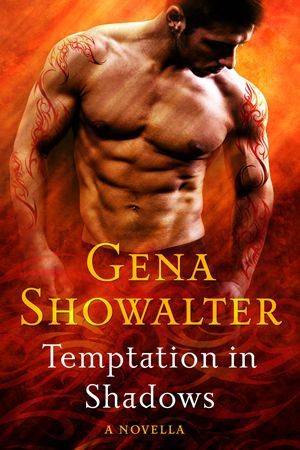 *NOTE: Unfortunately when I saw the cover of this book, I made the assumption that it was a Lords of the Underworld novella. It is NOT. While it is paranormal romance in nature, it is completely unrelated to the LotU world.

Briar Rose is an independent agency with ties to government. It is full of agents with supernatural abilities. They are safe and accepted there.

Gabrielle Huit… is a loner. Kidnapped when living on the streets as a child, she was experimented on, and a crazy scientist turned her brain into a computer. Then, she was mysteriously let go. Gabrielle has tried to live a normal yet reclusive life, moving from place to place to keep any one from discovering who she is.

Sean Walker is an undercover agent for Briar Rose, working at the nightclub that employs Gabby. He needs to gain her trust and bring her in because all of the previous subjects of the mad doctor have died when they become extremely agitated.

Unfortunately, Temptation in Shadows was not the novella I was hoping for, especially since I mistakenly thought it was from the LotU series. However, even with that piece aside, it was not a very strong or enjoyable story. Sean Walker and his fellow agent, Rowan, do not seem to have enough practical intelligence to be “covert agents,” especially when their plan to earn Gabby’s trust is by kidnapping her and then saving her. I think I literally banged my head on my desk. Sean continues to make poor decisions throughout the novella (and what agent doesn’t care about leaving fingerprints behind?!), making it very hard to enjoy the story.

Gabby is not much better. I do find the science-fiction part of the story interesting. The concept that her brain was manipulated to create a computer and that the scientist just let her go, created a fascinating potential storyline; however it didn’t evolve much beyond that. Understandably, Gabby doesn’t trust anyone, especially since she has access into their computers and can see what they don’t want anyone else to know. Yet, she seems to have no problem going along with Sean and giving him her complete confidence.

Overall, Temptation in Shadows is mediocre at best. The couple goes from nada to full on “I love you’s” in way too short of a time. Although their sex scene is hot, I never felt any emotional attachment to the pair. The overall story is weak and full of flaws that secret agents just wouldn’t make. I like the concept of what was done to heroine, but it wasn’t enough to save the entire story.

Tall, lean, muscular—and definitely rough around the edges—Sean Walker is not your typical nightclub bodyguard. He’s a controller of shadows, able to wield darkness at will. But when a mysterious woman at the club turns out to have powers greater than his own, he has no choice but seduction…

3 responses to “Review: Temptation in Shadows by Gena Showalter”