Welcome to my nine-part review special of The Kraken King by Meljean Brook. The book was released as an eight-part serialized novel. Each week after the release of a part of the novel, I have shared my review, and this is the final part! However, on June 9, 2014, I will share a special review and host a giveaway for the awesome Kraken King Poster shown above!

Today I review Part VIII. Because each part was written as a specific piece within a larger framework, each piece is rated based on the quality of the work with respect to where and when it falls within the larger story, as well as my enjoyment of the story within the context of a larger tale. The rating is not based as if this part is solely a stand alone book. 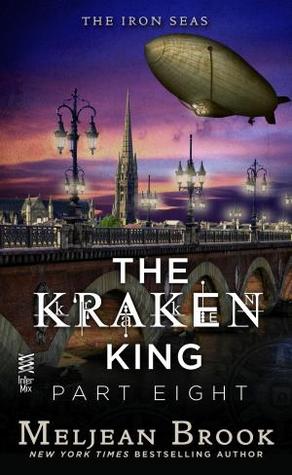 For frame of reference, this part starts with Chapter 29 of The Kraken King.

The thrilling and immensely satisfying conclusion to the best book I’ve read in 2014 is here. The Kraken King and the Greatest Adventure opens shortly after the conclusion of Part VII. Flying towards Krakentown, Zenobia sits at Ariq’s unconscious side, waiting for him to regain consciousness. She knows he will recover, but is apprehensive. After discovering that Archimedes never received her letters, Zenobia fills the time by clueing in Archimedes to all their adventures thus far.

Ariq and Zenobia, together with Archimedes, Yasmeen, Cooper, and Mara, head to Krakentown to confront Ariq’s enemies and save his town and people. Although his town is surrounded, for now his people are all safe and no one dead. Once Ariq awakes, he devises a plan to take back his town and rescue his people.

I don’t know how to conclude my series of reviews for The Kraken King without excessive gushing praise or spilling the beans as to the dramatic and fulfilling conclusion. Part VIII is effectively the last few chapters of the book, and to go into details about the plot would be too spoilerish. However, I will attempt to highlight some of my favorite components about this final part.

First of all, I loved the climatic scenes and overall direction of the ongoing plot regarding Ariq, the Skybreaker weapon, and his nemeses. Ariq was placed into an impossible situation, and I appreciate how the author addressed the complexity of the situation, coming to a conclusion that is both emotionally and intellectually satisfying. The story is written with an eye for detail, creating intense tension, which is never over-the-top or gratuitous. I cannot stress how well done the whole situation is written. The tension is taut, and Ariq stays so calm. I love how the situation is diffused via logic and reasoning.

The story also brings the reader full circle with the romance of Ariq and Zenobia, who have stolen my heart and become my favorite romantic couple. The pair has fallen so deeply in love with one another, and everything that has remained unsaid finally spills out. They share scenes that are both intimate and humorous. I simply adore their journey discovering a love that is true and deep.

Finally, the story also touches on some of the other relationships such as the one between Ariq and his brother. The pair not only hammer out some of the concerns that happened back in Part I, but also some life-long issues. I also love seeing Archimedes with Zenobia. His love for her put a smile on my face and brought tears to my eyes. It is all of these more minor pieces of the story, which take up very few pages, that make The Kraken King one of those perfect reads.

The Kraken King and the Greatest Adventure is truly the perfect ending for this saga. The stakes are high and I am happy to report that every conflict is resolved. I am completely satisfied with the emotional content, the tension and action, and the conflict resolution. I feel that Ms. Brook does a marvelous job wrapping up the story without giving readers an easy out. I am going to miss my weekly adventures with The Kraken King and Zenobia.

Arriving in Krakentown with their enemies in hot pursuit, Zenobia doesn’t know how they can even hope to win. Being terrified brings forth an undeniable truth: she loves Ariq and will do whatever it takes to stand by him.

But as their adversaries appear on the horizon, they realize that not all is lost. Drawing on the power of the terrible war machine, Ariq, Zenobia, and the entire town must put their lives on the line to protect what they love…

One response to “Review: The Kraken King Part VIII by Meljean Brook”