The Magic Between Us 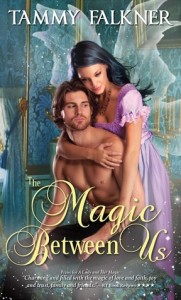 Marcus still stood with his arms outstretched.  If he wasn’t mistaken, Lucius smelled worse now than he had when they’d arrived.  “Someone take this,” he said.  But no one came forward.

He looked over at Cecelia, who’d taken Cindy and sat down on the settee with the baby burrowed tightly in the crook of her arm.  He sat down beside her and tried to balance Lucius on his knee.  But the little guy was not happy.  Not at all.

“If you hold everyone at arm’s length like that,” his mother warned, “the rest of the world will dislike you just as much.”

Ouch.  She should just pull that knife right out of his chest.  And replace it with a dull spoon.  One that she could jab into the aching wound over and over.  “I don’t hold everyone at arm’s length,” he grumbled.  “Just those who smell atrocious.”

The soft, clean scent of Cecelia’s hair rose up to tickle his nose.  He looked down at her.  She regarded the baby tucked into the crook of her arm with an air of contentment.  His heart dropped toward his toes.  He wanted that to be his baby in her arms.

“You smell so much better than he does,” he whispered to Cecelia with a smile.

She harrumphed at him and went back to looking at the baby.  Well, that was an abysmal failure.  He couldn’t even deliver a compliment well.  Allen came to stand at his shoulder and took the baby from his arms.  Thank God.  At least his brother saw fit to save him.  Allen placed the baby in his mother’s arms, and the little one ceased his wailing immediately.

“I told you he hated me,” Marcus grumbled.

“He’s not the only one,” a voice said from the doorway.

Marcus looked over and couldn’t keep the corners of his lips from rising at the sight of Ainsley.  “Ainsley!” he cried.  He got to his feet and rushed toward her.  He wanted to swing her around in his arms, but the loud clearing of his brother’s throat stopped him.  Actually, Allen sounded like he was choking to death on a chicken bone, so Marcus turned to look at him midstride.  Allen shook his head quickly.  “Don’t do that,” he said quietly but sternly.

Marcus had forgotten the rules of this world for a moment.  Instead, he took Ainsley’s hand and bowed low before it.  “Ainsley,” he said, trying to maintain his composure.  Ainsley was a sorely needed taste of home.

“Mr. Thorne,” she replied with disdain.

Good God, she hated him too?  “Welcome to Ramsdale House,” he said.

Cecelia issued a subtle warning to Ainsley with a nod of her head.  Ainsley lifted her nose in the air and ignored Marcus entirely.  But she hugged Claire and Lady Ramsdale, and let Finn take her hand.  Then she stopped in front of Allen and said, “Goodness, they do look quite a bit alike.”

“Yes,” his mother said.  “They family resemblance is striking, is it not?”

Ainsley’s mouth fell open in a most unladylike pant.  “It’s nice to meet you,” she finally stammered when Cecelia made a motion for her to close her lips.

Allen bowed over Ainsley’s hand.  “Miss…?”  He asked the question subtly with a raised brow.

“You may call me Ainsley, Allen,” she said.  His brow shot up even farther.  And then he bowed over her hand.

Claire clapped her hands together.  “I believe we’ve a  mission today.  Who’s coming?”

“Now we know how to get Marcus to stay at home.  We should take the children everywhere we go,” Ainsley whispered to Cecelia.  She laughed and covered her mouth.

“The children are staying with me,” his mother said, as she took the baby Cecelia held in her free arm.  “You all run along now.  Have a good time.   Find a killer.  Take a walk in the park, if it’s not too late.  Then come back and get the children.”

Everyone knew that Claire wouldn’t leave her children for long, not even with her mother.  “Who all is going?” Marcus asked.

“You, me, Lord Phineas, and Cecelia, since she speaks French.”  Claire patted her husband’s arm.  “Finn doesn’t want me searching for killers without him.”

Claire shrugged.  “I don’t see why not.”

“Mr. Thorne, would you like to join us?” Ainsley asked.

Allen tugged at his cravat, and Marcus forced himself not to roll his eyes.  “I’m not certain that would be wise,” Marcus said.

“Why not?” Allen barked.

Marcus heaved a sigh.  “Because you’re not fae?”

Finn clapped Allen on the shoulder.  “We humans have to stick together.  I vote that we take him.”

“I just came to collect Cecelia for our ride in the park,” Allen said.  His brother raised a brow at Cecelia.

Marcus thought Allen looked much too pleased by that invitation, damn his hide.  “That settles it.”

Claire reached into the painting and pulled out a separate painting of Sainte-Chappelle.  She hung it on the wall and then said, “Pick me up and put me in, Finn.  It’s so much easier than climbing.”

Lord Phineas didn’t even blink before he picked his wife up and put her feet first into the painting.  She held a hand back through the void and pulled him through with her.  Then she held her hand through again.  “Your turn, Ainsley?” Allen asked.

Ainsley lowered her eyelashes coquettishly.  “Don’t just stand there.  Be a dear and pick me up.”

Allen looked more than a bit uncomfortable, but he picked her up and gently shoved her through the painting as she held Claire’s hand.  Then he followed.

“That won’t be necessary,” she said, as she hitched her skirts up a little higher and climbed in all by herself.

“You could have just let me do it!” he called behind her.

“If I’d wanted you to touch me, I would have,” she called back.

Good Lord, he was in for a long afternoon.  He took Claire’s hand and dived headfirst into the painting.