I was used to far more pleasant interactions with vampires. I’d worked as a waitress at a vampire bar called Bite for six months. The nonbreathing clients were a lot friendlier than those with pulses, and they left better tips. And in the days after I’d accepted the assignment, Iris, an old high-school classmate, had had me do a series of test runs, ferrying local cross-country to drive her friend Jane from Half-Moon Hollow to Nashville for a booksellers convention. Jane had been downright sweet, keeping me entertained on the brief drive through Tennessee with her absurd life story. None of these experiences had prepared me for Mr. Sutherland’s hostile, monosyllabic reception.

In his absence, I saw that the house was comfortable and quaint. The open floor plan gave visual access to nearly everything, including the spectacular view afforded by the back windows. Rough-hewn polished pine stairs led to a bedroom loft. Comfy-looking leather chairs the color of melting caramel flanked a river-stone fireplace. Bookshelves stocked with leather-bound editions stretched floor to ceiling on the opposite wall. There was no stuffy furniture, no useless dust catchers beyond a red and gold military insignia framed and displayed on the  mantel. A lion devouring a snake.

A thump from above snapped me out of my decor ogling. I focused on the little pile of luggage near the foot of the stairs, and I slung a dark leather designer overnight bag onto my shoulder. When I bent to pick up a sleek silver suitcase, there was a blur of motion, the force of which swept my wet hair over my eyes. I lurched to my feet, pulling the damp strands out of my face, just in time to find Mr. Sutherland snatching the case out of my hands.

“You do not touch this case,” he said sternly, shoving a pristine white towel into my hands. He swept across the room to blot my puddle from the floor with a clean cloth. “I am responsible for transporting this case to Ophelia Lambert at midnight four nights from now—a deadline that your tardiness has put in jeopardy, I might add. Therefore, only I touch the case.” 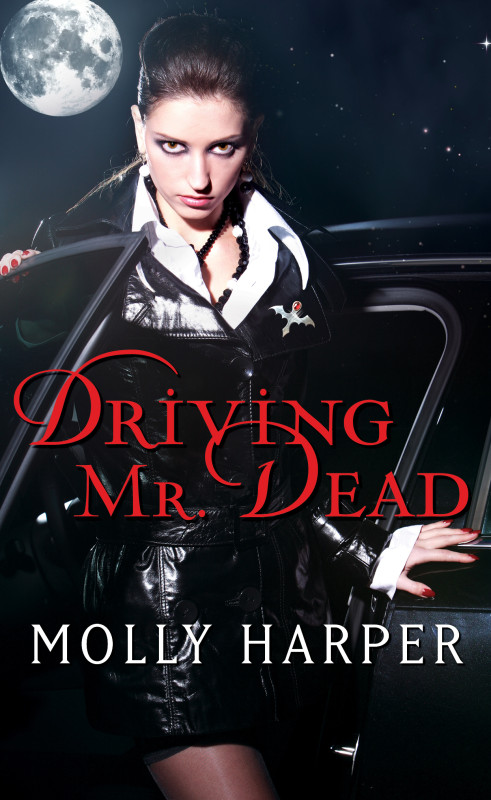 I was starting to suspect that he had unnatural feelings for that case.

I raised an eyebrow. “Are you going to be handcuffing it to your arm?”

“Very amusing, Miss Puckett,” he said, looking me up and down. “Of course, I’m forced to assume that you are the Miss Puckett described in Miss Scanlon’s correspondence, since you have not, in fact, introduced yourself to me.”

Something about the way his silky voice slid over my skin triggered my “authority figure” complex. And suddenly, I was having some very unwelcome, very naughty images of Mr. Sutherland and his hypothetical handcuffs.

“Oh, right, sorry. Hi, I’m Miranda Puckett. I’m the driver for Beeline.” I reached out my hand to shake, a hand that he pointedly ignored as he swept past me.

Shocked by his rudeness, I merely followed in his wake, muttering to myself. “Nice to meet you, too. Oh, yes, I’m sure we’re going to end up lifelong friends after this road trip. We’re off to such a great start. Feel like I’ve known you my whole life,” I grumbled, toting the bags to the car while he checked and rechecked the locks on his front door. “And I’m talking to myself again. Super.”

I stared at the warm, dry house with longing. A kinder client might have offered me use of the restroom or even coffee. But I was hardly in a position to ask for perks.

To add insult to injury, my tardiness and the weather ruined my plans to introduce Mr. Sutherland to the fabulous features of the Batmobile, which I’d thoroughly rehearsed with a very patient Jane. A decommissioned Council vehicle that Iris had purchased for a song at auction, the Batmobile was built for comfort and safety. While it looked like a mild-mannered SUV from the outside, the Batmobile boasted a light-tight cubby that took up most of the rear compartment’s floorboard, like a compact coffin, allowing the passenger to ride comfortably while I drove us in full sun. Tucked between the front seats sat a cunning little cooler/warmer for blood. It worked a bit like a bottle steamer, using hot water on a timed switch to bring the blood to an even 98.6. The windows were tinted with SPF 500 film so that he would be safe inside the cab if necessary.

Using the boatload of upper-body strength it took to close the rear door, I slammed it down. I noticed a pale flash out of the corner of my eye at the last minute. The gate came crashing down on Mr. Sutherland’s fingers with a sickening crunch.

This was a hallucination. I could not be looking at a vampire’s hand caught in a car door, crushed like something out of an Itchy and Scratchy cartoon. I clapped my hands over my mouth and let out a horrified shriek.

“Open the bloody gate!” he roared.

I scrambled for the key fob and clicked it, popping the door open. Mr. Sutherland groaned and flexed his mangled fingers, bent at bizarre angles, obviously broken in several places. Sure, they would fix themselves rapidly with his vampire healing, but it would hurt like a bitch.

“I’m sorry!” I cried, rushing forward to help him. He hissed like a cat and turned his back on me. “Shit! I’m so sorry!”

“Language, Miss Puckett,” he growled over his shoulder. “Did you not see that my hand was in the way?” He grunted as his fingers stretched and snapped back into their proper places.

“Not until the last minute,” I said. “Why didn’t you move your hand when you saw I was closing the door?”

“I thought you would stop the door,” he shot back.

“How was I supposed to do that? I don’t have vampire reflexes!”

“From now on, I will keep your limitations in mind,” he seethed, and pivoted on his heel toward the car door.

A standalone novella introducing a new side of Half Moon Hollow—featuring a freewheeling courier and the stuffy vampire she has to transport.

Miranda Puckett has failed at every job she’s ever had. Her mother just wants her to come home, join the family law firm, and settle down with Jason, the perfect lawyer boyfriend. But when Jason turns out to be a lying cheater, Miranda seizes on a job that gets her out of town: long-distance vampire transportation. Her first assignment is to drive vampire Collin Sutherland from Washington to sleepy Half Moon Hollow without incident—no small feat for a woman whom trouble seems to follow like a faithful hound dog! And she has to do it without letting her passenger—the most persnickety, stuffy, devastatingly handsome vamp she’s ever met—drive her crazy. As she and Collin find disaster on the roads, they also find an undeniable spark between them. Could Miranda have found the perfect job and the perfect guy for her?

Pocket Star is generously donating five (5) digital copies of Driving Mr. Dead by Molly Harper to give to five (5) lucky commenters. To enter, please leave a comment at the end of this post, and be sure to include contact information if it’s not included in your profile. The giveaway is open until Sunday July 27, 2014 at 12:00 AM (midnight). Winner(s) chosen at random from all eligible entries. This contest is open to U.S. residents only, where not prohibited by law. Open to participants, 18 years or older, who are legally allowed to participate in such a contest as allowed by their local laws. All federal, state, local, and municipal laws and regulations apply. Void where prohibited. No purchase necessary. By participating in the contest, participants agree to be bound by the decisions of the contest sponsor. Winners will be given a code to redeem on the Simon & Schuster U.S.’s page; must be redeemed within one year. This blog nor its reviewers or owner are not responsible for items lost in the mail. By entering this giveaway, participants agree to abide by these terms.