Welcome to the Riptide Publishing/L. A. Witt blog tour for Noble Metals! Thank you to That’s What I’m Talking About for hosting me. 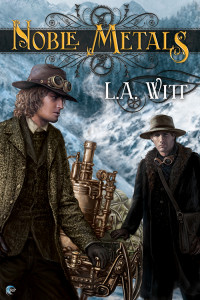 Ever since Robert Belton gambled away the money to stake his claim in the Klondike gold fields, he’s been stranded in Seattle working as a prostitute. When an attractive customer needs help hauling provisions to the frozen north, Robert eagerly volunteers.

Dr. John Fauth is only searching for one thing, and it isn’t gold. He needs platinum for the prototypes of his revolutionary inventions, and if he doesn’t find it in the Klondike, his university career—and his research—is over.

Getting to the Klondike is a grueling, dangerous journey, and just hours after leaving Seattle, John and Robert find themselves in over their heads. John is carrying an invaluable device that his competitors will do anything to get their hands on. And as the cold nights and mutual desire pull John and Robert closer together, they discover that they have much more to lose than gold or platinum.

(Publisher’s Note: This book was previously published by a different press; it has since been edited extensively and expanded by over 10,000 words.)

L.A. Witt is an abnormal M/M romance writer currently living in the glamorous and ultra-futuristic metropolis of Omaha, Nebraska, with her husband, two cats, and a disembodied penguin brain that communicates with her telepathically. In addition to writing smut and disturbing the locals, L.A. is said to be working with the US government to perfect a genetic modification that will allow humans to survive indefinitely on Corn Pops and beef jerky. This is all a cover, though, as her primary leisure activity is hunting down her arch nemesis, erotica author Lauren Gallagher, who is also said to be lurking somewhere in Omaha.

L.A.’s backlist is available on her website, and updates (as well as random thoughts and the odd snarky comment) can be found on her blog or on Twitter (@GallagherWitt).

Every comment on this blog tour enters you in a drawing for a choice of two eBooks off L.A. Witt’s backlist (excluding Noble Metals) and a $10 Riptide Publishing store credit. Entries close at midnight, Eastern Time, on July 19th, and winners will be announced on July 20th. Contest is NOT restricted to U.S. entries.

Stop back later today for B.’s review of Noble Metals.