Thanks so much to That’s What I’m Talking About for hosting me on the tour for Running Wild: Havoc Book 1.  This is the start of a brand new series, with different heroes for each book and HEAs at the end of each book.  Sean Rush and Ryker stole my heart a long time ago, and I’m excited for you guys to meet all of them.

Here’s a snippet from a scene toward the middle of the book. Ryker has just proved to Sean that he doesn’t mind his MC knowing they’re together — by kissing the hell out of him in front of everyone. And then he tells Sean to get on the back of his bike, so he can take Sean home. Sean has objections…

Still, I kept my voice down so no one could hear when I told him, “I’m not riding in the bitch seat.”

He was trying not to grin, but failing. “Why not?”

“I know exactly what it means when you ride on the back of a guy’s bike.”

“It means you fucking own me, Ryker.”

His words were a low rumble that shot straight to my dick and holy fuck . . . I had no answer. Well, obviously I did, but I refused to put voice to it.

I was out—that wasn’t the issue. And obviously being out wasn’t an issue for him either. But the MC shit, we’d never talked about it, what it meant for us. All these men knew about our relationship, knew he was looking out for me. Knew he considered me his.

I swear I had to remind myself to breathe.

This time, Ryker’s tone left no room for argument. If anything, it made me harder. I stopped thinking—par for the course when I was around Ryker—and I got on the bike behind him.

FYI, I’m also writing a m/f MC series under the Steph Tyler name—the first book of that series, Vipers Run is out now as well.  And there’s a very light crossover in that you’ll see names of MCs that are main characters in my Vipers series—namely Vipers MC, along with the Heathens.  Havoc’s friendly with Vipers, not so much with Heathens (they seem to be everyone’s enemy at the moment). 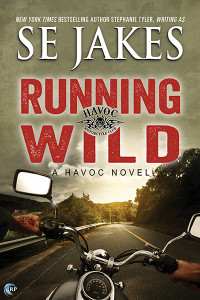 Sean Rush is an adrenaline junkie. That’s why he was in the Army, why he steals and races classic muscle cars . . . and why he can’t stay away from bad boy Ryker, a Havoc Motorcycle Club lieutenant. Fortunately, Ryker can’t seem to stay away from Sean—he’s spent the last eight months breaking into Sean’s apartment and stealing into his bed, leaving Sean physically satisfied but increasingly restless.

Sean has always avoided relationships. He likes to come and go without being controlled. And Ryker is possibly the most controlling man he’s ever known. Still, he finds that he wants more from Ryker than their silent nighttime encounters.

Then one of Sean’s thefts goes bad, and Ryker’s protective instincts kick into overdrive. He takes Sean to the Havoc compound, determined to keep him safe. But Sean’s past threatens the safety of Havoc—and everything Ryker holds dear. Worse, Ryker’s hiding secrets of his own. Soon it’s obvious that the adrenaline rush can’t keep them together anymore. But maybe love can.

SE Jakes writes m/m romance. She believes in happy endings and fighting for what you want in both fiction and real life. She lives in New York with her family and most days, she can be found happily writing (in bed). No really…

She spends most of her time writing but she loves to hear from readers!

SE Jakes is the pen-name of New York Times Bestselling author Stephanie Tyler (and half of Sydney Croft) — please go to my media kit to learn more! 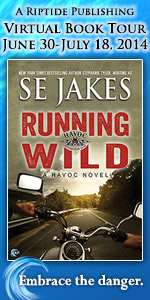 Riptide is generously donating a $100 Gift Card to Riptide Publishing and a print copy of the Hell or High Water series. To enter, please fill out the Rafflecopter form AND follow any directions included. The giveaway is open during the time specified on the Rafflecopter form. Winner(s) chosen at random from all eligible entries. This contest is open internationally where not prohibited by law. Open to participants, 18 years or older, who are legally allowed to participate in such a contest as allowed by their local laws. All federal, state, local, and municipal laws and regulations apply. Void where prohibited. No purchase necessary. By participating in the contest, participants agree to be bound by the decisions of the contest sponsor. Prize will be delivered by the author. This blog nor its reviewers or owner are not responsible for items lost in the mail. By entering this giveaway, participants agree to abide by these terms.

Entries close at midnight, Eastern Time, on July 20, and winners will be announced on July 21st. Contest is valid worldwide.