My heart’s beating a little too fast and my eyes keep darting toward the door. He’ll walk through there any moment now. There are only a handful of barflies to distract me, and the kinds of drinks they order don’t take a lot of thought to make. This is not a Mojito Sparkler type of crowd.

Most of the people who come to drink at Ivan’s are men. They come to lose themselves in alcohol and sports. The few women who show up are looking for a special kind of trouble. This isn’t the place you come to in hopes of picking up a nice guy.

I know these women. Maybe not personally, but essentially I know who they are and what they’re about: disheartened or damaged, looking for men who can inflict enough pain to help them forget the pain that’s coming from within. Screwing assholes, making themselves vulnerable to emotional predators—it’s just another form of cutting, really. Every time they smile at a Hells Angels type I can see the unspoken words hovering over their heads.

Here’s the knife. Hurt me so I don’t have to hurt myself. Take away the responsibility and just give me the pain.

I get it, I really do. But it’s not my game, not anymore.

So I just pour the beer, keep the whiskey flowing, keep my smile evasive, cold enough to scare away the more aggressive ones, warm enough to coax the tips out of the passive . . . and keep my eyes on the door.

And then it happens. At exactly seven fifteen, he shows up.

I feel an acute pang in my chest, right where my heart is.

Lander Gable. How many times have I seen this man walk into this bar while I was sitting across the street in a cab or rental car? But now, today, I’m in the bar, and he’s walking toward me, not away. I’ve never been so close to him before. I can almost touch him!

And soon I will.

The ringing of the phone momentarily distracts me. 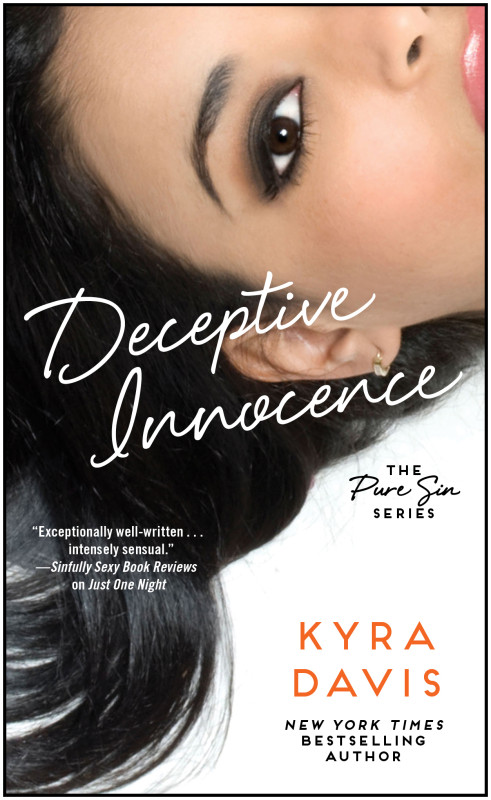 I pick up and ask, “Ivan’s, can I help you?” The person on the other end mumbles an embarrassed apology for calling the wrong number and hangs up, but I keep the phone pressed to my ear long after hearing the click, pretending to listen while I study the perfect specimen in front of me: a clean-shaven face, bronze skin, a watch that’s worth more than everything I own . . . Only he’s replaced the suit he wore to the office today with a pair of Diesel jeans and a sweater. Less conspicuous, but still a little too clean for this place. His physique hints at time spent at a gym, not a dockyard.

You’d think some of the other guys would kick his ass just for entering their bar.

And yet absolutely no one gets in his way.

It’s not until he’s almost at the bar stool that we make eye contact. He doesn’t smile, but there’s something there—curiosity maybe, perhaps surprise at finding a woman bartending, definitely appraisal.

I’ve gotta give myself a major pat on the back for that one. I must have spent two hours putting myself together today for him. He’s why I’m wearing my wild black hair down, letting it cover my bare shoulders. He’s why I matched the loose, low-slung jeans with a fitted tank that subtly reveals the benefits of my new push-up bra. He’s why I’m wearing thick mascara and sheer lip gloss. I know this guy’s tastes.

He takes his seat, pulls out a ten, and gestures to the bottle of whiskey still in my hand from the last drink I poured. “On the rocks, please.”

“You sure?” I ask even as I fill a glass with ice. “I could make a whiskey sour if you like. Maybe throw in a cherry?”

He raises his eyebrow slightly. “Mocking a patron when you’re new to the job? Risky, isn’t it?”

“How do you know I just started?”

“A few times a week.” He reaches for his drink, brings it to his lips. Over the glass he offers a bemused smile. “I like your prices.”

“Really?” I ask. “Drinks more expensive where you’re from?”

“You make it sound like I’m visiting from some far-off land.”

His light-brown hair looks darker in this room, his eyes brighter. “Upper East Side,” he says.

“Ahhh.” I take a step back and cross my arms over my chest. “That’s about a million dollars from here.”

He winces. “Not necessarily.” On the other side of the bar a few men burst into cheers as a UFC fighter’s arm is broken on live TV.

“No,” he answers, his smile returning. “I’ve managed to avoid that fate.” He studies me for a moment, trying to gauge what he’s dealing with. “How ’bout you? You live here in Harlem?”

“Occasionally. I’m a bit of a drifter.” I fiddle with a glass, playing at cleaning it. “So why do you really come here . . . I’m sorry, I didn’t get your name.”

He gives me a quizzical look. “Considering how coy you’re being about what part of town you live in, I feel like maybe I shouldn’t volunteer my name just yet. That way we both have an air of mystery.”

“Oh, I’m only coy about inconsequential things.” I lean forward, put my elbows on the bar, and cradle my chin in my hands. Ever so slightly I arch my back. “I’m very straightforward about the things I want.”

“Really?” He takes another sip. “And what exactly is it that you want?”

His smile spreads to a grin. “You think you can coax it out of me?”

“Maybe.” Out of the corner of my eye I spot one of the regulars on the other side of the bar waving his empty glass in the air. “When I have the time.”

And I walk away to pour the next drink.

The foreman needing the refill is too drunk to notice that I’m trembling while taking his money.

God, is this working? Am I being too forward? Too much of a tease? My mother would have chewed me out for behaving like this.

Click here to continue reading the excerpt at XOXO After Dark!

Ever since Bell’s mother died while serving time for a murder she didn’t commit, Bell’s been focused on one thing: revenge. She knows her mother was set up by Jonathon Gable, the head of both the powerful Gable family and an international banking corporation. Now she’s determined to take him down—from the inside.

Bell needs access to the Gable home and offices, so she poses as a bartender to seduce her way into the bed—and life—of Jonathon’s rebellious youngest son, Lander. He’s not a typical Gable, spending more time in the dive bars of Harlem than the posh cocktail lounges of the Upper East Side. He has an attraction to danger, a vulnerability Bell isn’t shy about exploiting. It should be easy to uncover the secrets she needs to destroy his family and clear her mother’s name.

But it turns out Lander is much more complicated than she ever imagined. He’s enticing, intelligent, mysterious—plus their sexual chemistry is off the charts. Even though Bell knows he’s the enemy, she can’t help but be moved, both physically and emotionally, by the man she swore was just a target. When he finds out the truth she’s sure both their hearts and her plan will be crushed…until she begins to realize that Lander might be hiding his own secrets, darker than she ever imagined.

Pocket Star is generously donating five (5) digital copies of Deceptive Innocence by Kyra Davis to give to five (5) lucky commenters. To enter, please leave a comment at the end of this post, and be sure to include contact information if it’s not included in your profile. The giveaway is open until Sunday August 3, 2014 at 12:00 AM (midnight). Winner(s) chosen at random from all eligible entries. This contest is open to U.S. residents only, where not prohibited by law. Open to participants, 18 years or older, who are legally allowed to participate in such a contest as allowed by their local laws. All federal, state, local, and municipal laws and regulations apply. Void where prohibited. No purchase necessary. By participating in the contest, participants agree to be bound by the decisions of the contest sponsor. Winners will be given a code to redeem on the Simon & Schuster U.S.’s page; must be redeemed within one year. This blog nor its reviewers or owner are not responsible for items lost in the mail. By entering this giveaway, participants agree to abide by these terms.

Today’s question: What is your favorite genre to read?