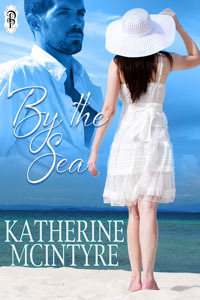 Meggie has spent her whole like in Weymouth, a little sea-side town. She works two jobs to make ends meet. When Meggie was young, she had an imaginary friend, but Niall wasn’t like ordinary imaginary friends. He stuck by Meggie’s side all the way through middle school, swimming with her in the waves and helping her find unique shells. Then seven years ago, Niall vanished.

Now Mason shows up in town, working as a new hire at the restaurant Meggie works. Not only does Mason look identical to Niall, but he seemed genuinely interested in Meggie’s unique shell necklace. Is it just a coincidence?

By the Sea is a short and sweet paranormal romance, with a simple yet interesting storyline. Ms. McIntyre does a good job giving readers a solid backstory and creating a heroine I want to cheer for. While there isn’t space for a whole lot of plot, there is just enough to create an enjoyable tale.

Overall, I found only a few small issues with the story, and even those are minor. It bothered me how much Meggie continually doubted her own sanity and how often she referred to Niall as her “made-up friend.” I also felt Mason made a decision or two that were a bit presumptuous.

By the Sea is a sweet, PG-rated romance. It is very short, but the author does a good job creating interesting characters with a decent backstory and a story with a solid conflict.

Most kids had imaginary friends, but most weren’t like Megan’s friend Niall. There were rules: only at night and only by the sea. She could’ve sworn he was real, but when someone vanishes without a trace, what else can you believe?

All that was seven years ago, buried in the past until Niall shows up in town with his tight swimmer’s body and easy smile. For Megan, just the sight of him is enough to tear open a scar that never fully healed. However, their reunion only elicits more questions. Niall’s keeping secrets, unbelievable ones, and as Megan delves into the supernatural depths of who he really is, she’s sure he’ll vanish again.

Megan’s not stupid—she knows how bad it’ll hurt if she gets involved. The first time Niall disappeared, she never thought she’d recover. But the moment they lock eyes, it’s too late—because Megan will go to any length to see that boy smile.

Purchase Info:
By the Sea