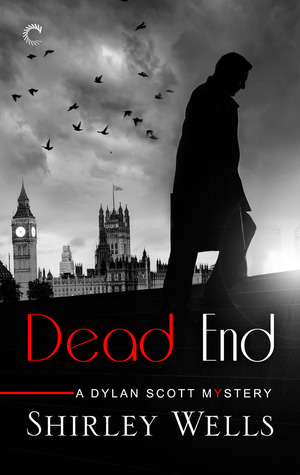 Dead End picks up right after the conclusion of the previous book, Deadly Shadows, when we found out that Dylan is receiving death threats and his wife, Bev, has cancer. Dylan, together with his former co-worker, Detective Sergeant Pike (Pikey) and former boss, Frank, try to figure out who is at the other end of the mysterious, menacing phone calls. The group manages to come up with two likely suspects, and Dylan spends every waking moment, when he’s not worrying about Bev, using his investigative skills to track the suspects and stop the threats.

Dead End is another wonderful addition to Ms. Wells’ gripping Dylan Scott series. Like the previous books in the series, Dead End weaves an engrossing mystery, which keeps readers guessing whodunit until the very end. However, unlike prior stories, instead of Dylan being hired by someone unknown to track down a murderer, this mystery is personal for Dylan. This gives Dead End a much different – more urgent – feel when compared to the other books.

In addition to being a more personal story, Dead End is also much darker than any of the preceding books. Not only is there more than one murder, there is also a rape scene. Although the scenes are not graphically detailed, they are gruesome. This, together with the personal nature of the story, makes Dead End an emotionally gripping tale with some dire moments.

As I have said over and over in my reviews of the series, one of the best things about the Dylan Scott mysteries is the secondary storylines and alternate character perspectives. Ms. Wells does a wonderful job chronicling Dylan’s personal life without letting it overwhelm the mystery. This time around, it’s Bev who shines. I’m not going to lie… there are some tough moments, both honest and real. Her frank discussions with Dylan over her fears about the future are raw and pack a punch.

All in all, Dead End is wonderful, engrossing mystery coupled with an emotionally personal tale. Although it can be read as a stand alone story, knowing Dylan’s history as shared throughout the previous books makes the personal nature of the story more meaningful. By the end of the book, I was a bit drained, yet I cannot wait to read the next one!

Somebody is making threatening calls to private investigator Dylan Scott. This is one case with plenty of suspects—a lot of dangerous people would love to see Dylan with a bullet between the eyes. The twisted trail brings Dylan face-to-face with old foes and a few new ones—and they’re all keeping deadly secrets

But as he chases leads across London, his adversary is hunting down victims and is drawing ever closer to his ultimate target: Dylan. Someone from Dylan’s past is on a killing spree, and if he doesn’t connect the dots in time, the dead end will be his.

One response to “Review: Dead End by Shirley Wells”