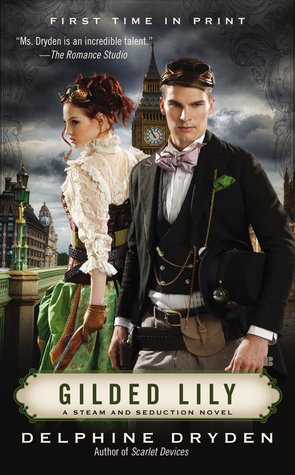 Gilded Lily is the third offering in the Steam and Seduction series.  In this adventure we follow Frederique “Freddie” Murcheson and Barnabas Smith-Grenville, two opposites who do attract.  Although this novel feels a bit transitional, setting up new plots while circling back to finish up some elements introduced in the previous two novels, I liked it.

For me, the Steam and Seduction series is steampunk that is more romance than science, but it’s still fascinating.  What hooked me are the characters.  I enjoy the independent and empowered heroines who seem to characterize this series.  Freddie is a great example.  As the daughter of a titled gentleman, she should be married and continuing the wealthy line of her husband.  Freddie has different ideas though, and would rather spend her time tinkering and fixing devices.  In order to do so, she creates an alter-ego, Fred Merchant.  I love how technical Freddie is.  She is great at looking at something, taking it apart, figuring it all out and then putting it back together better than it was.  In many ways, she knows what she wants; it is just a matter of figuring out how to secure it in a society that frowns on it.

Barnabas was a different hero than what I expected.  In the previous titles, the heroes were not alphas, but did seem accomplished and strong.  Barnabas on the other hand seems to just bumble along in life, like a ship without an anchor.  He has direction, he quests to find his long lost brother, Phin, whom he believes is not lost to an opium addiction, but, his attempt to uncover his brother in the previous novel, Scarlet Devices, ended poorly for him. However, with the lead that Eliza gives him regarding Phin, he gets a position in London that might help him track his brother down.  The position he obtains is in essence babysitting and spying on Freddie for her father.  We discover quickly that undercover work is not a good career choice for Barnabas. He is a bit clumsy and not terribly sneaky.  In fact, he seems like the perfect eldest son, the heir to an earl, trained to be a titled gentlemen running an estate and investments and dabbling in politics.  The contrast between him and Freddie is drastic but they seem to find a middle ground: that being that he seems to just follow along with Freddie in a supportive assistant manner.

Although it seems light on plot in some ways, the adventure and suspense is all there as Barnabas follows Freddie and attempts to unearth what her father is really doing, and help to find Phin.  I found that it was difficult to put down as the action and drama thickened.  However, what seemed very simple to begin with ended up being complicated in a manner I’m not sure I understand.  There are many loose ends at the end of Gilded Lily.  Although Phin is found, the tunnels from the first book Gossamer Wing are damaged and I’m not sure what their fate is.  Nor am I sure of the fate of the spy work of Freddie’s father or the fate and future of the squids.

Speaking of loose ends, the HEA for Barnabas and Freddie is an ambiguous one.  Although they do end up together, their story does not seem finished for me.  I hope we get to see more of them in the next novel and hopefully have a final answer from them.  I am also interested in knowing Phin’s fate as well as the fate of Freddie’s best friend, Sophie.  In fact, I hope Phin’s story is next in the Steam and Seduction series.

Overall, I liked Gilded Lily.  Although Barnabas was a different hero than the previous ones, he was an excellent complement to Freddie and they worked well as a team and were a passionate couple.  I was happy that Barnabas is reunited with Phin and that it is implied we may be more of them along with Freddie and Sophie in the next novel.  The overall story of the tunnels, the giant squids and the spy group was interesting but seemed as if we are left with more loose ends.  However, it was still a gripping and fun read and I look forward to more in the Steam and Seduction series.

Frederique Murcheson’s introduction into society hasn’t gone smoothly—some would even call it a disaster. Only Freddie considers her debut a success. Her scheme to become a makesmith has gone off flawlessly. The only thing that could upset her plans now would be if someone discovered that brilliant tinker Fred Merchant is, in fact, a lady in disguise.

Wooing a spoiled heiress is not exactly Barnabas Smith-Grenville’s idea of high espionage. However, considering his brother disappeared on the job, supposedly into the most iniquitous of opium dens, he cannot expect much better. At least the assignment will afford him time to search for his brother, whom he suspects is in spy-related trouble rather than a drug-addled haze.

But when Freddie proves to be both irresistible and the key to the answers he seeks, Barnabas finds himself not only entwined in a scandalous mystery involving lethal submersibles and deranged dirigibles, but also in a dangerous game of the heart…