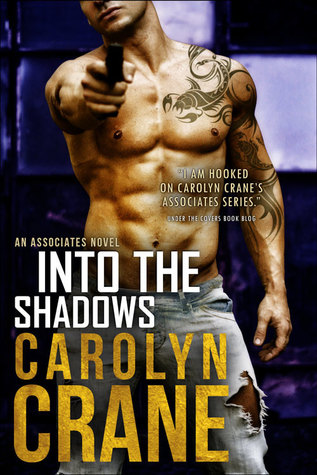 Nadia Volkov, aka the Party Princess, grew up a spoiled gangster’s daughter, believing that her mother died in childbirth. Her father, Victor, ran a huge business to include drugs, money laundering, prostitution, and sweatshops. After her father died two years ago, Victor’s righthand man, Thorne, broke the business up into four parts and allowed high-powered gangs to each run a different sector.

Thorne and Nadia shared a brief but scorching secret romance that ended when Thorne moved on to join the Hangman gang. Soon after, Nadia found out that her father had lied to her and that her mother may still be alive working in one of the sweatshops. Now Nadia and her ex-bodyguard turned friend, Richard, are raiding the co-ops to find her, while Thorne and the Hangmen will stop at nothing to find out who is behind the co-op thefts.

Carolyn Crane knows how to write great romances, and Into the Shadows, the third story in The Associates series, is another perfect example. Thorne and Nadia have a history and unknown to him, an 18-month old son. The story is told in a series of flashbacks where we learn so much about both characters. Their past is filled with intense and smoldering sex, but they also shared a kinship that neither ever had with anyone else in their respective lives. They were two lost and lonely souls, only finding a fit with one another. However misunderstandings and commitments tore them apart, leaving both with huge holes in their lives.

The beginning of the book was a little difficult to digest in one reading because of the volume of backstory story presented. I love that there is a tortured history for our hero and heroine, and once I got further along in the story, I got used to the flashbacks and enjoyed the backstory more; it just took some time to take it all in at first.

Ms. Crane does a marvelous job creating palatable emotional tension and turmoil. She does this by building an engaging backstory and then carrying the established emotions forward into the characters actions and motives. The characters are not perfect, which makes them so enjoyable. The underlying theme of redemption is a big part of the story, and it is woven into every action seamlessly.

Thorne is the perfect tortured, bad-boy hero. He’s working undercover for The Associates, but he’s really in it for himself. He’s after Jerrod, the leader of Hangman, because of his involvement in Thorne’s sister’s death. Thorne is all alone and prefers it that way. Ms. Crane does a great job creating a three-dimensional character with flaws and hard-to-deal with behaviors. And it’s Thorne’s actions that are most telling of his true nature, and eventually his emotional maturity. He does not trust anyone and prefers to be hated and alone. He wants to trust someone (other than Nadia) and be part of a true team, but it’s so hard for him. I like that he tries, and the growth of his character during the course of the story is genuine and moving.

Nadia is also a well-developed heroine. While her changes from party girl to mom and savior occur prior to the start of the book, she continues her own transformation, especially when it comes to her relationship with Thorne. The contrast between Nadia of flashbacks and her current thoughts and actions demonstrate her own emotional development. I love how we see that most in her actions with Thorne – when she refuses to jump back into their former games when she would shame him and call him a loser and brute.

The perfect compliment to the powerful emotional tension and dynamic characters is an antagonist who is easy to hate. The scenes from Jerrod’s point-of-view create nerve-wracking suspense that kept me worried for Nadia, Thorne, and their friends. I appreciate that his intelligence is not underplayed and is in fact, probably equal to Thorne’s.

All in all, I thoroughly enjoyed Into the Shadows. It was easy to get wrapped-up in Thorne and Nadia’s plight and scorching love. The author does a solid job on the suspense part of the story, keeping me worried about what would happen next. Although the backstory was tough for me to follow at first, after a while the integration felt natural and the story flow smooth, and was necessary to build such a powerful romance. My only complaint is that although everything was wrapped up by the end, I felt like I needed more… I wanted to see how life would work out for our hero and heroine knowing the situation they faced moving forward. Still, Into the Shadows is a highly enjoyable and addictive story!

He’s working undercover for the good guys. That doesn’t mean he’s one of them.

HE’S A KILLER.
Thorne McKelvey knows exactly how Nadia sees him—as a brute and a killer just kinky enough to play her sexy games. And that’s how it has to stay. Leaving her was the hardest thing he ever did, but his undercover mission could blow up at any second. No way will he drag Nadia down with him.

SHE CAN’T RISK HER HEART.
Maybe it was foolish to fall in love with her late father’s deadliest henchman, but Nadia Volkov’s not sorry; without Thorne she wouldn’t have their beautiful little boy. There’s nothing she won’t do to protect Benny, which means she must hide his identity—especially from his father.

Now Thorne has burst back into her home, searching for clues to a gangland mystery…and stirring a hunger Nadia hasn’t felt in two years. But Benny’s identity isn’t the only secret she’s keeping, and things are turning deadly. Can Thorne and Nadia trust each other long enough to stay alive and have a chance at happiness?

Purchase Info:
Into the Shadows (Associates #3)

5 responses to “Review: Into the Shadows by Carolyn Crane”