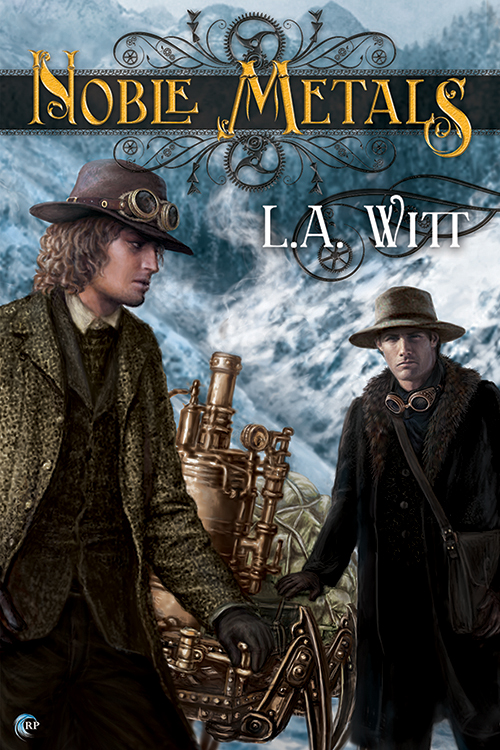 From the moment the distinguished, self-assured gentleman walked into the brothel where he worked as a prostitute and bartender, Robert Benton’s curiosity was piqued. Upon learning that the man was headed to the gold fields he had been yearning for since his arrival in Seattle, Robert knew the handsome stranger would likely be his last chance to start the new life he’d come north for in the first place. Finding love—and losing it—along the desperate and ragged trail to find gold certainly wasn’t something he’d ever dared to consider.

Brilliant and determined, and somewhat eccentric if his employers and peers are to be believed, Dr. John Fauth needs something most other men headed to the Yukon haven’t even considered in their quest to strike it rich in the harsh Canadian wilds. With time and resources running out at the university in Chicago that employs him, he’s got to accomplish what he set out to do or he’ll lose everything. Sometimes, though, even the most meticulously laid plans have a way of coming undone, and John learns that falling apart might just be his only saving grace after all.

From the beginning, it’s clear that Noble Metals relies heavily on its romantic elements, which are occasionally over-the-top, but suit the story well. As John’s feelings towards Robert grow, his priorities change, even though he doesn’t act on his new convictions and alter his course until it’s almost too late. The contrast between the unforgiving cold of the environment and the warmth of the men’s mutual affection was a nice touch, and is the focus of much of the narrative, but since their ill-timed love affair is one of the best parts of the story, I enjoyed reading about it tremendously.

Something I didn’t expect was how engrossed in the events of the tale I became, but I found the narrative to be more and more intriguing as the perilous nature of the men’s journey increased. Robert and John face a number of dangers as their story progresses, and the severity of their situation grows along with the desperation of those around them. Although I’m not overly familiar with the details of the gold rush of the Yukon, and can’t attest to the accuracy presented in Noble Metals, I was drawn in by the battle between hopelessness and resolve the men undergo. There are plenty of conflicts going on here, making rooting for John and Robert an easy thing to do.

As a huge fan of Steampunk, I was happy about the “mechs” that played such an important role in the society that evolved around the gold rush, but would have been happier still to see even more. The introduction of certain advanced technological concepts were smartly done, however, and John’s geeky enthusiasm was as endearing as it was occasionally comical. Sure, some of the more techy elements could be picked at unnecessarily, but that wouldn’t be any fun. And I thought Noble Metals was a lot of fun as is.

The relationship between Robert and John was unique, as far as romance goes, which I also appreciated. At first, it is that of prostitute and customer, then colleagues, then friends-with-benefits, and finally lovers. It’s an unusual progression, but one that works well by establishing the explicit nature of their arrangement early in the story while allowing the plot to successfully bear the weight of the ever-building tension. Each of their encounters seems at once desperate and affectionate (to increasing degrees), Robert’s previous detachment standing no chance against John’s earnest, and thorough, desire.

Noble Metals was a wonderful escape for someone like me, with its wildly fantastical, technologically explorative intrigue and m/m romance. While I was ultimately glad for the ending John and Robert achieved, parts of the final chapter and epilogue made me feel as though the extremes involved between the two were more of a leap than I could accept as easily as I did the rest of the story. Aside from that, I enjoyed story a great deal, and would love to read anything else in the same universe. Ms. Witt is an instant “go-to” author for me at this point, and Noble Metals is a definite keeper.

Ever since Robert Belton gambled away the money to stake his claim in the Klondike gold fields, he’s been stranded in Seattle working as a prostitute. When an attractive customer needs help hauling provisions to the frozen north, Robert eagerly volunteers.

Dr. John Fauth is only searching for one thing, and it isn’t gold. He needs platinum for the prototypes of his revolutionary inventions, and if he doesn’t find it in the Klondike, his university career—and his research—is over.

Getting to the Klondike is a grueling, dangerous journey, and just hours after leaving Seattle, John and Robert find themselves in over their heads. John is carrying an invaluable device that his competitors will do anything to get their hands on. And as the cold nights and mutual desire pull John and Robert closer together, they discover that they have much more to lose than gold or platinum.

One response to “Review: Noble Metals by L.A. Witt”