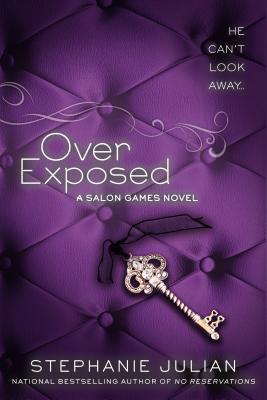 Greg Hicks, famous Hollywood producer, is back in the Philadelphia area to finish writing a screen play. He’s staying at his friend, Tyler Golden’s not-yet-opened retreat, where Sabrina “Bree” Rodriquez is also working for the Goldens.  Bree and Greg met briefly (in the previous book, No Reservations) when he photographed her as a favor to Tyler’s fiancee, Kate. With the heavy weight of an undeniable mutual attraction hanging over the pair, they must decide if giving into their lust is worth the potential head and heart aches that will certainly follow.

I am a huge fan of Ms. Julian’s Salon Games series. The first two titles are emotionally gripping, full of interesting characters and sizzling romance, and thankfully, Over Exposed is no exception. I was immediately drawn into Bree and Greg’s story. Ms. Julian creates an air of desire that is so powerful, I could feel it deep in my own being. The story, while full of sensual scenes, is driven by the character’s emotions, both positive and negative. Finding their way through the onslaught of desire, fear, and doubt kept me reading late into the night.

I genuinely like and care about the characters. It was easy to get wrapped up in the emotions of both Sabrina and Greg; they have undeniable chemistry that translates into an engrossing read. I was left hanging on every thought and encounter, hoping and waiting for the pair to find their way to a happily-ever-after. However, there is a lot of second guessing on the part of both characters. Overall, it didn’t bother me and fit into the story, but towards the end, I wanted more confidence, especially on the part of Sabrina. I felt like for most of the story she never really wanted to give Greg a chance because she was convinced he would leave her.

Side characters, such as Sabrina’s new friend, Sabastian, and Greg’s ex, Daisy, add some stress to the couple’s situation, but the conflicts did not come across contrived. I found that both characters added a lot to the tale without overwhelming the already tenuous relationship. In addition, Greg’s work schedule and career add an appropriate amount of non-sexual tension.

Also, I was disappointed with how quickly the story ended. While I was happy with the direction of the conclusion, I was not satisfied with the execution. I felt the h/h were cheated out of a really good and necessary conversion, which I had anticipated throughout the story. Instead, things just sort of fell into place, and the characters each made decisions about their mutual future independently and without dialogue. Unfortunately, his left me feeling a little bit unsatisfied after finishing the book.

Despite the way the story ended, I still enjoyed Over Exposed quite a lot. I came to care about Greg and Sabrina and the direction of their relationship. I found that even after the book was over, I was still thinking about the pair and wondering how things are working out for the couple. I look forward to catching glimpses of Greg and Sabrina in future installments of the Salon Games.

Greg Hicks is a Hollywood power player. For years he’s enjoyed the perks that come with being a top director and producer: the influence, the wealth…the women. But none of his many conquests have ever possessed the incredible sensuality of the young woman he once watched lose all inhibition in front of his camera.

Sabrina Rodriquez’s life is far from a Hollywood dream. Refusing to make the same mistakes as her unlucky-in-love mother, she’s focused on her first real job and avoiding all distractions, especially those of the male variety. Yet a man as compelling as Greg is difficult to ignore. And the desires he awakens are even harder to quench.

While a winter storm rages, a night at Haven Retreat leaves Sabrina’s and Greg’s temperatures rising. As Greg introduces Sabrina to the pleasures of voyeurism and exhibition, she unleashes his most decadent passions—and his creativity. But having Sabrina as a muse isn’t enough. He wants her to take a starring role in his bed…and in his heart.