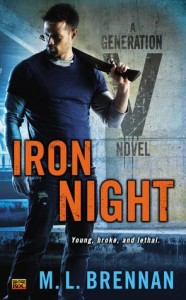 My day then got even worse as I walked back into the dining room and noticed the homicidally envious looks that my fellow waiters were shooting me.  That only ever meant one thing, and I gulped as I went back to my tables.

Sitting in the middle of my section was Suzume Hollis, kitsune, sometime friend, and all-time tormentor.  She caught my eye, raised  her wineglass ever so slightly, and gave me the smallest curl of that smile that always hit me like an electric shock to my spine.  Then, without missing a beat, she turned her attention back to the expensively suited middle-aged man who sat across from her.

I’d met Suzume when my mother hired her as my bodyguard, but after she’d risked her life to save me from a homicidal pedophile vampire we’d kind of become friends.  Being friends with Suzume involved receiving a lot of forwarded e-mail  humor and having to endure her love of pranks.  In the first month alone of being friends, she’d TPed my car twice, sent a male stripper-gram to my door, and broken into my apartment to fill my closet with 237 cotton-candy Tribbles.

Those incidents had been various levels of amusing (particularly the Tribbles, which had been funnier before Gage and I had had to get down to the serious business of actually trying to eat 237 cotton-candy Tribbles), but then Suzume had decided that my work hours were fair game.

All of the kitsune in Providence were the daughters and granddaughters of the White Fox, who had been a geisha in Japan before emigrating to America.  Upon arrival, she’d gone back to what she’d known best and had set up an escort business.  While none of the kitsune actually did any of the escort jobs themselves, they did manage and run all of the other aspects of Green Willow Escorts, and lately Suzume had been put in charge of screening prospective clients.

The other waiters were insanely jealous because Suzume never sat in their sections.  Instead she was always perched in mine, balancing perfectly on that edge where appropriate business attire starts meeting the opening act of a male sexual fantasy.  Today she was in a dark blue silk blouse tucked into a black skirt that ended demurely just below her knee but was so formfitting that I wondered how the hell she maneuvered herself into her car.  The string of black pearls around her neck made her skin look luminously pale, and her black hair was in a sleek yet complicated arrangement held together by two long red lacquered chopsticks.  She had only a little makeup on around her eyes, drawing attention to the most obvious marker of her Japanese ancestry, and making them look even darker than usual.  The man sitting across from her, who probably spent all of his time in boardrooms or wherever rich and powerful men hung out, was clearly already completely enraptured by the time I went over to tell them the day’s specials.

I wasn’t sure if it would make my fellow waiters more or less jealous to know the particular method that Suzume used to torment me during these meals.  Somehow she arranged the conversation so that every time I arrived at the table it was just in time to hear the filthiest, most ear-searing and brain-fragmenting portion of a conversation focused on what particular sexual practices this potential client was interested in.  And each time I had to try to keep a straight face after hearing a horrifyingly salacious fragment concerning people’s front ends, hind ends, or other parts that I’d never even particularly considered, she’d look up at me with the most demure and ladylike expression, blandly asking for another roll or complimenting the most recent dish, and her eyes would be gleaming with foxy amusement.  Meanwhile the rich and powerful men across from her would be putty in her hands, completely eager at the end of that dinner to pay the exorbitant fees that Green Willow Escorts charged.

After an hour of torture, I was finally able to bring over the bill.  As always, Suzume reached for it just a hair too slowly, and the newest client insisted on paying it himself, puffing up with importance as Suzume murmured her appreciation in velvety tones.

The next time I swung around, her dinner partner was gone and Suzume was nursing a cup of coffee.  She always stuck around–she couldn’t stand not being able to gloat to someone.

“Did you like the bit about the hot wax?” she asked as soon as I came over.  With her financial prey gone, she’d dropped her Mysterious and Demure Woman of the East routine and was grinning at me with her usual enthusiasm.

“I am going to have nightmares for a week thanks to you,” I bitched as I started collecting the dessert plates.  Usually I’d leave that for the busboys, but despite my front I could never resist the chance to spend a few minutes talking with her.

“I almost thought you were going to miss the spanking bit, but then you showed up with the reconstructed artichoke.  It was awesome.”

“The food of the other thing?” I asked.  “I would’ve thought that you’d heard every weird sexual fetish on the planet by now.”

“I have,” she admitted frankly.  “But watching your face makes it interesting all over again.”

“Damn it, Suze, he stole the freaking napkin.  You do this on purpose every time.  Get them all riled and worked up, and then I’ve brought the coffee and they have to walk out of here, so they grab the napkin to provide a visual block.”

She gave me a very smug look.

“Are you saying that on behalf of your gender, or”– she swept her gaze downward–“are you speaking from more personal experience?”

“I’m immune to you now,” I said, picking up the pile of plates and stomping off to the kitchen.

Not fast enough, because I could hear her taunting, disbelieving laugh behind me.

She was right.  I wasn’t immune at all.

One response to “Sunday Snippet: Iron Night by M.L. Brennan”