I’m happy to introduce you to author Kathy Bryson who is here today to talk about how her characters torture her during the writing process! Plus learn more about her latest title, Restless Spirits. Please welcome Kathy to That’s What I’m Talking About!

Writing coaches sometimes suggest that you need to torture your characters, that putting them in difficult situations can help move the plot along and give the characters more depth. Well, two books later, I’m here to tell you the truth. It’s the other way around – characters torture their authors! 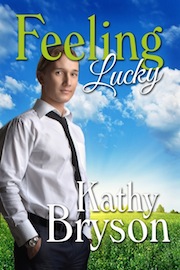 Take Megan O’Malley for example. In Feeling Lucky, she gets tipsy at her cousin’s wedding and pinches a cute guy’s butt. Is that any way for a grown woman to behave? How many of you would go crazy over a cute bum? Okay, you don’t have to answer that. We’ll move on –

The guy she pinched, Fergus O’Reilly, is a leprechaun. And no, he’s not tiny. According to Irish etymology, leprechaun means ‘sons of Lugh’ or the Celtic god of commerce and war. Leprechauns are actually closer to Marines, doing whatever it takes to preserve their gold. Turns out the story of the wee folk is the leprechauns’ greatest trick!

I suppose I really couldn’t expect full cooperation given the play I used as a basis for my story. If you research fairies, Shakespeare’s A Midsummer Night’s Dream comes up regularly. I thought the fairies would be fun, but in that play, the Queen of the Fairies is tricked into falling in love with a donkey. Do you see the mentality I’m dealing with? I really should have thought that through more.

My second book, Restless Spirits shares the same background in fairy folklore, though each can be read independently. Marilee Harper is already on the edge between her difficult mother and the prospect of losing her job. So does she knuckle down and get on with renovating a B&B? No, she does not! She fights with customer service on the phone, fires and rehires the help, and flirts outrageously with her boss!

John Smith, poor guy, I did get to abuse. He’s kidnapped by the King of the Fairies. Shakespeare may have brought a long-standing feud to light in 1590-something, but it’s heating up in the modern-day Midwest. As if the ladies of Fayetteville didn’t have enough to manage with jobs, family, and erratic love lives, they’ve got a civil war on their hands!

So bless my little characters’ hearts, they’ve managed to write me into a corner! I don’t know which side to take, I don’t know who’s going to win. But I can tell you this. I am taking careful note of each character who gave me sass! 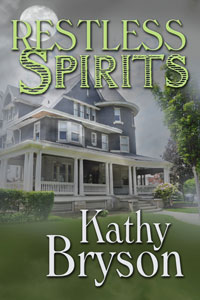 Marilee Harper is desperate to find another job after she accidentally set fire to the home of the richest woman in town. Converting an old hospital into a B&B seems like a golden opportunity. But fixtures turn themselves off and on, and old baseballs fly without help. Stressed and aggravated, Marilee wants nothing more than to redeem herself, even if it means hands off her sympathetic boss!

John Smith has every confidence in the bossy, strong woman he hired. She handled difficult customers at the bank and now she’s handling electricity and plumbing and whatever unseen force keeps throwing baseballs. Who can blame him if he starts to admire the woman in more than strictly professional terms? But when the angry, treacherous King of the Fairies shows up, can Marilee become his champion? 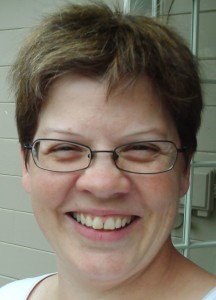 Kathy Bryson knew she wanted to be a writer when she finished reading through her school and local children’s libraries. She spent 20 years honing her writing skills on marketing brochures, websites, and several unfinished manuscripts before going into teaching and finishing a book with all the stuff she enjoys most – from coffee to love to Shakespeare! Kathy lives in Florida where she caters to the whims of two spoiled cats and wonders what possessed her to put in 75 feet of flower beds.