I am excited to have as my guest Rebekah Weatherspoon, author of adult and new adult romance, both contemporary and paranormal. Today Rebekah is here to share with us a little about her upcoming story, Burn, which is part of the All You Can Eat Anthology. Please help me welcome Rebekah Weatherspoon…

Thank you for having me! Whenever there’s a conversation about me offering up a piece of writing, whether it’s a blog post, a full length novel, or a short story, there’s always that moment of pure panic. What in the heck am I going to write about? I’ve had a busy year. Novellas and short story releases almost back to back. My brain is pretty much fried, and the year isn’t even close to being over yet. For this post, being hella busy with release after release gives me a chance to talk about my next bit hitting shelves, Burn, which will be featured in the anthology All You Can Eat.

I’ll let the editors of this steamy collection of works give you a little background on the project in their own words.

First, R.G. Emanuelle and Andi Marquette have done an anthology prior to this. That one, through Bedazzled Ink, is “Skulls and Crossbones: Tales of Women Pirates.” We had a great time with that, though doing anthologies is kind of like herding cats in some respects, because you’re dealing with several different authors and you’re trying to coordinate their schedules with the publisher’s schedule.

So after we did that anthology, we decided that eventually, we’d like to do another one. But we weren’t really sure what topic that would be, so we back-burnered anthologies and focused on other projects. But then we started talking about it again last year. We had floated the idea of doing something with regard to food, but things didn’t really gel until last fall, when it hit us. Food. Romance. Erotica. Duh.

R.G. is a lifelong foodie; she learned food and cooking from her mom, who immigrated from Italy via Argentina. She completed culinary school and worked as a food and travel writer, and also had her own personal chef business for a while.

Andi just likes food, and enjoys the interplay of food, culture, and social ties. So the two of them combined their different perspectives and decided to invite several authors to participate in an anthology whose main themes were food, romance, and/or erotica. They left it pretty open-ended, for writers to explore the themes how they wished, with the primary stipulation being that food had to play some role in the plot.

And then I get an email from Andi. She wants a story and she wants me to include a recipe. I’m flattered. Andi is a great author and it’s awesome that she would want to include me in this project, Problem is, well it’s two fold. One, I hate mixing food and sex. I’m weird about textures and I HATE being sticky. Get kinky with some chocolate or honey or even some whipped cream? No, ma’am. The door is to your left, have a nice day. 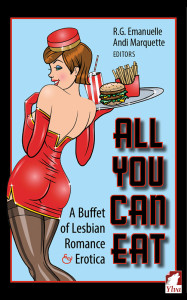 So I panicked and told Andi I had no clue what to write. The second problem involves the fact that I don’t really cook. I can follow a recipe, sort of, but let’s just say a lot of my meals have been tossed and replaced with take-out to save the evening. I panicked and panicked some more until one day in the shower, where I get some of my best ideas, I came up with the idea for Burn.

My last few short stories have been about women who are in established relationships. It seemed appropriate to take the same route with Burn. See, I’ll cook (or microwave) something for a potluck, but ordinarily, if I don’t LOVE you, I’m not cooking for you. I wanted to write about cooking for someone you love, even when things in the relationship are strained. My heroines are going through a rough patch, but they manage to find their way back each other in those few short pages. I used food as a way for them to connect, before they got busy. All You Can Eat features stories from a group of authors I greatly admire and I can’t wait for you all to sample the goods.

Does Like Water for Chocolate make your pot boil over? After watching 9½ Weeks, were you never able to look at honey the same way again? Does watching Cat Cora wield a knife on Iron Chef America stoke your burner? Or are you more the Elizabeth Falkner type? Whether your flame is sparked by sharing some illicit fruit, fulfilling fantasies of being a platter of food, chasing after a sexy deli worker, or just being in the kitchen with a hot woman, food, sex, and romance make great bedfellows.

Chef R.G. and sous chef Andi locked themselves in the kitchen until they had the right combination of dishes and a great group of cooks. The menu includes Jove Belle, Cheyenne Blue, Jae, Cheri Crystal, Sacchi Green, Rebekah Weatherspoon, Karis Walsh, Yvonne Heidt, Ashley Bartlett, Victoria Oldham, and Historia, as well as the head chefs themselves, and maybe even a celebrity guest or two.

Food is an integral part of life, and in these stories, food serves as more than sustenance—it’s a trigger for love, laughter, sex, pleasure, and carnal and sensory satisfaction. Fast food or gourmet meal—you’re sure to find something tasty here. 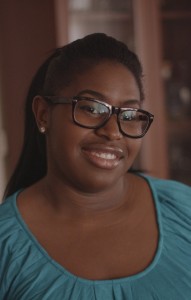