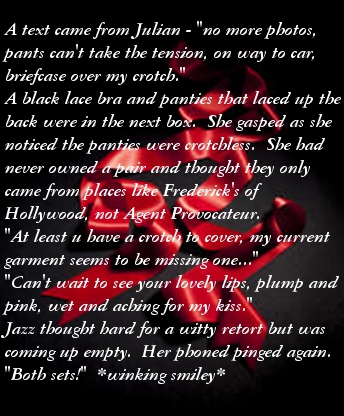 Being with the same man since she was 18, 26 year old widow Jazz Mickelson is hoping to catch up on all the life experiences that could have been hers had she not leapt into a committed relationship so young.

Julian St. Sauveur is looking for three things: romance, comfort and trust. He mistakenly thought he had them once many years ago. He sees potential for him and Jazz but knows it is too soon for her.

Will she accept his unusual proposition, one that allows him to hold on to her while she catches up on life?…and will she choose him after experiencing all the wonders that await her?

Find out as Jazz and Julian explore their potential…

Julian liked what he saw.  He had tried to take a good look at her body without being obvious when he got up to let her by, but couldn’t without being completely conspicuous.  She certainly wasn’t plasticized though.  He did manage to get a better look at her cleavage and a hint of nipple outlined through her shirt when she brushed her ponytail aside.  When he had leaned over to whisper to her not only had he confirmed that those breasts weren’t after market, he was quite intoxicated by her scent.   She was taller than average, had amazingly full lips and beyond dazzling hazel eyes.  Their green surrounded a vibrant gold, rather than the usual brown.  Admittedly, the multi-coloured braids had quite taken him aback at first—now he was curious about this unusual hairstyle.

So far she was receptive to conversation and certainly had an interesting story, although she seemed ashamed of her situation—and was certainly uncomfortable flying luxury business class.  He hadn’t missed the couple of innuendos she’d already thrown out.  He was fascinated and preparing a multitude of questions…most importantly he was devising a plan.  Would she play?

He licked his lips watching her walk away—nice, firm ass, slightly curvy hips, toned thighs.  She walked with a smooth, natural sway…sweet!  Single and travelling alone no less.  He didn’t want to come on like a lech but he couldn’t help the responsive stirring that resulted from his indecent thoughts combined with the teasing tone of her last comment.

He ordered their drinks then followed her.  He leaned against the wall across from the lavatory door and crossed his arms.  Hearing the latch open he positioned himself so she had no option—when she opened the door he was directly in front of her, filling up the space.  She started to excuse herself and attempt to get by when he quickly put his finger to his lips with a Sssh and then put that same finger to her mouth.  He moved her back into the bathroom with a full body press.  He felt the small, soft swell of her belly against the tops of his thighs.  Her eyes widened as she started to blurt out something but he put his finger back to her lips, all the while moving forward with his hips against her. 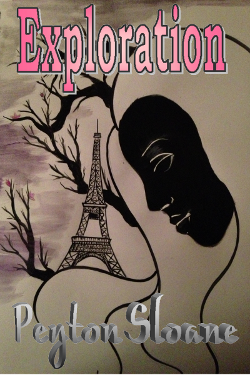 “Well, that should go without saying, unless you’re a complete idiot.  After all we are in an airplane and you have no escape.  What do you want with me that required this action?”

He quickly reached around and with one hand latched the door to the “occupied” position while using the index finger of the other on her mouth again, gently grazing her lower lip.

“I am intrigued by you—I want to get to know you better.”

“And you need to do that in a bathroom?” Her tone was mocking.

“No.”  There was that chuckle again.  “But a bit of privacy is nice to establish the potential.”

“The potential of what?”

“This…”  He brought that index finger under her chin, tilted her face up and bent down, softly putting his lips to hers.

He released her.  “I had to follow-up on my theory that you tasted as good as you smell, both of which are divine by the way…especially your taste…”

“I’m glad your hypothesis has been confirmed.  What now?”

“Well I am going to occupy the bathroom for a bit longer.  You will go back to our seats—our drinks should be arriving.  While you take that first sip of your dirty martini I will leave you with some potential.”  He placed her hand on his groin where his erection was beginning to strain his suit pants.  She gasped and tried to pull back but he held her there.

“I think you know what I’ll be doing while I’m in here…I’ll be thinking of your fragrance and your sweet, soft mouth while I relieve myself.”

His lips brushed her forehead.  He released her hand, stepped to the side and opened the door smirking the whole time.  Jazz looked at her hand, giggled nervously, and peeked out the door praying that no one was paying attention.  She gave Julian a look that said I can’t believe you just said and did that and walked towards their seats.

Drinks were being mixed a couple of rows away and she collapsed down, regaining her composure just before the cart reached her.

“I believe it was Campari and soda.  If not, he’ll be happy with that.  There are only two or three things he ever drinks.”

Further proof the staff was more than familiar with this dazzling, rather intimidating and definitely inappropriate man.  Ensconced in her seat, her drink on her table and her book in her hand, Jazz tried desperately to remain detached and affronted as Julian sat down beside her a few minutes later.  It didn’t help that her panties were now moist and her skin remained flushed.

Peyton Sloane is the only child of amazing parents who are not only still with her but vibrant. She grew up on a grain farm in rural Manitoba Canada. Between the rents and an amazing “aunt and uncle” (farmers a mile down the road), they instilled a love of reading in her at an early age. Her parents never censored anything she read and much of her early allowance and birthday money was spent on paperbacks.

She thought about journalism for college, but this was almost 40 years ago and the nearest school offering it was almost 1,500 miles away, too far for a rural country girl. Instead she studied performance piano, having taken lessons since the age of 5, completely useless in the real world but music was a huge priority in her family and she was surrounded by it growing up.

Making her way through life she has always been able to maintain her reading habit. One of her fantasies has always been to write a best-selling book and over the years she have written down bits and pieces but never went further or explored the publishing world. That possibility seriously didn’t exist when she knew it would be endless rejection and waiting; wasted money on postage. The advent of electronic media and self-publishing has changed all that.

For now, she writes and still holds a full-time career. Her home life is the hubs and their two little divas (Schi-poos from the same litter). Writing is something she hopes to be doing well into her retirement—one of the few pastimes where you are not limited by the scourge of age on your physical being, and, the deity willing, her mind stays intact will still be a passion 25 years from now!