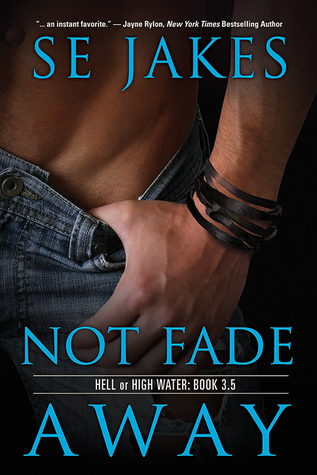 Not Fade Away is a wonderful “slice of life” short set in the Hell or High Water series, which features hard, dark men who run under-the-radar black ops rescues. This story focuses on main characters Tom and Prophet, two men who have overcome tremendous personal demons to find happiness and, dare we say, love. Although Not Fade Away can be read and enjoyed as a stand alone novella, we do not recommend it, as readers will find more emotional gratification from following the pair on their journey starting with the first book in the series, Catch a Ghost.

B.: Taking place during an increasingly rare moment of “peace” (a term which has a very different connotation in the lives of the two main characters), Not Fade Away is a brief, but wonderfully done glimpse at the current state of Tommy and Prophet’s relationship. I absolutely love these two, and was thrilled to see how their abrasive and defensive natures have become so complimentary. Irrevocable choices have been made at this point in their story. Experiences have been shared and battles have been fought. And they’ve come through it all stronger than ever.

Jen: I agree! This time around, we witness a more playful duo, engaging in a game of Truth or Dare, and it is such a change of pace from their normal pace. However, once Tommy completes his dare, the couple becomes distracted (in good way *wink*) and Proph’s truth never comes out. It isn’t until months later (present day) that the unsaid truth is addressed, and the couple successfully jumps yet another hurdle. What happens between the pair is so fitting and serves to only makes their relationship stronger. I adore Tommy and Prophet so much, and I appreciate that despite all of their demons, they now fully embrace each problem and use them to strengthen what they have.

B.: At this point, both Tommy and Prophet have learned that accepting someone else’s acceptance is a daunting thing—and that the possibility of losing it is downright terrifying. But, they’ve each come to the realization that fighting one another and fighting for one another are often the same thing, and that some reciprocal button-pushing will usually lead to a whole lot of mutual satisfaction. These two get each other better than just about any other couple I’ve ever read. And with all they’ve been through thus far, they truly deserve it.

Jen: In addition working through a tough spot, the pair engage in a few glorious moments of intimacy. This story is full of hard core passion, fueled by the emotional intensity always surrounding the duo. Sex is something that the pair share out of love, but they also use it to work through personal issues and anger. While it may be rough and is always intense, there is an underlying tenderness which makes these scenes some of the best out there.

Overall, Not Fade Away is a wonderful, sexy novella, filled with a satisfying emotional punch, especially for those who have followed Proph and Tom on their long journey to love.

Ever since superspy Cillian moved into Prophet’s building, their game of Steal the Couch has been funny to Prophet, but a thorn in Tom’s side. Then Prophet gets bored one night during an ice storm and insists on playing another simple game with Tom: Truth or Dare. In exchange for one of Prophet’s truths, Tom steals the couch one last time.

But Prophet’s truths are never easy—Tom should know that by now—and this one raises questions neither of them quite know how to answer. In response, Tom finds himself laying claim to Prophet in the most basic way he knows how. And also finds that he doesn’t mind it in the least when Prophet returns the favor.

Purchase Info:
Not Fade Away (Hell or High Water #3.5)