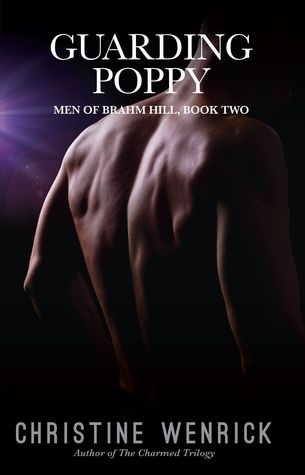 Poppy Honeywell knows she’s cursed. She’s been told that her entire life.  The best evidence, at least initially, that she’s cursed seems to be the fact that she’s desperately clumsy. Not Bella Swan clumsy, but major destruction of property, run for your life clumsy. Born from a witch father and a damphir mother (half human and half vampire), Poppy’s pretty sure her supernatural talents are limited at best, diluted.  What she knows for sure is that someone wants her dead and they’ll do anything to accomplish that.  Her meager powers are not enough to defend herself so she’s lived her entire life on the run, never setting down roots.  After the death of her mother, and being especially close with Joseph, she takes a leap of faith and trusts him when he sends her The Oracle with Alec Lambert for protection.

Guarding Poppy opens with a request from Joseph, Sovereign Elder on the council, based in London, of Alec, to guard and protect the innocent Poppy. Alec already has more on his plate than he can handle after the death of his best friend and vicious betrayal by his uncle, but being one of the men Alec respects most in the world, he would never refuse Joseph.  That one simple request, which turns out not to be so simple, will change Alec’s life forever.

I wasn’t impressed with the first third of the book.  I won’t spoil it, but while we were getting to know Poppy and Alec in a way we haven’t before, the conduct of the rest of the council felt out of character to me.  I liked getting to know what motivates Alec, especially as he’s had to transition from Guardian to Elder at such a young age, but I was as frustrated as he was with the council who are supposed to know better.  I’ve learned, however, that Wenrick never does anything without a purpose, even if I don’t agree with it.  The fact that I was arguing with fictional individuals speaks volumes about her ability to build characters and relationships.  She artfully includes the reader in all her relationships.  We care.  Just when I wondered, where she was going with this seemly out of place plot line, she drops a huge bomb.  Colossal.  It was one I did not see coming and I’ve said that before with Wenrick’s books.  I love it when an author manages to do something unpredictable that still conforms to the established rules of the world she’s created. The rest of the story unfolds with Wendrick’s trademark excitement, romance, and intensity.

Recently married, Kane makes an appearance.  There is humor anywhere there is Kane.  He keeps things real in a world that could easily spin away when you consider the expanse of beings Wenrick has incorporated to this point in the series. The Oracle is basically a training facility for supernatural beings and I was very appreciative of a well placed Mr. Miygai reference.

We got to revisit Caleb and Olivia’s relationship from The Charmed Trilogy.  That was fun.

The epilogue left us with an obvious, huge cliff hanger, something Wenrick has avoided up until this point, so now we wait….and wait…impatiently.  I give Wenrick props for attempting to make up for that fact by giving us a bonus scene that was cut from the body of the manuscript for the purposes flow, but I’m still sitting here waiting.

One night . . . one violent, supernatural battle . . . and five stories of the men whose lives will be changed by it.

Alec Lambert was born to lead. He’s a ruling Elder of The Brethren, possessing steely confidence, natural smarts, and decisive problem solving abilities . . . and he’s not too bad on the eyes, either. Everything in his life has gone exactly according to plan—until the night of Brahm Hill. Alec loses his best friend at the hands of the uncle he trusted like a father, along with his previously unshakable faith to lead those with whom he’s charged. Despite this, he continues to press ahead, and for his next assignment he’s asked to protect a very beautiful but very clumsy Dhampir who’s being hunted by a powerful warlock. Suddenly, he finds his whole Brethren world is turned upside down . . . and he finds himself harboring a desire for her he can’t explain.

Poppy Honeywell knows she’s far from perfect. Bad things tend to happen when she’s around. She’s more than a little clumsy, with a phobia or two mixed in. Not to mention that her name is certainly unusual. But she doesn’t have time to worry about all that because she’s on the run and not about to back down from the arrogant Elder who’s just been assigned as her protector. The real problem, though . . . she’s irresistibly drawn to this man who faces constant danger and takes charge so naturally. But Poppy also sees that taking charge of others helps Alec mask his own very deep pain.

Will Alec find his way out of the darkness and surrender to his feelings for Poppy before the warlock chasing her catches up to them both?

Reviews in the Series:
Someone Else’s Skye by Christine Wenrick (Men of Brahm Hill #1)